Simplicity 2894 - An Out of Print Pattern in Denim

Or as a subtitle ~ "How Carolyn Complicates a Simple Pattern!" 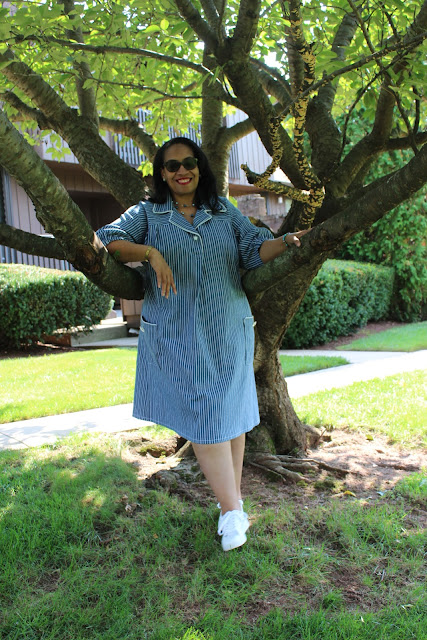 This Simplicity pattern has been out of print for awhile.  The first review on PatternReview is from 2008 and it's been on my "To Sew List" every summer since Rachelle made her version. However, it really didn't fit my lifestyle when I purchased the pattern...I just loved the style. 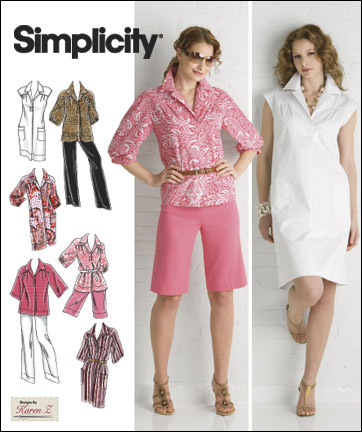 Fast forward a couple of years and I pulled the pattern out again last summer to make a dress. I had the perfect striped linen for this but summer slipped away from me, again. However, this pattern has lingered in my mind and while it didn't get made in a summery fabric, it was perfect for some mid-weight denim for a new fall dress.

Of course I never do anything simple so I had to manipulate the stripes for added interest and I added a white piping to the collar and front opening to bring some definition to it.

Let's talk materials ~
The fabric is a midweight striped denim purchased from Fabric Mart earlier this year.  Since you don't need buttons or a zipper for this dress, the notions I used to make my version of this dress are:

Construction details ~
I really wanted to mix up the stripes on this dress. Since the yokes are separate pieces, I cut the yokes on the lengthwise grain instead of the horizontal grain like the body of the dress. What I didn't count on was the difference in color shading that occurred when the two pieces were sewn together. When it was all said and done, I was fine with the color shading because it's a casual denim dress. 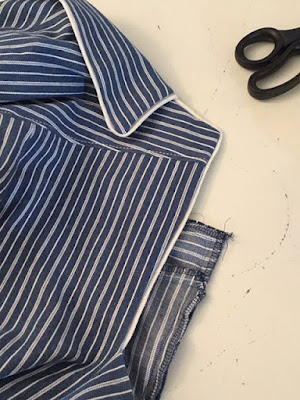 After I added piping to the collar, I decided that I needed some on the front opening too.  So *sigh* I added piping there too. What an ordeal...I was gonna say challenge but I added a couple of hours work to a simple dress adding piping in the front of the dress...and was on pins and needles while I was doing it hoping that it would work the way I wanted it to...breathing a huge sigh of relief when it did work!

The last change I made to the dress was after taking the time to match the pocket stripes to the dress front, I decided to add piping and a large white button to the pockets. Why not just leave them be? I mean they would have been fine but they wouldn't have popped...and I wanted the "pop" appeal for the dress.

Topstitching was the last decorative element that I added to the dress. It's on the yokes - front & back, at the hemline and on the pockets. Again I used the triple stitch with a length setting of 5 on my Janome 8900 QCP.

Can I state yet again what a challenging sew this was. Honestly, I took a very simple pattern and I added a whole bunch of design elements to it. Yes, the design elements did elevate the finished dress, but getting there was a pain!

A few pictures of the finished dress ~ 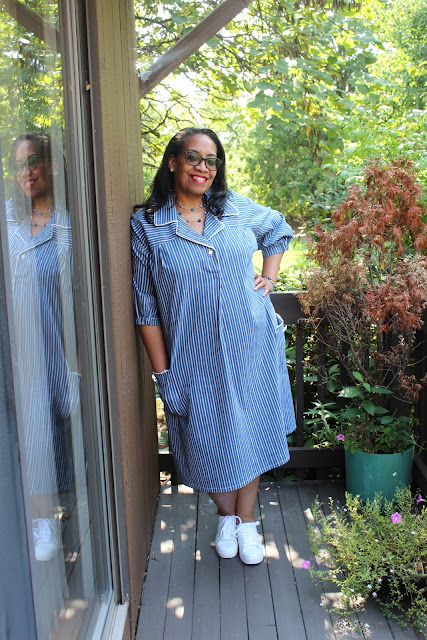 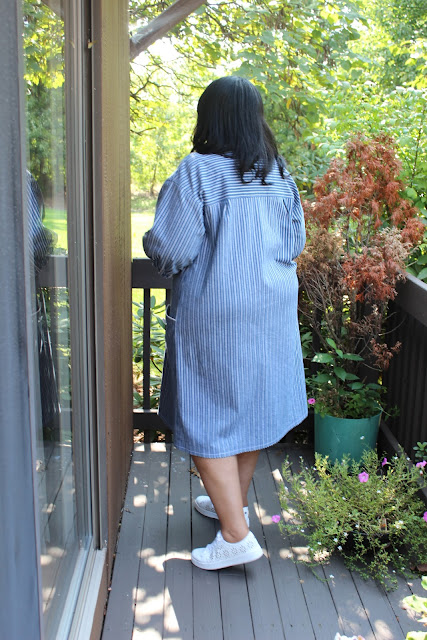 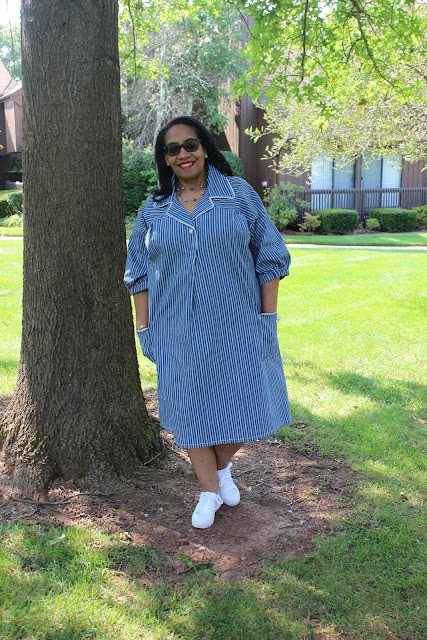 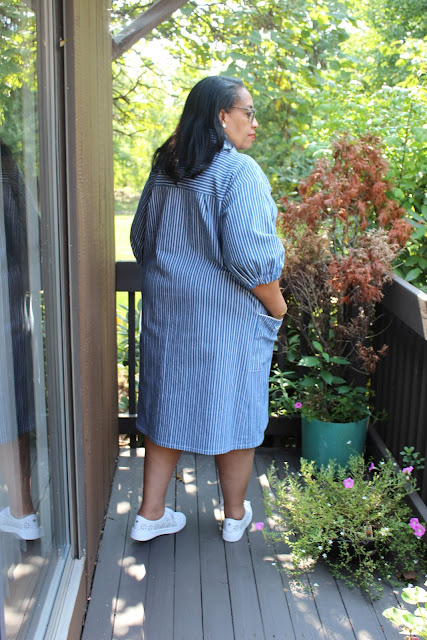 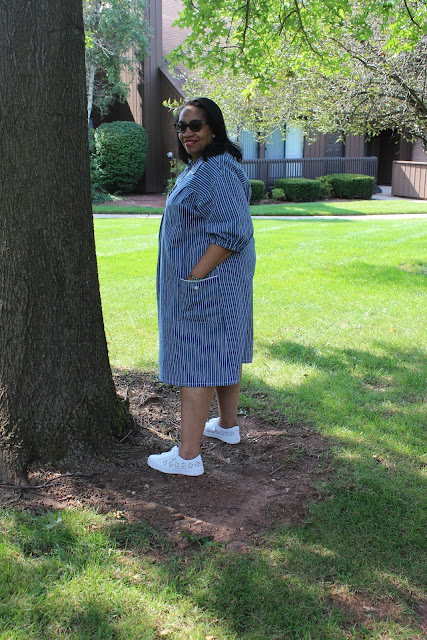 Conclusion ~
I'm glad that I made the dress, it's such an easy and casual wear. I'm glad that I waited to use this pattern because this is the right time for it. I'm also glad that I love the dress now that it's finished! LOL! This was definitely a one and done pattern. As cool as it is and as thrilled as I am to add another denim dress to my wardrobe...I won't be making another one of these.  I'm moving onto my next fall garment.

Finally, it seems like it's become a thing for my daughter to take pictures of me with the grandbabies while they're here...so I'm ending this post with two pics that I liked of the babies and me... 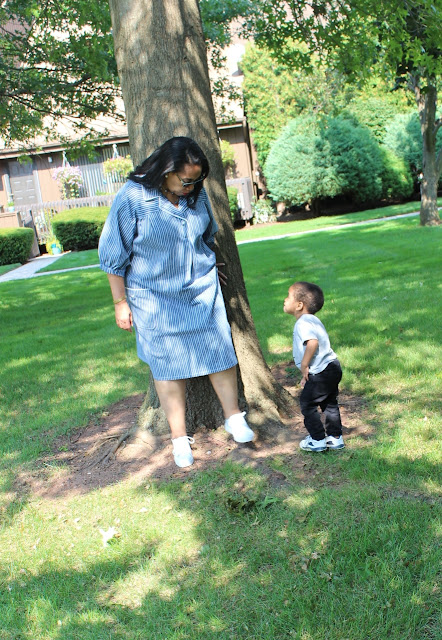 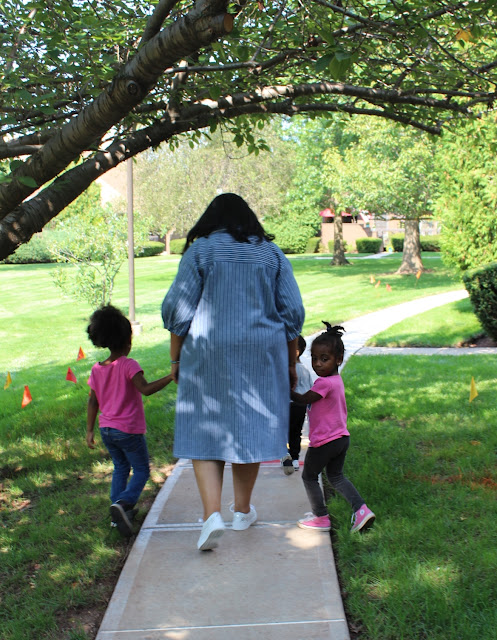 Me and all three (Aleena, Samantha and Joshua) walking together