61 Years Being Black in America

I was watching commercials the other day and I was struck by two things...
One was a recycling commercial - and all I can think is that as a child we recycled everything.  Milk was delivered by the Milkman and we washed the bottles out, put them back in the steel box on the porch, and the Milkman took them when he delivered our new order.  This was in 1970.  We were given paper bags when we shopped at the supermarket, unless we shopped in a small store.  Then we took our own cloth bags. Arts and crafts at school were done with recycled coffee cans, toilet paper & paper towel rolls and popsicle sticks that we washed off and brought to school.
Recycling is not new.
Another commercial was about black people using black businesses. I had a black pediatrician when I was a little girl.  My recollection is that white doctors didn't really mess with black people. I remember having to be courteous and well behaved as a little girl when we went to the white people's pharmacy.  My mother insisted we use that one because she was a nurse at the local hospital and knew they had the most current drugs.  The corner store was run by a black man.  I got my hair done at the black beauty parlor and I went to an all black church.
Most of my dealings were with black businessmen when I was little because integration hadn't really taken place yet...and I was raised in the Northeast.
I was called a nigger at 5 years old.  I knew white people were different and lived different lives from black people because it was constantly pushed in my face. My kindergarten teacher was amazed that I was well spoken and could read, that my Mother read to us at night before bed and wasn't a domestic. I grew up in the Northeast.
I was never told I was pretty for a black girl.  You know why?  Because I was a light-skinned little black girl with long brown hair in braids to my waist. White people appreciated that I looked more like them...other darker black skin people not so much.  But that's a different tale for a different day.
When my parents bought a home in a predominately white neighborhood, one by one the houses on the block were sold by the white families. In two years, my entire block was black. The next block was mixed for probably the next five years. They made it harder for black folks to buy houses on that part of the block. By the time I graduated from high school there were only two white families still living there.
I was ten when they burned a cross on a black family's lawn three blocks from my house. And I was eleven when New Jersey made integration mandatory in towns, so I was bused to middle school to make the town racially balanced. BTW, the white kids left in my area, walked to school. I WAS bused thirty minutes away. The only good thing about it was that we were bused to a brand new school.
In high school I was pretty popular with my peers and their parents. But in my sophomore year our town experienced race riots at our high school. I was on one of three buses of ALL black children trying to leave the campus. We were surrounded by white parents who shouted, spit on us and called us every racial epitaph but a child of God. It was 1975. I was a sophomore in high school and some of those very parents had complimented me for a drama club performance not two weeks before.
I lived in a predominantly white town in New Jersey in 1975.
I won't even begin to detail the micro and macro-aggressions that occurred as I started working.  Things other black friends and family members had a hard time with because they'd grown up in predominantly black towns and went to black colleges. I thought I knew white people having lived with, gone to school and college with them, but even I was surprised sometimes by the racism, cronyism and downright ignorance.
All this to say, I haven't been sewing.  The news still feels like a foot on my chest and I'm having the hardest time breathing. I'm actually relieved that I don't have go to work every day because being the only black person at my firm, I don't have to act like this shit doesn't bother me each and every day. That I'm not constantly worrying for my black sons, grandsons and my brother. 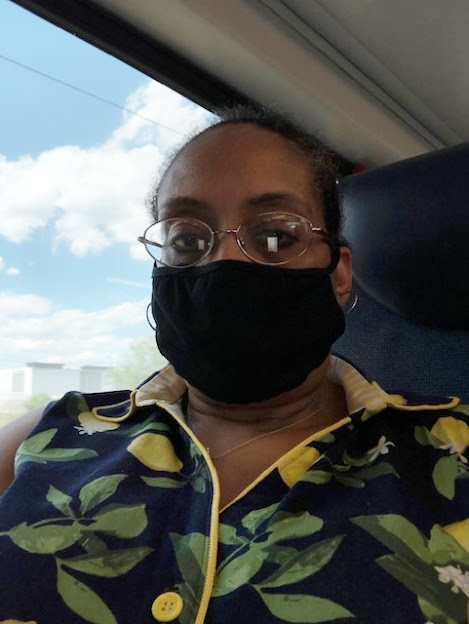 Wearing my mask on NJTransit
(public transportation) headed to NYC
...let's not add Corvid-19 into the mix and how it's rearing it's head everywhere people think it's a political decision to wear a f*cking mask! A MASK - that protects not only others but yourself from catching a life-threatening disease.
My sewing is stifled by all of the things occurring around me. Now I take responsibility for letting this affect me. However, I'm STILL not capable of sewing garments and taking pictures to share on social media while the world seems to be going to hell. So my blog sits dormant. I've bought no fabric. I've sworn off Hobby Lobby, Michaels & Joann's and the NYC Garment District just opened for business with social distancing last week. Although, I'm still working from home for the next couple of months...
This is where I'm at...maybe there will be more sewing later in the month. Maybe there won't be...
...as always more later!
Posted by Carolyn (Diary of a Sewing Fanatic) at 10:40 PM 113 comments:

It's been over three weeks since I've posted to my blog because the events currently going on in the United States have TOTALLY overwhelmed me. While I've expressed my rage on my Instagram account, I've basically ignored my blog because it's easier to repost than to actually sit down and describe my anger, hurt, anguish and pain.

As we all know, George Floyd was murdered on May 25th. The civil unrest both in the US and globally, the subsequent self-examination of a segment of the white population in America and the protesting that's happened, has consumed me. I've felt mostly rage...too much rage to speak as I normally do here in calm tones.

So I've remained quiet in this space. I wrote a blog post for The Sewcialists because it felt like the right place to rage against the injustices that are done to black makers in our crafting communities...and even after I wrote it I had nothing to say here.

In all honesty I still don't. So I'm going to direct you to two black bloggers who spoke more eloquently about this than I can at this moment - Renee (Miss Celie's Pants) wrote this. Then Elaine (lanieemakes) wrote this.

Following and reporting on the tepid and half-ass responses of the major sewing machine companies, the craft store, that alt-right supposedly Christian craft store, and the pattern company that's been bought for the third time in 3 years and wondering why they're losing market share has eaten away at my desire to sew.  So sewing has been pushed to the bottom of my list and I'm clawing to restore it to the top.

This time I've chosen not share my feelings cause dayum if you don't understand by now, it doesn't matter what I type here, you're not changing your mind, your attitudes, or your practices.

I'm closing the comments. This is NOT a conversation.  This is a place holder post ~ just like the pandemic caused a pre and post Corvid reality so did the murder of George Floyd. Which side of history are you standing on because things are changing...Yes, times are a 'changin!

I don't know when I will be back with new makes...because suddenly it doesn't seem important anymore. But hey, if getting back to normal is your jam, just avoid this space for a minute...

Posted by Carolyn (Diary of a Sewing Fanatic) at 12:33 PM