Do you own a Black Shirt?

I know all of the fashion pundits tell you that you should own a good white shirt. It appears on all of the Top Ten lists. However, if you think about it, you could use a good black shirt too. It would work with a black skirt (denim or otherwise), a pair of trousers, jeans or leggings. 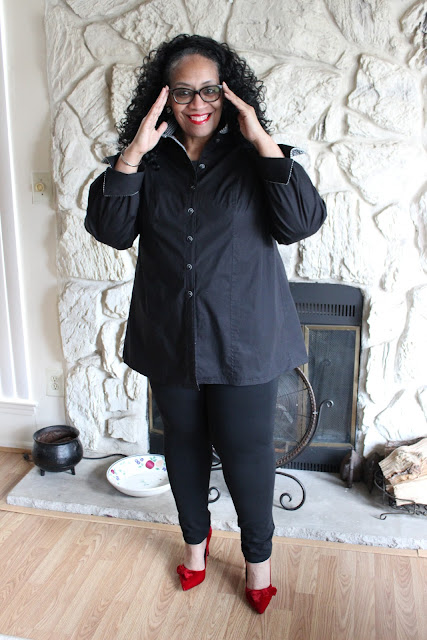 So do you own one?  I didn't. It came up last summer when I wanted to make a jumper/sleeveless dress for fall. I had a pattern, the fabric ~ a black/brown wool blend check, tights and shoes but no shirt to go under the jumper. So it didn't get made because I was missing a vital element to make the look work. 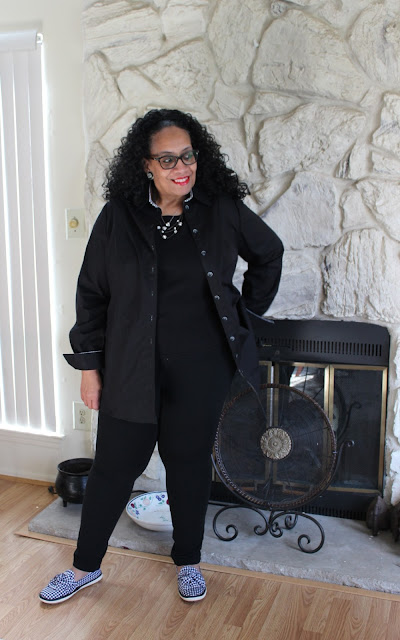 Then I started to think on it and realized I didn't even own any black shirting fabric...which started it's own search. I didn't even ask myself the question of why didn't I have any with such a large fabric collection...because the answer was simple...I'd never needed it before.

Supply List ~
I found some at Fabric Mart of course. It's a 100% cotton, 57" wide fabric that was the deal of the day for $2.99 per yard. At that price I bought 10 yards. This was purchased last fall and was on the website until recently when it sold out.

The black 'n white gingham is from the collection and I've had it for over 10 years. I bought it to be accents on a white corduroy denim type jacket that still hasn't been made...*sigh.*  Even though I used it for accents on this shirt there is still plenty left for the corduroy jacket, some day. The buttons are from the button collection. That makes the shirt a total "from collection" sew. Yes!!!

Construction ~
Imma be honest. When I sew shirts I don't flat fell the seams. I guess I should care about using the technique but I don't...I just want a shirt to wear. So my seams on this version are serged finished first, stitched together and then topstitched down.

My TNT shirt pattern has the button band included on the front of the pattern. It also has front princess seams. The back has a yoke and a gathered one piece lower back. The set in sleeves have a band that can have an opening with a button and buttonhole or a band that's just added to the bottom of the shirt. I've made this shirt eight times with a variety of changes, most of them detailed in this blog post.

However, if I want to have a different fabric for the back of the button band, which is what I wanted in this version, I had to make a change to the pattern to achieve that look. It was a simple alteration. I redrew the front pattern piece leaving the 1/2" past the center front on the pattern.

Then I drew the button band piece with 1/2" seam allowance and the rest of the band from the front pattern piece. 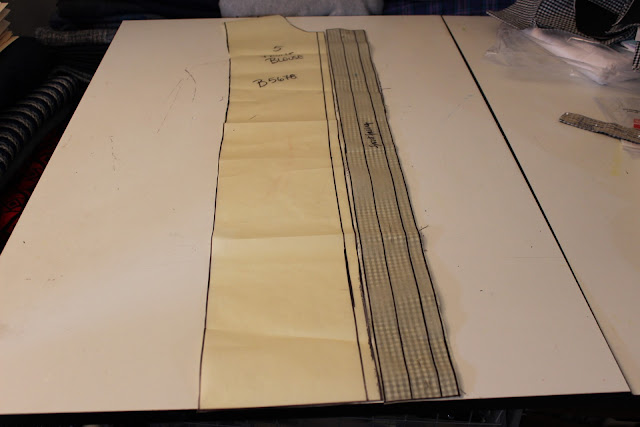 For this shirt, besides the front band in black 'n white gingham, I added a fold up cuff using the gingham for one side of the cuff, inside the collar stand and the back yoke. 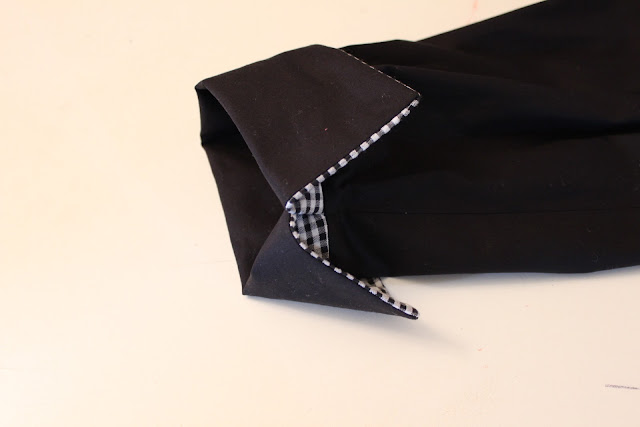 Since I usually add a label to the back yoke of my shirts, when I went to add this one, it kind of melted into the background. So I sewed the label to a piece of the black shirting and finished the piece by using my pinking shears. It was then stitched to the yoke. 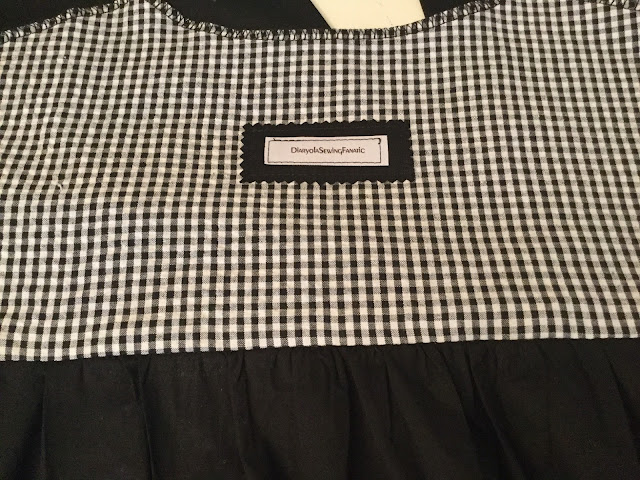 It's not a huge detail but I love how it's just one more thing that adds to the fabulousness of this shirt. 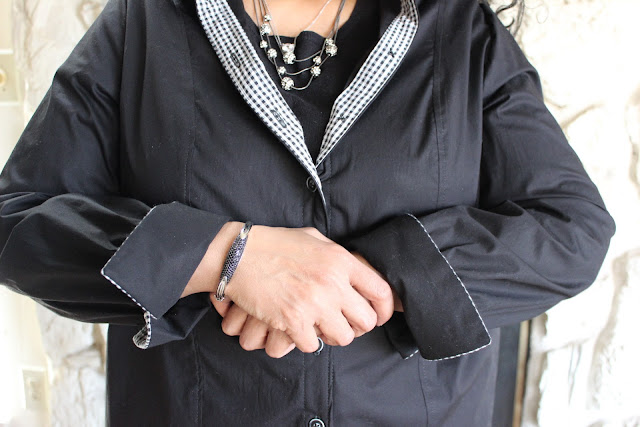 The inner band and sleeves with cuffs

A few pictures ~
...taken with casual shoes which I thought were black 'n white gingham...Surprise! They're blue!!! 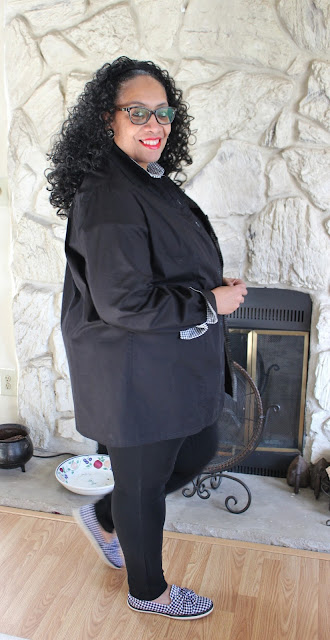 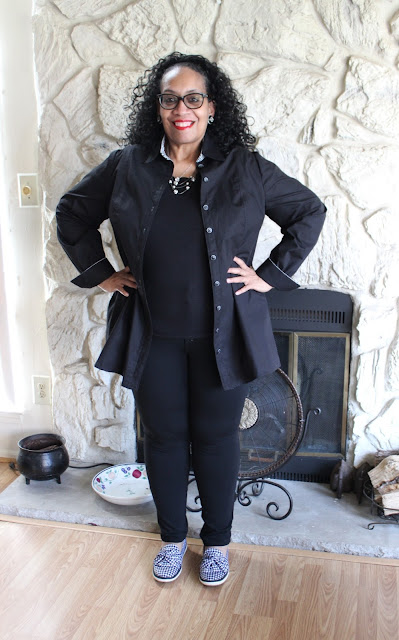 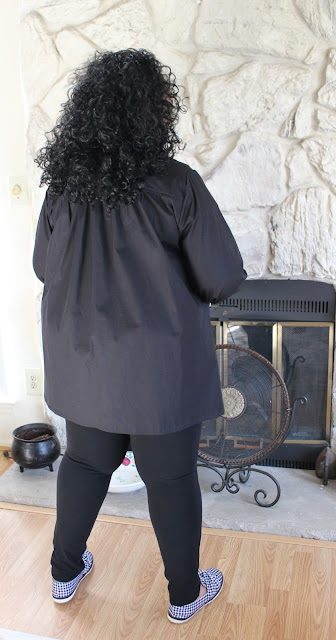 ...taken with red velvet heels...to wear out with friends. 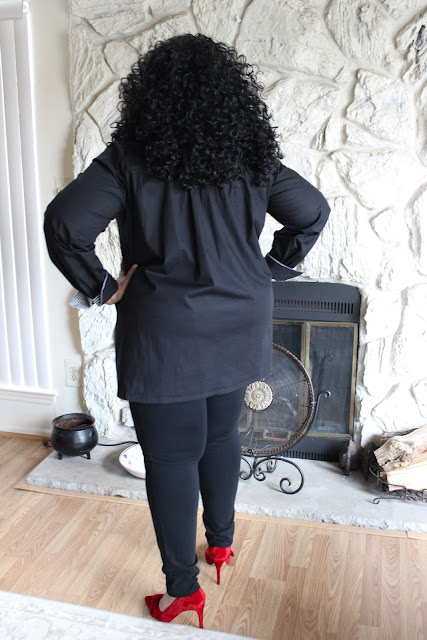 Conclusion ~
I've worked out all of the issues with my pattern and have the perfect shirt pattern now. This look is becoming my daily uniform. Its so comfortable to wear that I've decided to use different details for future shirts to make them distinguishable. I've been inspired by changes Cennetta made to several of her versions, as well as this Instagram post. Her post has really challenged me to think outside the box when adding fabric details to my shirts.

As you know, this will not be my last shirt this month or this year. I counted. I have enough fabric to make another two dozen shirts and that's only including one from each of the 10 yards of white & black shirting I own. *sigh* Yeah I kinda went for it when I started buying shirting fabric but I blame Fabric Mart and those amazing sales for that - TOTALLY! LOL!

Lastly, lest you think I've forgotten about the Crazy 8 Wardrobe ~ this is item number 4 from the wardrobe. It's also the first shirt I made when I decided to make a bunch of them.

The next shirt on the blog to celebrate "April is Shirt Month" is a chambray dotted shirt...