...well not really a road trip but it d*mn sure seemed like it because we took the munchkin and I've forgotten how much stuff you have to take with you when a small child is involved!

Anyway, I went to Princeton today to visit my local Talbots store.  I've been oodling and oodling the goods online and I really wanted to touch them in person.  Plus it was such a lovely spring day here on the East Coast that it was just too nice to stay inside.

So we set off to Princeton, me, the darling daughter and the little one.  Who is such a flirt!  Seriously, dude just lit up as woman after woman proclaimed his cuteness!

There use to be a Talbots Woman store in Princeton but there's only a Petite and Regular size one now...so even though I didn't get to try anything on...I did get a sense of the fabrics that they are using in their garments.

The ones I specifically looked at were: 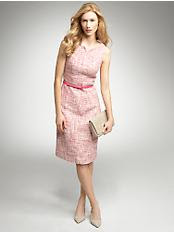 This tweed sheath is displayed prominently in their catalog, as well as on their website, with a cute floral cardigan sweater.  I thought the tweed fabric would be thin but it is a medium weight tweed.  Great for early spring and spring-like temps.  I don't think I would wear this dress during the hottest days of summer but would definitely pull it back out for the first crisp fall days.  I wasn't as impressed with the cardigan shown with the dress.  The fabric is thin and since I use cardigans during the summer to keep me warm from overly air conditioned places, this one wouldn't have provided much comfort.  However, I did like the mother of pearl shank buttons that they used...and will be using that on a garment of my own in the future. 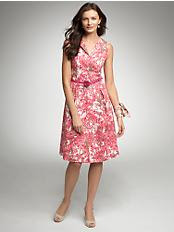 This shirtdress again exceeded my expectations.  It is constructed from a firm medium-weight linen with a lot of body.  Of course the dress is lined with an invisible zipper in the back...so even though the dress has its design roots in the early 60s, it is missing that side zip...which I've never fully understood anyway!  I was glad that I got to touch both dresses, even though Talbots website has considerably more dresses than the store does.  However, I have a much better idea of where I'm headed with creating my own spring dresses.
Of course there were shoe stores...Nine West and Aerosoles along with the shoe departments in Talbots, Ann Taylor, J. Crew and Banana Republic.  And all of these stores are featuring nude colored shoes.
I like Nine West shoes, they just tend to come in heel heights over 3" which is my absolute cut-off for shoes.  Gone are the days when I can tip around in high, high heels *sigh* so I have to make it work with lower heeled ones.  However, I tried this pair on: 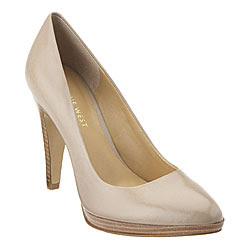 And I really wanted to take them home with me but since they were just a little over 4" heels, I left them.  Even though, I've really, really wanted some platform pumps, ultimately I decided to take this pair instead: 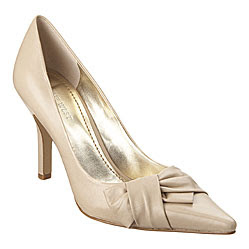 ...which are really more me!  They also received the "seal of approval" from the Significant Other so I guess they are keepers.  He actually grinned quite broadly at them so I guess I did good!  Although, I did manage to find this pair: 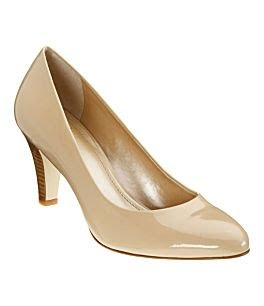 from Dillards - they are a tan patent leather with a 2.5" heel...and this pair: 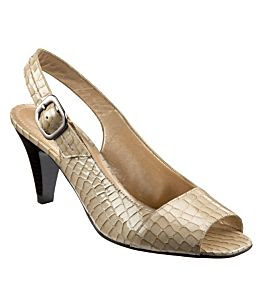 which are a slingback...my ultimate favorite type of shoes to wear.  So now I'm in possession of three pairs of bone heels.  I think I went a little overboard! *LOL*  Won't need any more of these anytime soon!   Or maybe since I'm not really buying fabric...I've probably replaced buying fabric with buying shoes.  As you'll see in the upcoming months, I've bought quite a few pairs!
Anyway...that was my day trip...a little snoop shopping, a little shoe shopping...and a great lunch with my darling daughter & the Little Prince (who was so well behaved in the restuarant - but I think that had more to do with the great french fries than the stimulating conversation!)
Tomorrow I will be sewing...so more later!
Posted by Carolyn (Diary of a Sewing Fanatic) at 8:07 PM