In Search of a Relaxed Fit Jacket

Even though I featured several versions of a collarless jacket with set-in sleeves in my last post, in actuality I prefer a jacket with raglan sleeves.  I don't know if it has to do with how much activity I do during the day at work or the fact that I have very plump biceps but I am just more comfortable in a raglan sleeve jacket. 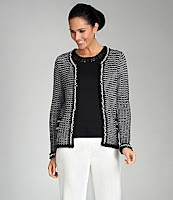 So yesterday when I was trying to figure out what to work on next, I saw this really cute sweater jacket on Dillards' site and I thought that's what I really want!  A jacket that has that soft, sweatery look and is slightly more constructed than the cardigans I adore but will still work with the dresses, skirts and pants in my wardrobe.  To that end, I went rumbling around in the fabric closet looking for a great tweedy knit to use for my version of the Dillards' sweater jacket.

Up on the top shelf of the closet this piece winked at me: 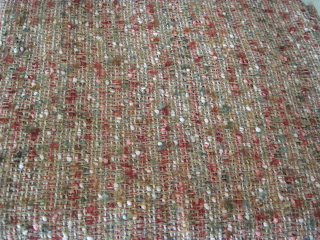 Now this piece has been in the closet for at least five years and I truly thought it was a knit.  So I grabbed it...pulling down several other pieces in the process...convinced that it was a knit and would make a great sweater jacket.  Only after getting it into my hands did I realize that it was a very soft tweedy WOVEN.

Did that stop me from using this fabric, heck no!  Obviously it was time to leave it's flat fold status behind and move into the 3D world!  What I actually said to my daughter was that if it worked out fine...and if it didn't that was okay too because I have plenty more fabric...an understatement right?! *LOL*

Now I've been promising an update of the black doubleknit version of Simplicity 2958 jacket...but the problem is that I really don't like this jacket as is...and I have no motivation to make it better because...

...this jacket has wadder written all over it...but I hate wadders.  I always try to rescue them or rework them but I'm crying uncle on this one because it has way too many "don't likes."  However, I am still intrigued by the jacket pattern primarily because of the raglan sleeves.  So what to do?  Why alter the heck out of the pattern to get the look that I want.

* I added 2" at the waistline on both the front and back pattern pieces.

* An additional 2" were added to the hemline of both the front and back pieces.

* Two inches were added to the center front of the jacket front.

So here is what the front piece looked like out of the envelope: 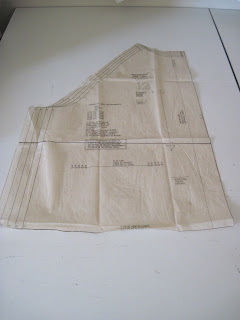 and here is the altered front piece: 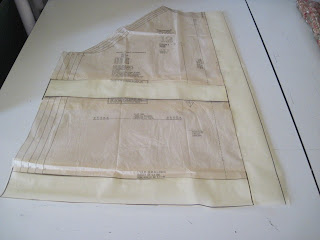 The back piece out of the envelope: 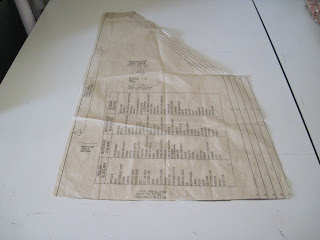 the final back piece: 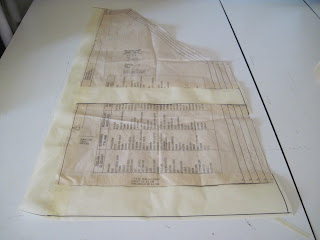 I know I originally said that this pattern would work for me right out of the envelope...and I guess it would if I wanted a too short, too tight, funny looking jacket (if you aren't catching it I'm saying I was wrong here people! *LOL*)...but the pattern alterations make it much more appropriate for me now.

Since I'm such a tease and this post is getting quite long, I will leave you with a picture of the jacket...and talk about the construction of said jacket in the next post... 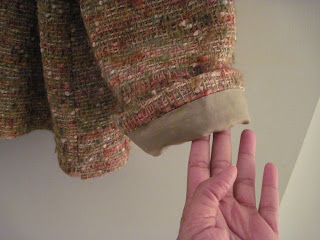 I guess I wanted complicated rather than easy after all...