When I picked up this wool/poly blend gingham from Mood, I knew exactly what I wanted it to be.  A sleeveless version of my TNT dress with white piping... 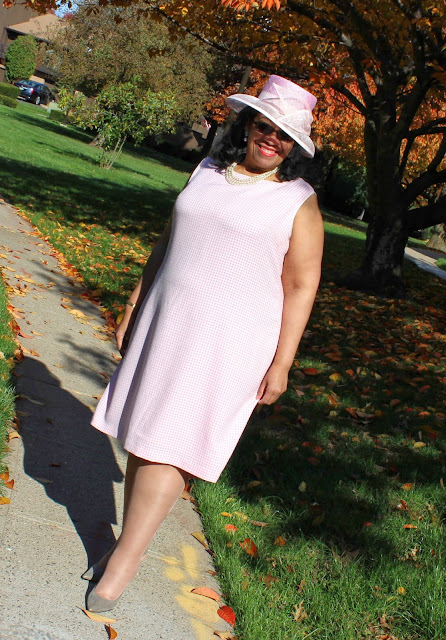 I played around with several other options but I kept coming back to this simple silhouette which highlights the fabric because that's what I really wanted ~ to highlight the fabric.  Here are a few ginghams from the Mood online store. 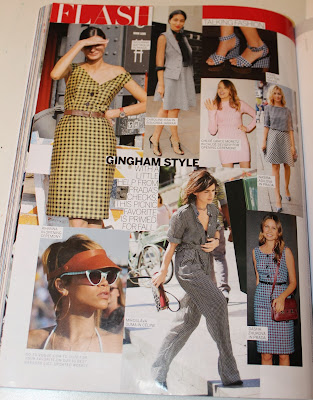 I saw this picture of gingham style outfits in the November 2013 issue of Vogue Magazine and I knew I was on the right track.  Even when making my wool boucle jacket, I knew that I really wanted the two pieces to work together... 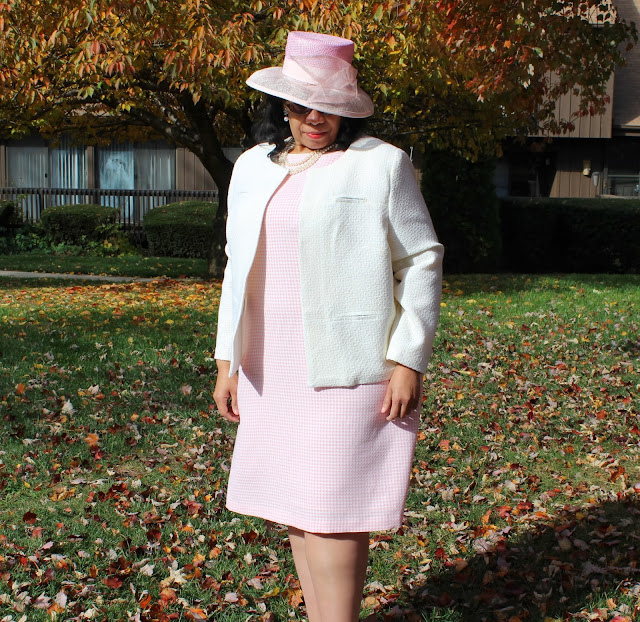 Construction Information ~
Since this dress is made from my TNT dress pattern, which I've made quite a few times already, it was a simple sew. After I pre-treated the poly/wool blend fabric, I had a few decisions to make. I couldn't decide whether to go simple and let the fabric speak or add some obvious embellishment like lace. I finally went with simple because it can be dressed up or down. So the dress is lined with white bemberg rayon lining. It has an invisible zipper closure and white piping at the neckline and armholes. All of these techniques have been reviewed here in other blog posts. Highlighting the amazing piece of fabric was what I really wanted and what I went for in the end. 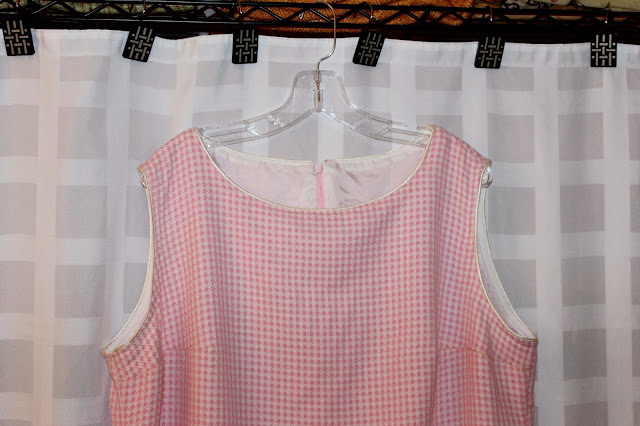 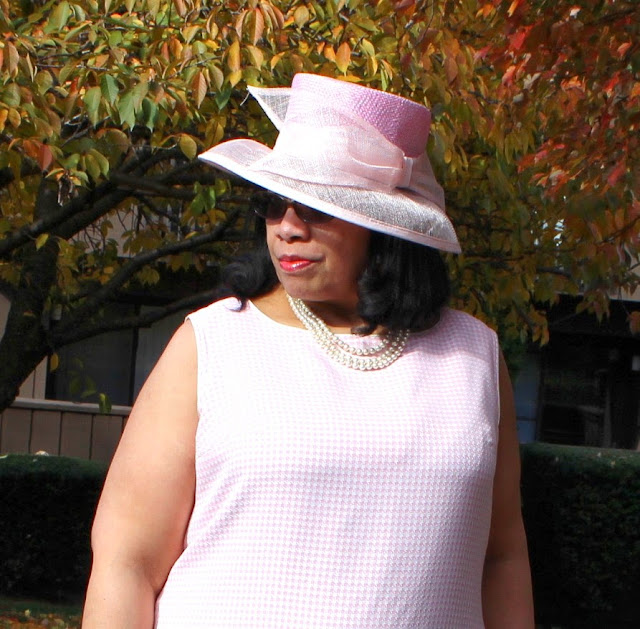 At one point the boucle and the gingham fabric were laying on the sewing table together so it was just natural to make the dress to coordinate with the jacket.  Plus doesn't my pink hat look amazing with the two pieces?  And even though it's fall, I definitely have a pastel vibe going on which is also a trend for fall. 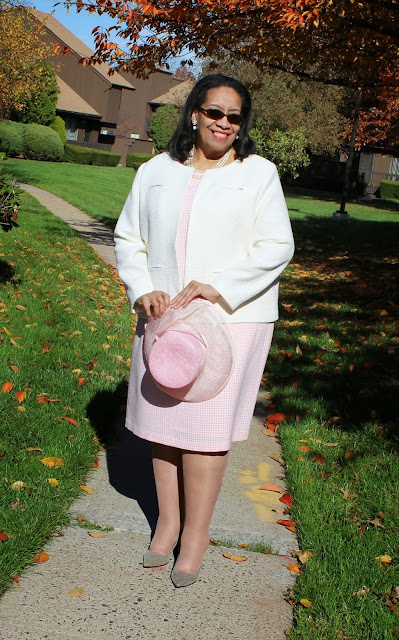 A few more pictures of the jacket, dress and hat... 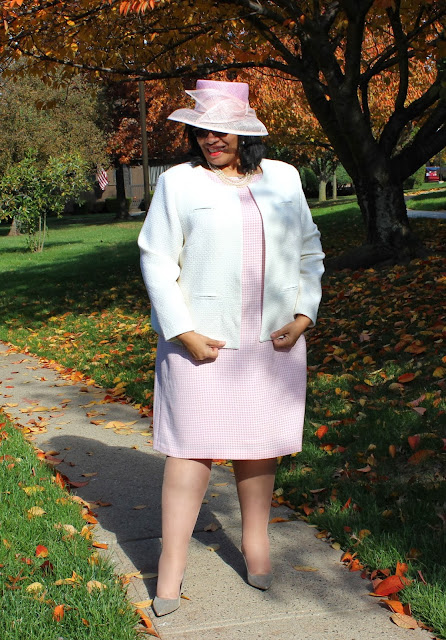 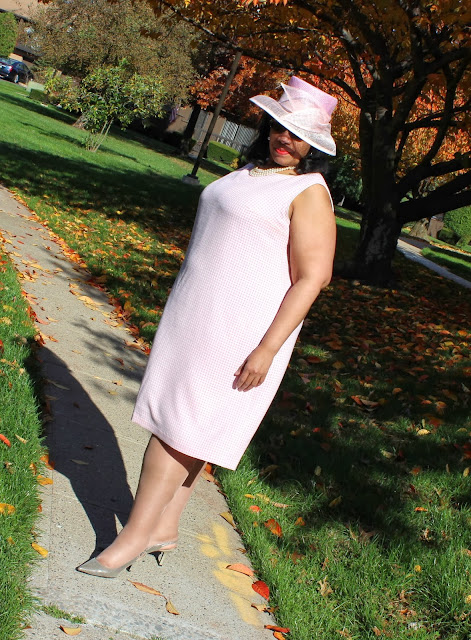 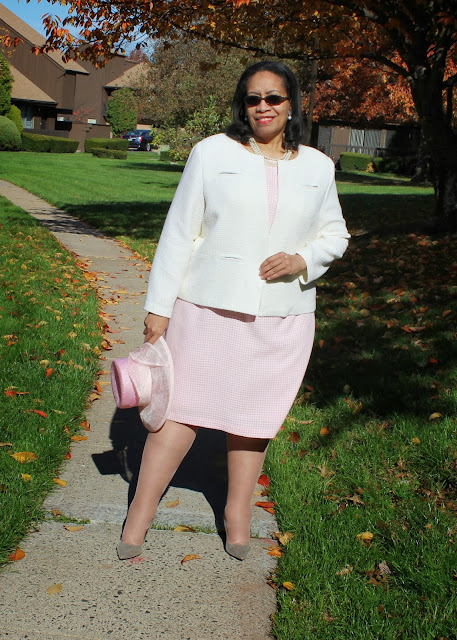 I know that many sewists enjoy the challenge of making a variety of patterns. Me, I just wanna sew and own a lot of clothes.  Yeah I said it! *LOL* When a silhouette works for me and can be made on trend through fabric and styling, I'm going for it using a TNT pattern over and over every time!  Most people who don't sew don't even notice that it's the same silhouette/pattern anyway.

One more thing...about the photos.  These were taken with the new camera on the same day that the last post's pics were, so I had no opportunity to put the tips that everyone so generously shared into action.  I do understand about the shade/cloudy day, golden hours of photography giving the best pictures but I have to admit that I like the drama of the sharp background highlighting the garment. I can honestly tell you that we took 100+ photos last Sunday. Then my daughter and I sat in front of the computer and culled it down to about 30 pics. After that we culled again, then cropped and changed the exposure on some, that's how the final pictures were chosen.

I won't belabor the taking of photos in too many more posts because it's getting colder and honestly I'm going to have to head inside soon. I felt so bad last Sunday because at one point my granddaughter kept going "Mama I'm cold!" to her mother, the photographer. So the bad is coming soon peoples ~ cause I still have to learn how to take pics with a remote by myself. I'm sure that's going to be an adventure unto itself! *LOL*

Lastly, I have one more dress that I want to make and it's not from the Five in Five collection.  I fell in love, seriously head over heels in love with this dress from the latest Vogue Pattern release...and I HAVE to make it now. 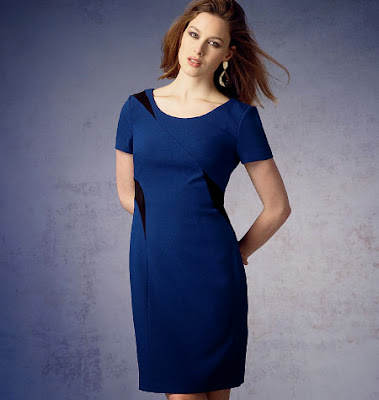 I've ordered the pattern and am waiting for it arrive...I have an idea that I'm chomping at the sewing machine to make.  I'm also going to make a muslin, yes you heard me...a muslin for the Butterick coat.  I want to make this correctly, no jerry-rigging so look for that muslin soon!  Shew that was alot right?

...as always more later!
Posted by Carolyn (Diary of a Sewing Fanatic) at 6:00 AM