It's been a long weekend full of family, food and Christmas decorating.  Have I ever told you that I don't really like to put up Christmas decorations?!  Well I don't...mostly because you have to take them down! *LOL*  I mean I love the way homes are done up for the holiday and I'm especially in awe of those who spend quality time lighting up the outside of their homes.  However, if I could pass that up or better still decorate the tree, roll it into a closet and roll it out year after year, I'd probably be happiest!

With that longwinded introduction, I'm sure you're wondering if I sewed any this weekend?  Well actually I did!  I finished Vogue 8840 and a sweater vest and skirt combo. I love all three pieces but photographing them proved to be quite challenging.

See it's getting dark outside by 4-4:30pm lately which cuts into my Sunday sewing time considerably! Honestly, I'm just getting geared up good on Sunday, so to stop by 2pm to take pictures hasn't quite jelled with me yet. It seems like just a few weeks ago, I could sew until 5-6pm and then take pictures to post to the blog. So bear with me while I get adjusted...*sigh*

Anyway, Vogue 8840 is done and I have some so-so pictures to share.

First though a little construction information.  The pattern alterations I made are in the proceeding post. Otherwise, this was an easy sew. I did check the pattern instructions but since I've altered the pattern to make it a jacket instead of a top, I didn't follow them exactly.

The facings that were added to the jacket needed a little extra work to keep them from flipping out.  Besides edge stitching the back facing, I added topstitching to the neck, center fronts and hemlines of the sweater jacket. Then I stitched in the ditch, in the center back seam and both shoulder seams, to prevent the facings from flipping out. 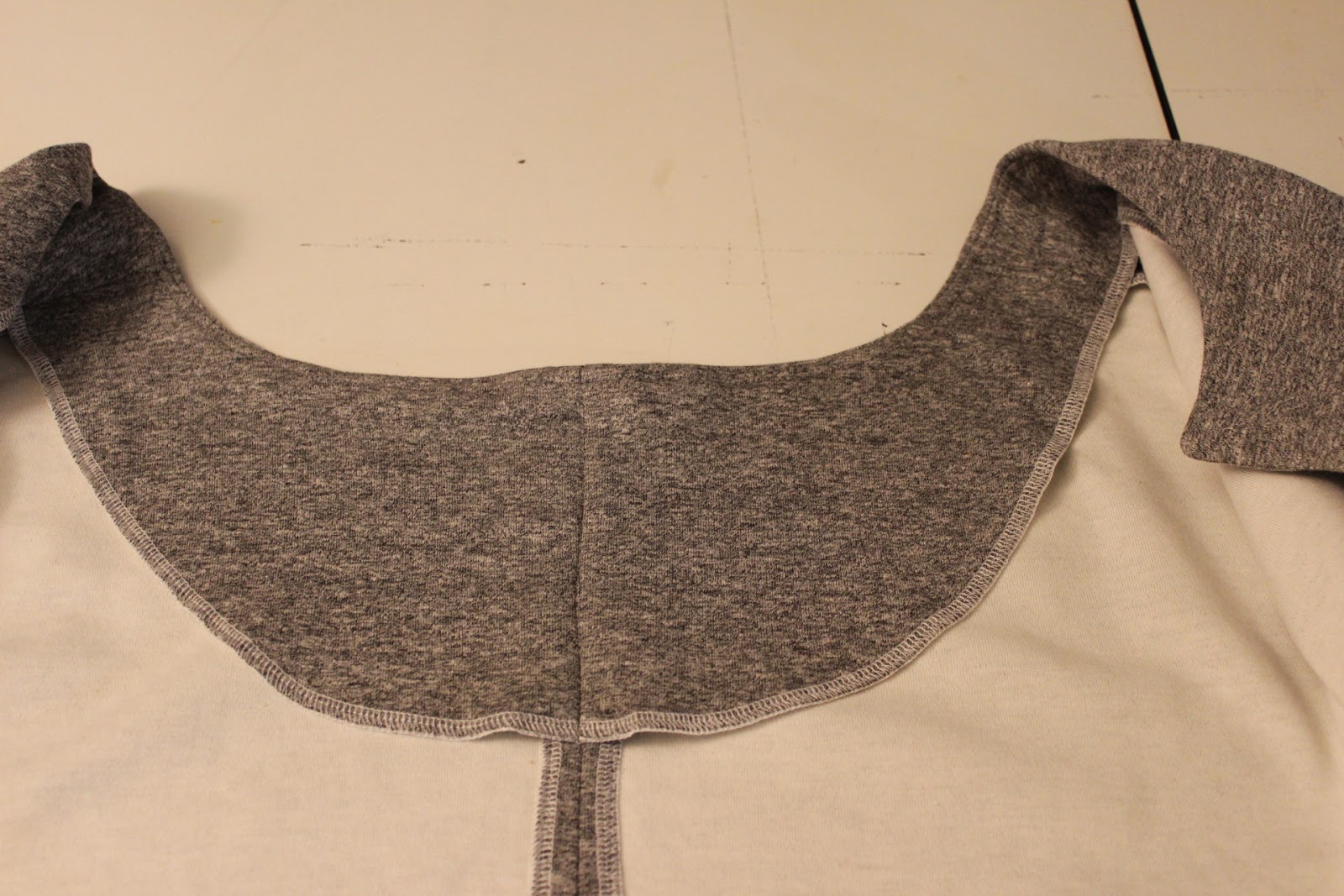 I also decided to make two design changes from the amazing jackets that Nikki made. The first was to add a closure at the neckline and the second was to add pockets which I liked until I saw the pictures of me wearing the sweater jacket.

Since the construction was relatively simple, I took no pictures of the process. But I did take a few pictures of how I made the tabs to add the silver clasp closure to the jacket front. 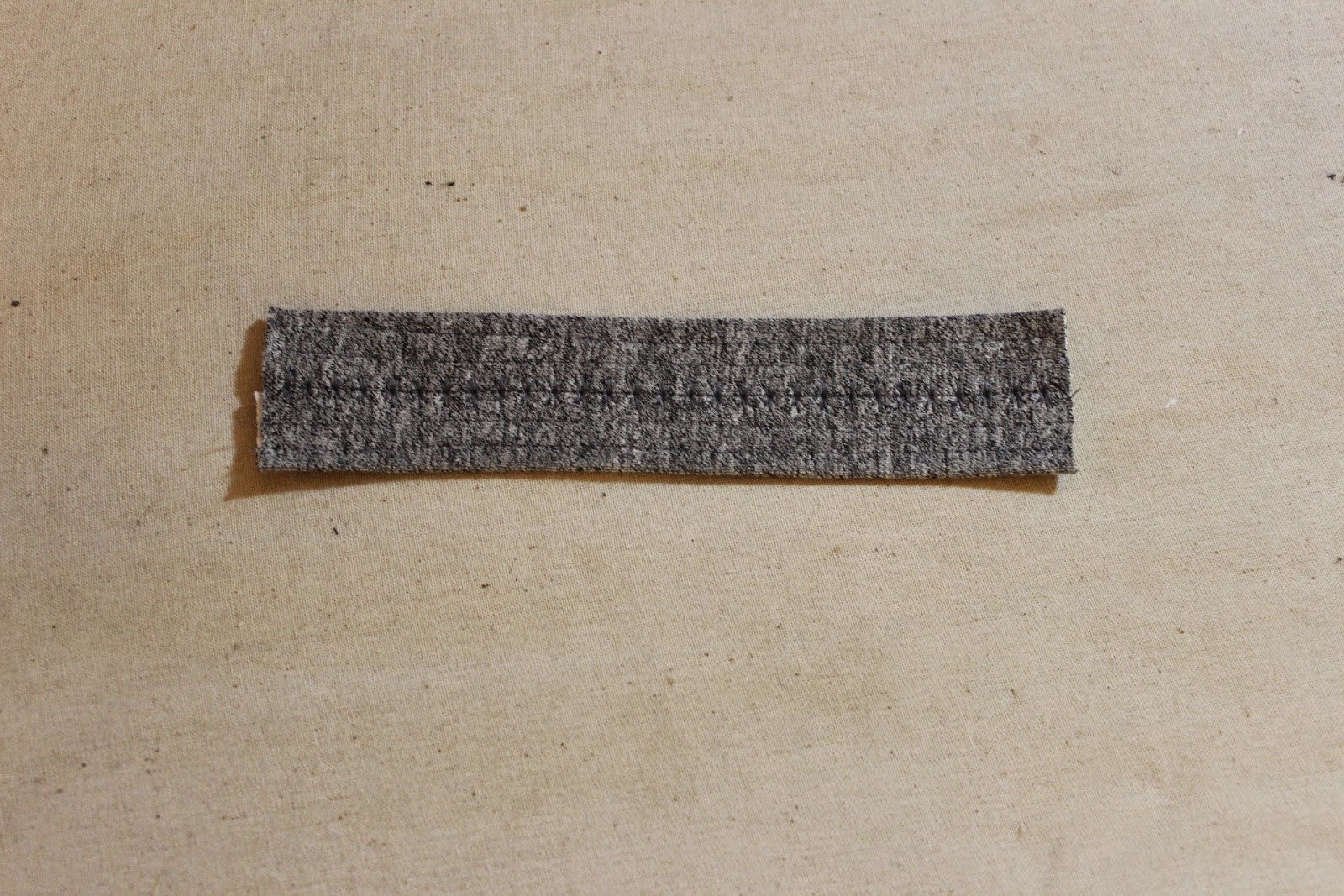 I cut a strip 14" long by 3" wide. Flipped the back over and pressed the sides to the middle. I added two rows of stitching on either side of the tab. Then I added a decorative stitch (Stitch #106 on Janome MC 8900) down the center of the tab. 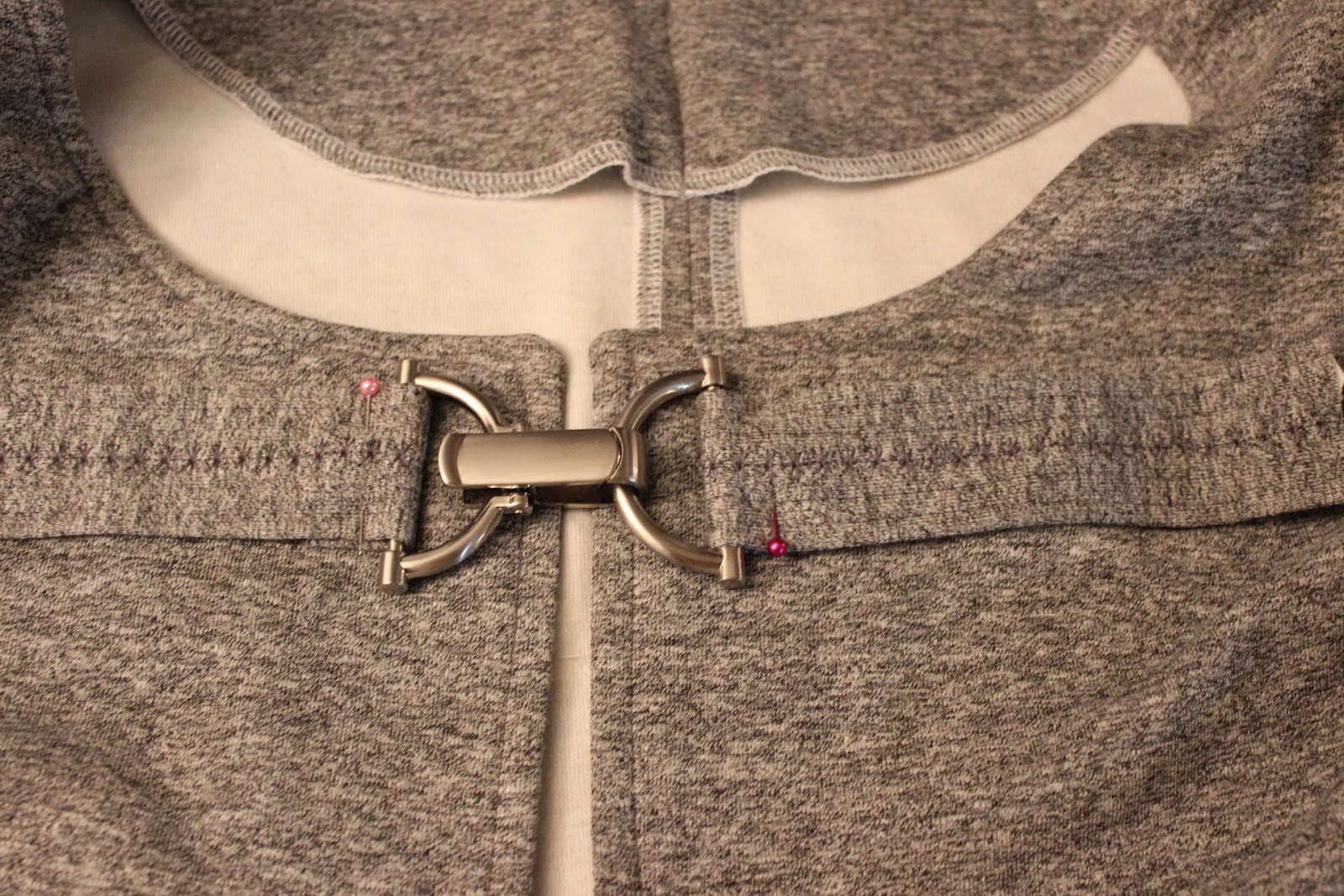 I cut the strip in half. Folded it back an inch on both strips and looped it around the bar of the closure. Pinned the tab down onto the jacket. 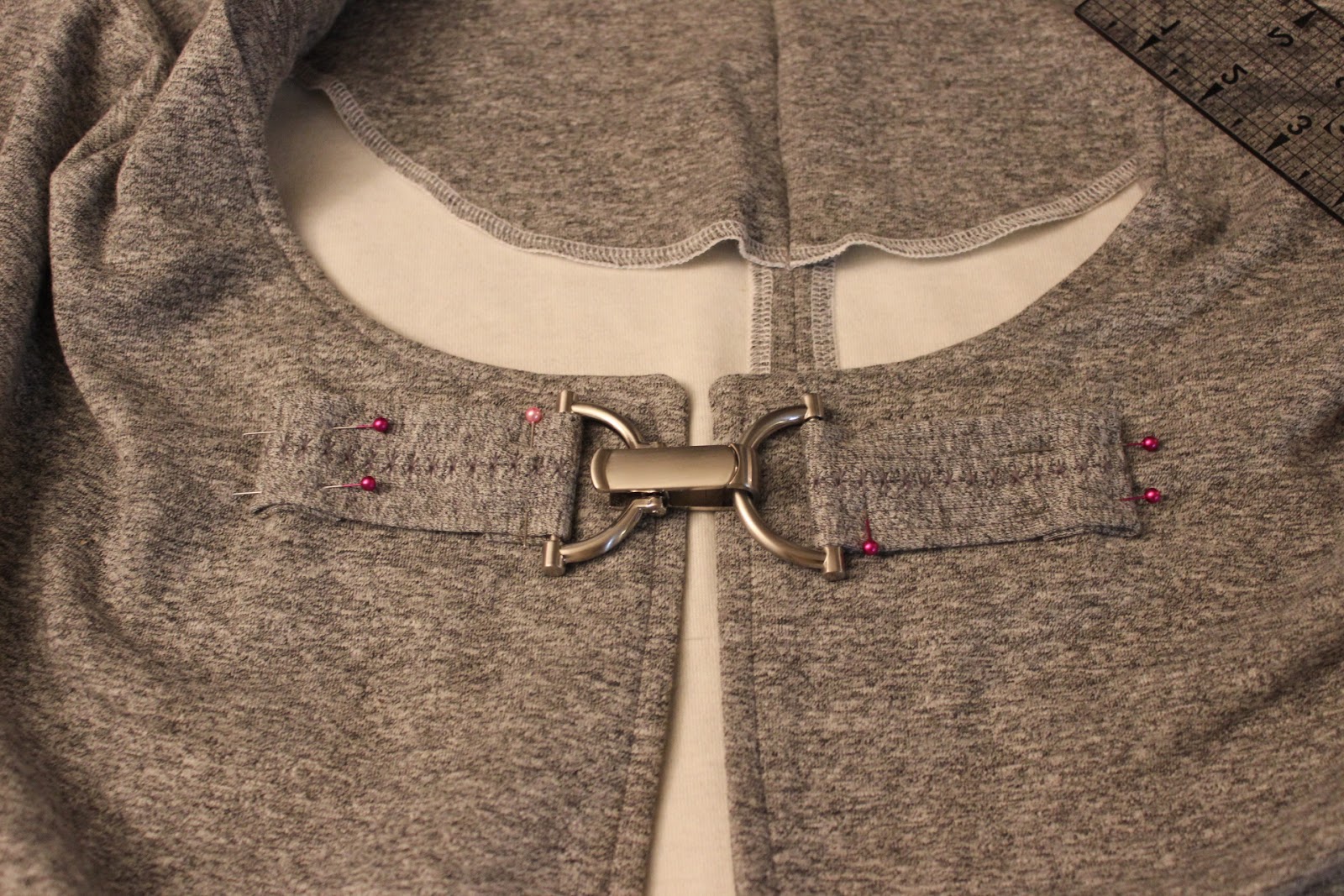 Pinned both tabs onto the jacket front. 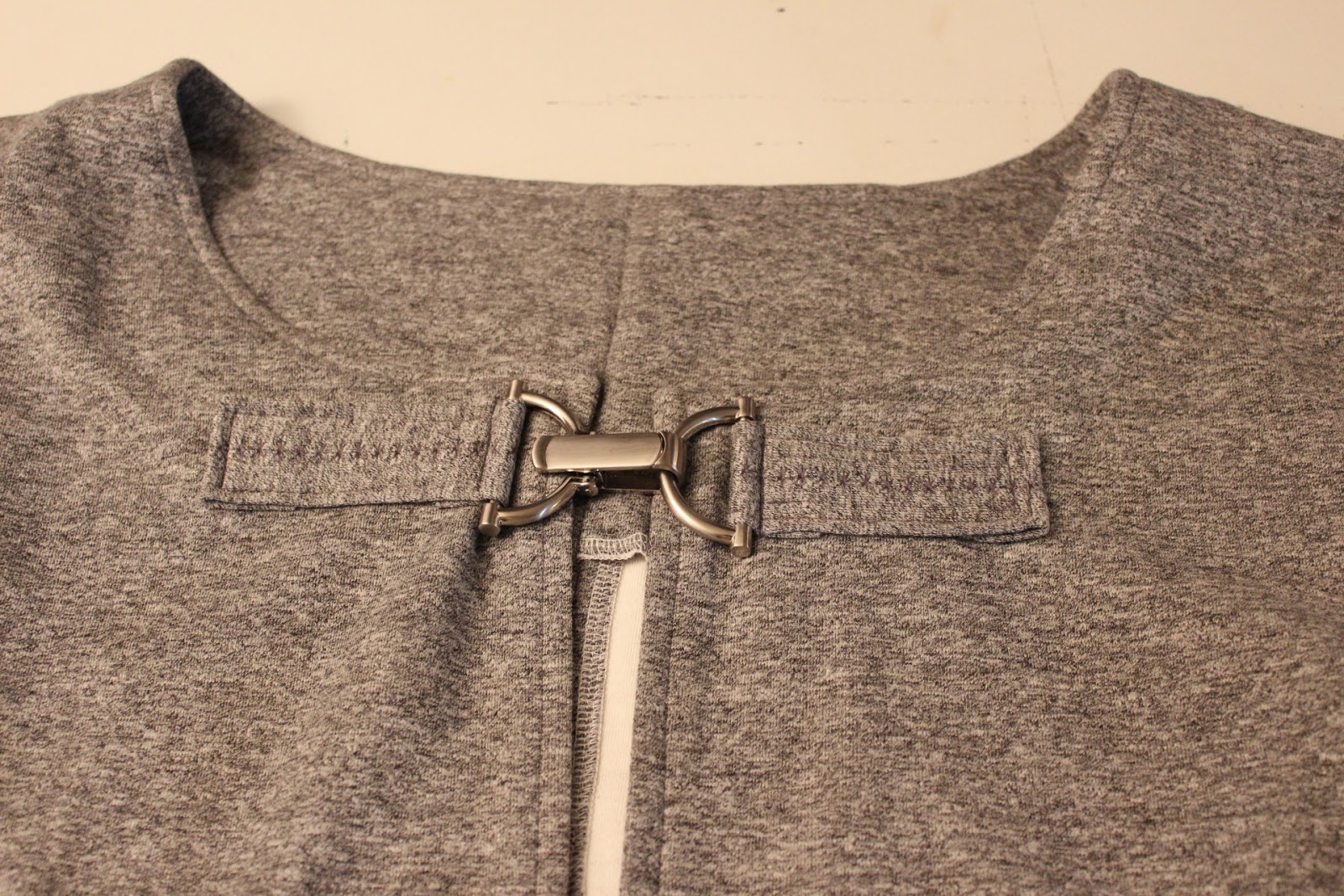 Stitched it flat using my zipper foot to get close to the bar. Also added a few hand stitches in there to insure that the tabs were secure. This is the feature I love the most about the jacket.

As I said previously, I realized that I hated the pockets on the jacket.  They are too high and poorly attached so I removed them. 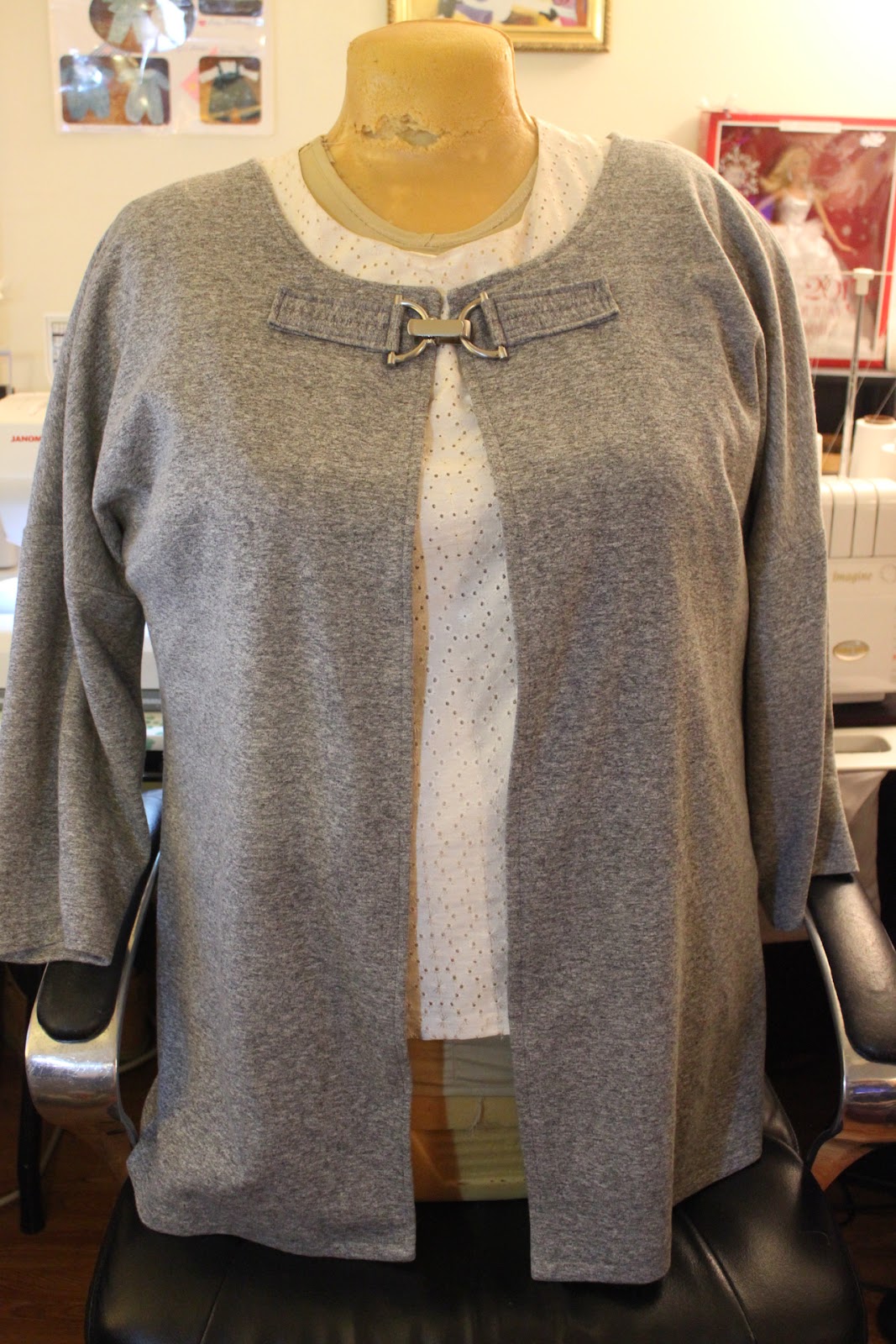 Have to settle for the revised sweater jacket on Lulu
because the sun went down! 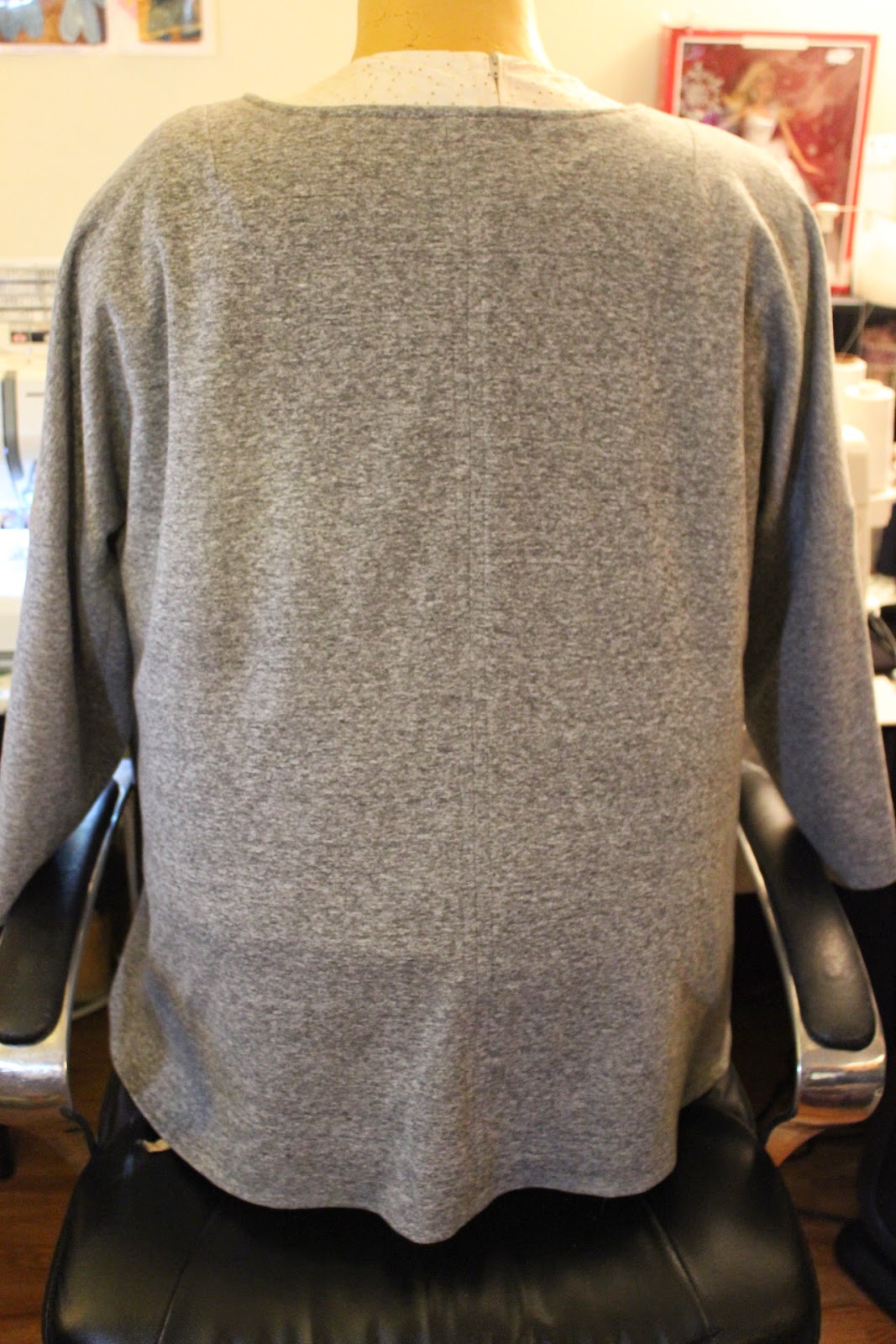 You can see the back seam with a little topstitching
added to give the back some definition.


Don't know if I'm going to add the pockets back or not...part of me liked having them on the jacket which is unusual since I'm not a pocket girl at all. So I'll see since I still have the pockets.

One more thing, this is one comfortable sweater cardigan. It's soft and warm and I'm sure it will get a lot of wear this winter. I would really like to make another one with a few adjustments. I just don't know when I'll get to it since I have so many things I want to sew this winter!