Now that I'm home and I'm thinking back on my weekend, I flew cross country to fabric shop!  That's it in a nutshell... 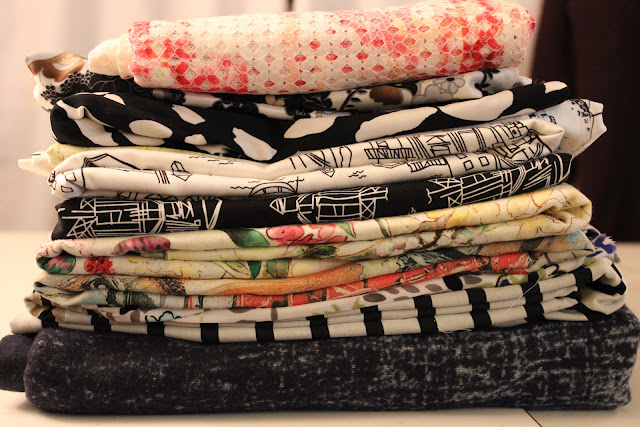 So let's start at the beginning. I've already detailed my Friday fabric shopping in Seattle.  Saturday we got up bright and early cause Pulluyap is quite a drive from Gaylen's and we had to pick up Niema too. The three of us headed off to the Sew Expo.

I had a mission. Seriously, I wanted to touch and buy fabric from Marcy Tilton's booth. We get to Pulluyap and enter through the Blue Gate and what is before my eyes?! The Marcy Tilton booth! I kid you not it was destined...

First some instructions...no drooling on your keyboard cause there is some serious fabric p*rn coming up. Two - I've linked to pieces that are still on Marcy's site but I am not responsible for you spending your mortgage money there! Three - this is a judgment free zone...cause I bought a lot of fabric. Okay let the show begin.

When we stepped into the booth this is the first piece we saw... 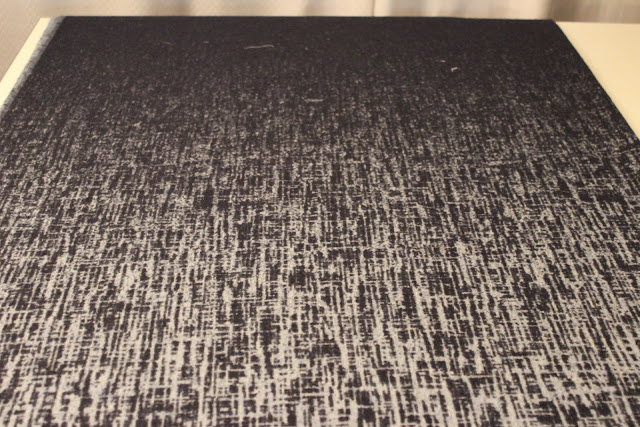 ...and I had to have it. It wasn't until we got to the cutting table that we saw the inside which I like soooooooo much better! 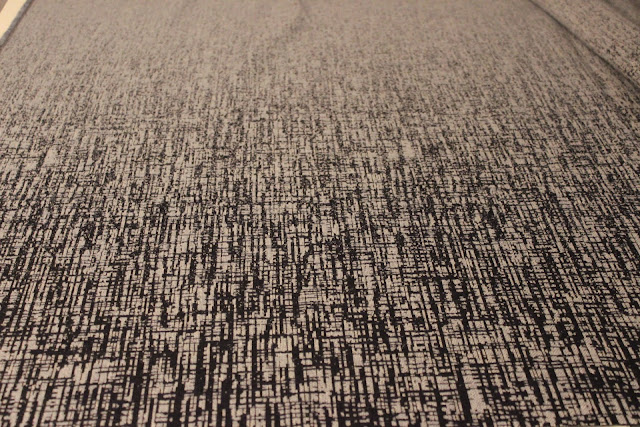 It's a panel print. I bought two panels to make a topper. See I have a plan!

Next are two linen prints and these are prints! Such a difference from the staid professional prints I use to buy. Don't forget this is where I bought the fruit salad print last year which I used to make this outfit...and there was still some in the booth this year! 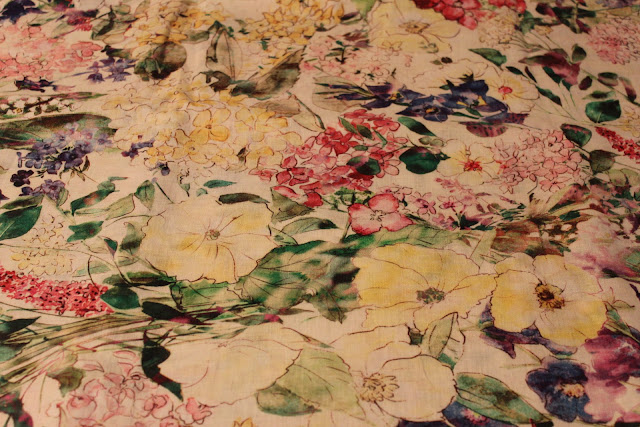 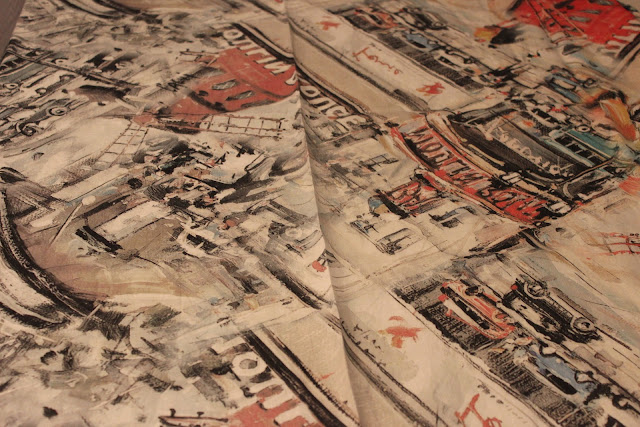 This linen print starts out black & white and ends up colorized!
Love, love, love this piece!

I will make shift dresses with these. Casual dresses that I can throw on with a pair of keds or my slip on wedge sandals to look put together but not too fancy for my day job.

Gaylen and I were digging through the bolts when Niema showed us this silk charmeuse panel print.  Be still my heart! 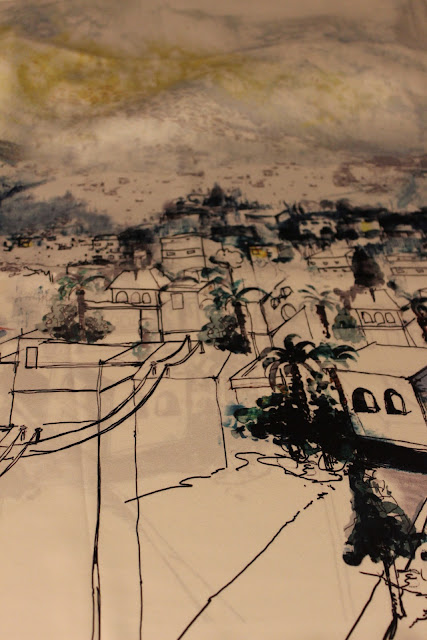 Niema bought some and is using hers to line a coat...that girl has outerwear on the brain! Me, I want to make a tunic like bow tie blouse with the print around the bottom. It should be simple but stunning!

More there is more...these two fabrics were laying side by side in the back of the booth and I had to have them... 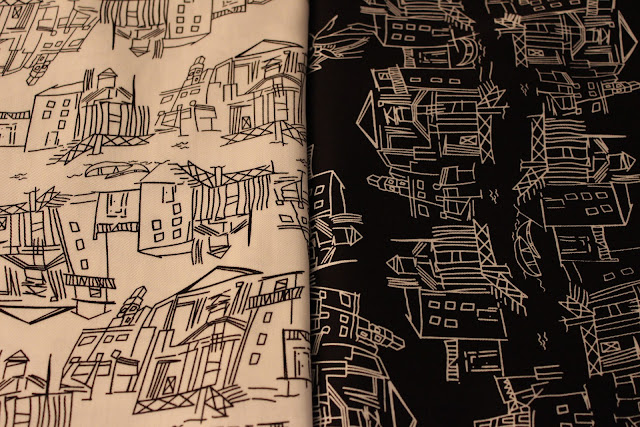 In my head I see a high low top in the white print and slim pants in the black print. I don't know if I'm bold enough to make it but wouldn't that be an awesome outfit!

A couple yards of this and the fabric pile was getting high! However, there was a woman standing near the cutting table pulling remnants out of a box under the table. She was pulling out the most interesting pieces of fabric. Now this isn't the basket that Marcy had of 3 pieces that would work together to make one of her creative tops.  No this was just a remnant basket and I stopped to riffle through it and of course I touched something I didn't want to leave behind. 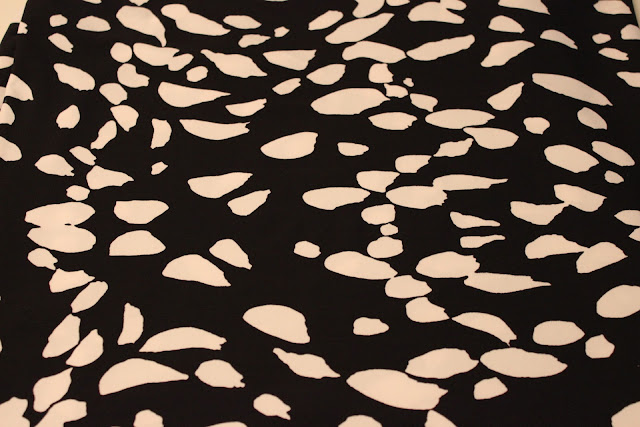 While this was a total impulse purchase, it is a simple knit that will make a great short version of McCalls 6559. You know I plan on adding a few more of these to my summer wardrobe because they wore so well last year.

I was done because I was on such a fabric high that I was bouncing off the sides of the booth but I then laid my eyes on this... 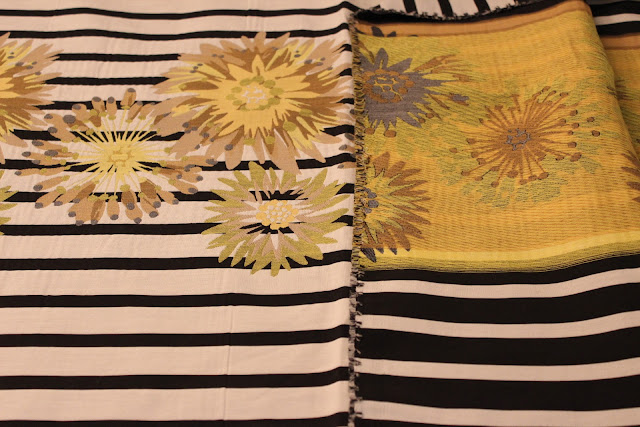 Now I'd seen it on the website prior to coming to Expo but I didn't realize it was a reversible panel...so 2 panels had to come with me too! Okay don't make piggy noises at me. I flew 2,841.6 miles on United to shop...so shop I did! *LOL* But c'mon aren't these amazing pieces of fabric?! Won't they just elevate my sewing to the next level! Cause simple shapes deserve amazing pieces of fabric...I got a million of these rationalizations for the fabric I bought! 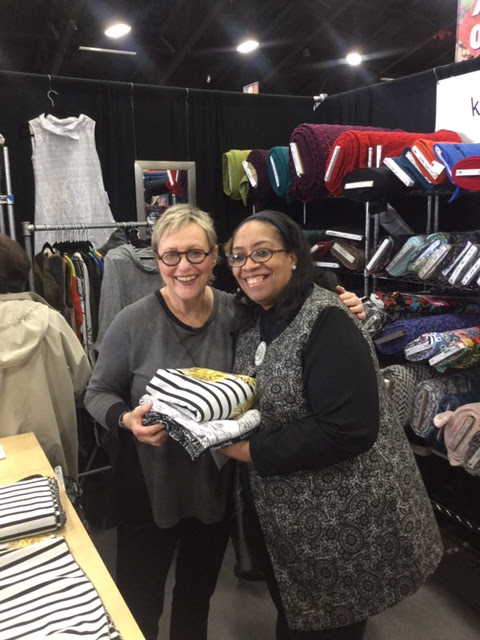 I'll be honest at this point I was ready to leave. Hey I wanted to go back to Gaylen's pet my fabric and dream of what they could be...but I'd promised a few people that I would stop by their booths and see them.

So our first stop was the Simplicity booth to say hi to Deb!  I have no idea how I have no picture with her...must be that lingering fabric hangover! hahahahaha! 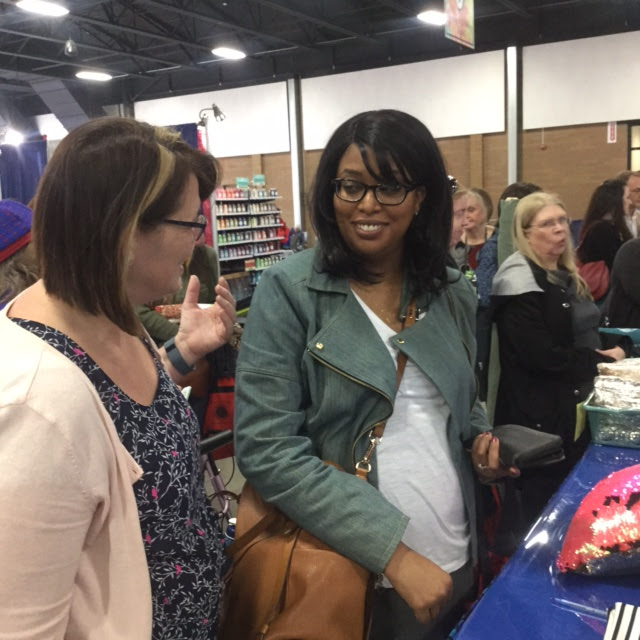 Along the way we also stopped by the Smuggler's Daughter and saw Susan the owner. 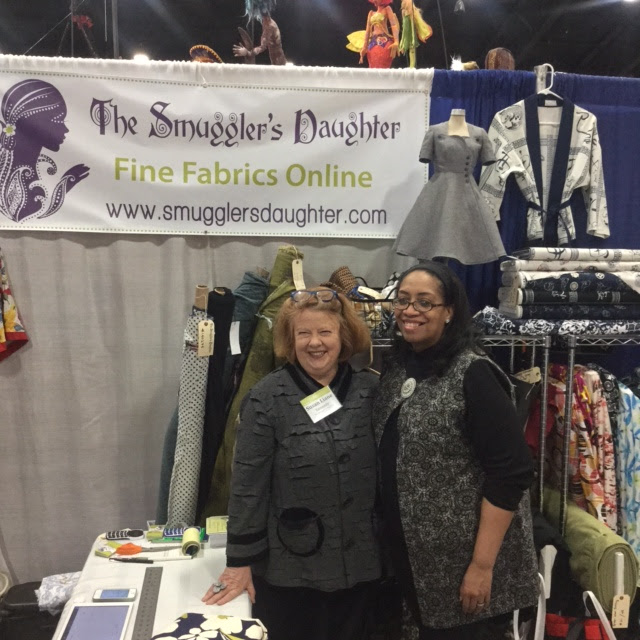 Yeah I bought a piece here too but it's all Michele's (That Black Chic) fault. She made this awesome trench coat from this fabric so I had to have some! 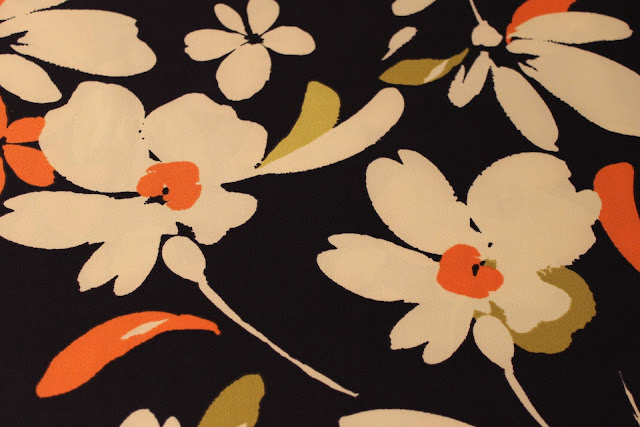 I'm making a cute summer skirt with mine since I only got two yards! I have to tell you it was awesome meeting Susan and talking to her about how she started her fabric business. Also, it was really nice to see some of her wares in person!

Tired yet? Overwhelmed? Well think about me carrying all of that Marcy fabric around! *LOL*  Niema and Gaylen wanted to see the Vogue Fashion Fabrics booth. I was game - hey it was more fabric! I have to admit that when I got there nothing was calling my name. So I was standing around the cutting table and I saw a woman cutting some of this ~ 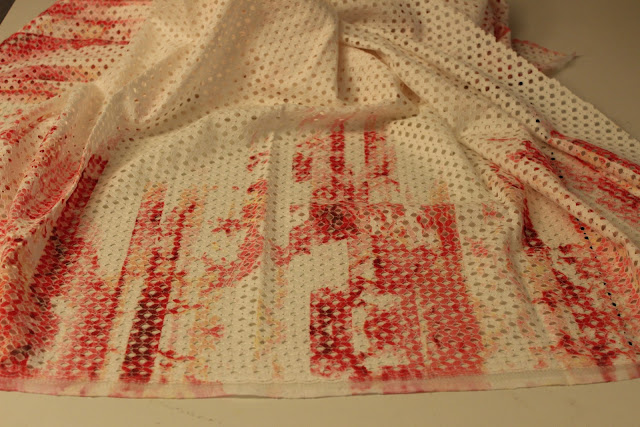 ...and I had to have a piece! But c'mon it's an amazing border print eyelet. Seriously that is fabric nirvana! I was lurking so hard to get the bolt when the woman was done that the cutter was getting nervous. *LOL* However, I ended up with the bolt - yes! Gaylen then saw it and wanted a piece so it made it's way down the line of waiting women. I don't think that bolt made it back to the racks!

I'm still lurking because Gaylen and Niema are still shopping. I mean I can't complain they waited while I spent ALL of my money at Marcy's...and I see one of the Vogue guys disappear into this curtained area.  Then he comes back lugging like four rolls of fabric. Miss Johnny on the spot asks if they are new bolts going into the rack....ummmmm no! They belonged to a waiting woman who explains to me that she'd put them on hold the day before. Wait, what you could hold fabric?!  Stop the presses...I got some issues with that UNTIL she says I don't want it all you can have some.

That's how Gaylen and I ended up with this luscious polyester print... 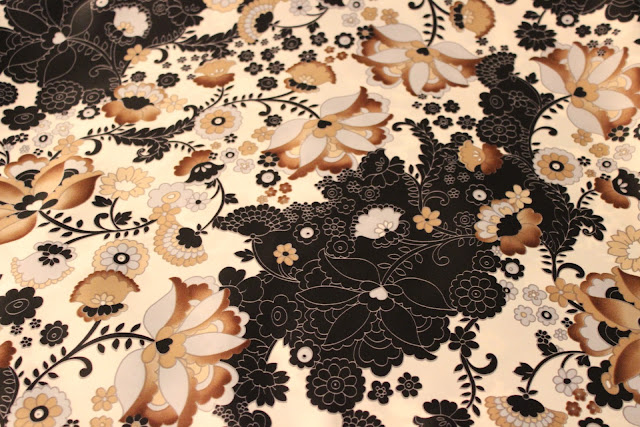 Now don't judge because this is one of those amazing polyesters that feel like a silk. It has a great hand, great colors, and a great price...so we bought it.

The final piece I bought at the Vogue booth was this cute little rayon print that called out to me "take me home and make a peasant top out of me!" So who was I to dash it's hopes and dreams...plus it will make the cutest top. 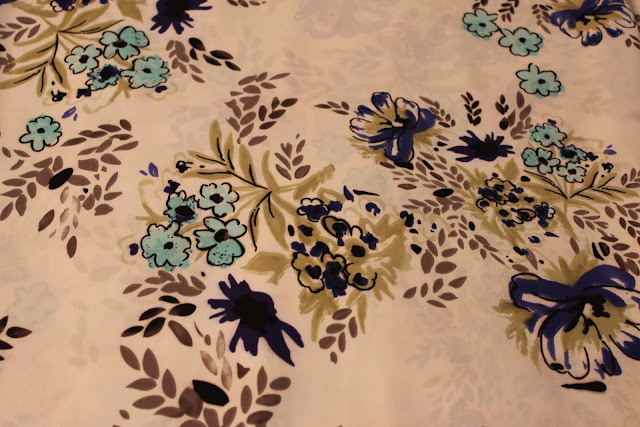 The best thing about these pieces were that all three were only $3.99 a yard. Can't beat that right?!

We had lunch with Gillian from Vogue Pattern Magazine and then we took in the fashion shows - The Tilton Sisters show which is up on Marcy's blog and Patti Palmer & Melissa Watson presented the Vogue Patterns show. Of course, I saw a few patterns made up that I'd passed over and now want. The show always does that to me!

After the show we went by the McCalls Pattern booth ~ 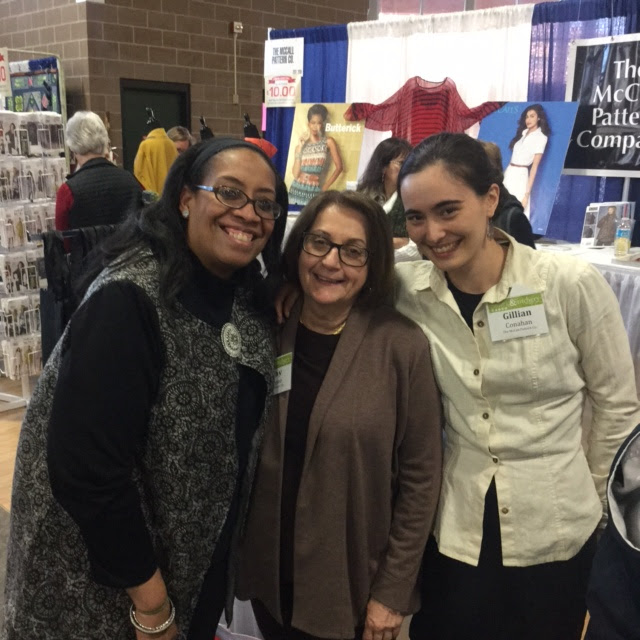 Kathy Marone, Gillian and myself 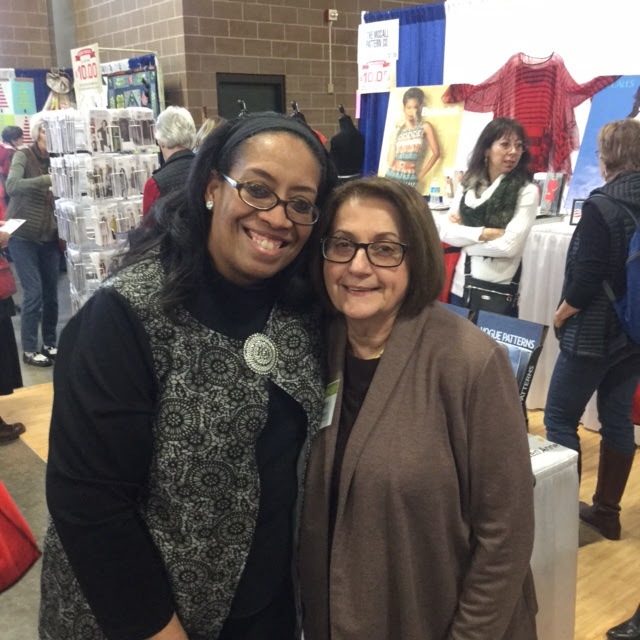 We also visited the Pendleton Wool booth but since I still have last year's pieces unsewn in the collection, I didn't purchase anything here.  I did, however, touch the new Baby Lock sewing machines - oh man they were beautiful! I avoided the Janome booth because of that!!!

One other fabric spot that we visited was Billie's where Niema and Gaylen purchased fabric.  Very pretty pieces but I really was done fabric shopping at this point. I had no imagination left for new purchases.

But I wasn't the only one fangirling! We stopped in Pamela's Patterns booth and Gaylen had a moment with Pamela. I can't blame her because she looks amazing in Pamela's Magic Pencil Skirt. 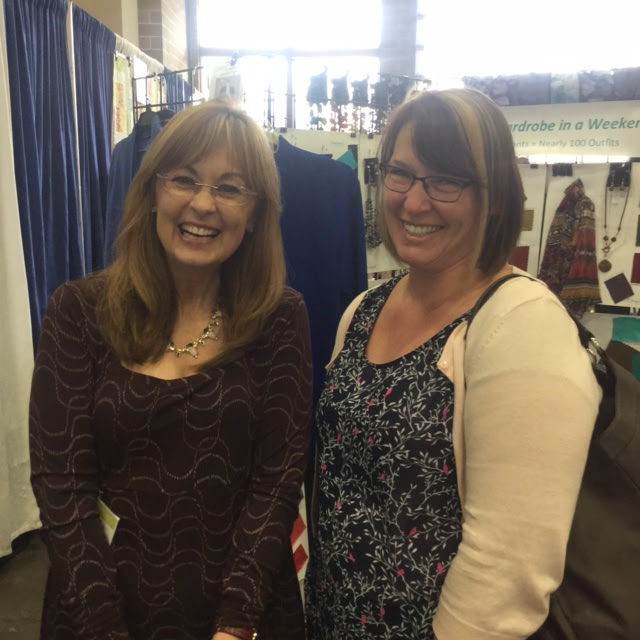 After that, it was time to leave to get ready to attend the ASG banquet where Carolyne Cafaro, Senior Vice President, Creative Director at McCalls, was the guest speaker. 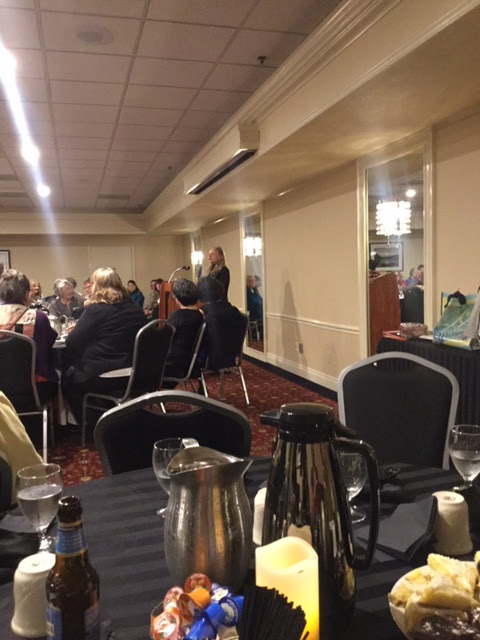 She gave a great talk about the process of designing patterns across all four brands and she answered every question that was posed to her during the question and answer portion with humor and grace.

It was a great way to end the day.  Yes, if you've made it this far you've come to the end of the fabric orgy...but I had an amazing time! It's an awesome experience to be around so many people who are compelled to cut flat folded fabric up to either make a quilt or a garment. It's wonderful to see all of the vendors in one place and to meet readers of the blog! 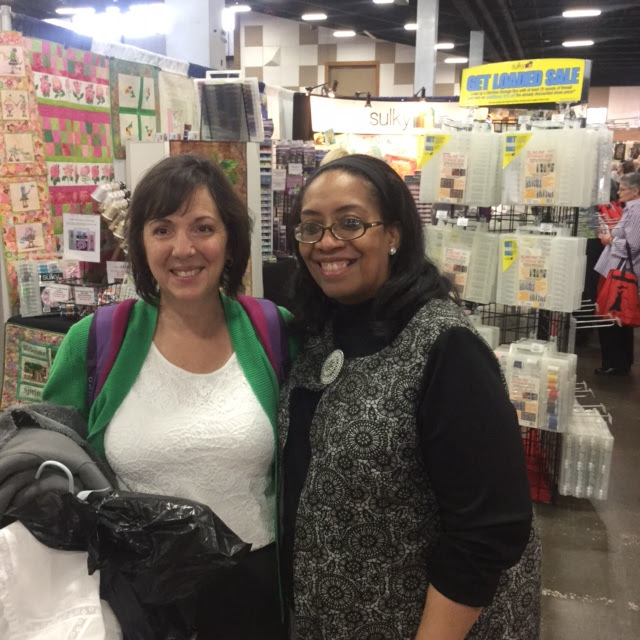 Becky was so sweet she stopped me to introduce herself!

Thank you to everyone who introduced yourself. It truly was a pleasure to meet you. But most especially thank you to Gaylen and Niema who put up with me once again...y'all know what I mean! *LOL*

I'm not sure if I will be going to Sew Expo next year...not because it isn't an amazing experience more because it's been crossed off my bucket list. Now I need to cross a few other sewing related things off of it!

There is one more post about Sew Expo. I split them in two because this is super long and post heavy as it is.