See, I've been avidly following Tee's sewing adventures on Instagram and her blog, Maggie Elaine. This month she's made some amazing pieces from Stylish Fabrics. When a 20% off discount showed up on Instagram this month, I thought let me try them out.

Now y'all know I'm an experienced internet fabric shopper. Because of that I have a few rules, one you must ship fast. I placed this order on Sunday, May 28th and it arrived yesterday...June 8th. Even with Memorial Day being a holiday on Monday the 29th, to me it should have arrived faster than it did. It's one of the things I think about when ordering from the West Coast. Maybe I'm spoiled because the other two West Coast fabric stores I order from usually get it to me within 5 days.

Sigh...so I'm a little disappointed with how long it took. Cause you know the longer it takes for something to show up, the more anticipation is built up in your mind. The greater are the chances to be let down.

I think I've proven some knowledge, some skill, some would even say a superior skill at purchasing fabric online. However, I was disappointed with what arrived and since I'm writing this so close to it's arrival I don't know if the anticipation did me in or not.

Maybe it was the fact that I ordered a bunch of basics, cause y'all know that when you order basics it's a good thing. However, when they arrive they aren't earthshattering, rock your world type of fabrics, so maybe that was it...sigh. But, one fabric is supposed to be a denim and it has a polyester 70's feel to it...ummm no! 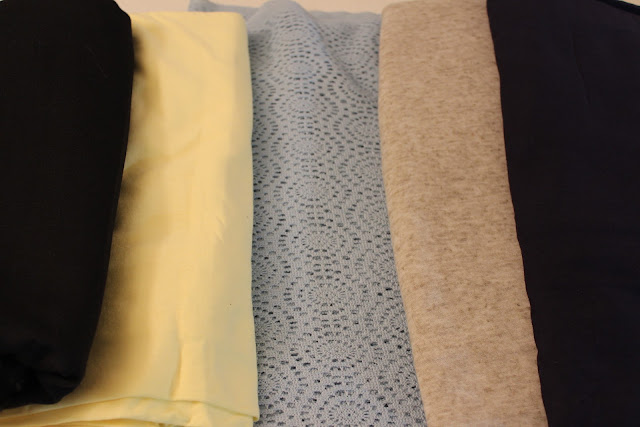 The other piece that I really wanted was a blue version of the lace Tee used to make this cardigan. It's nice but it looks more tealish IRL than the Robin's Egg Blue I was expecting. The other pieces were disappointing too.  Again I'm not sure if it's the anticipation of waiting for them or that they are as flat as they appear in person versus in photographs. Cause even looking at the photos I took of them, they look good...it's just that they don't look this way in real life. 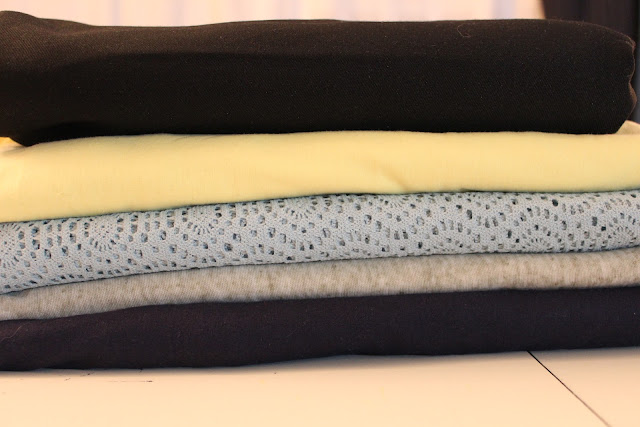 So I'm going to put them on the magic shelf in the fabric collection and let them sit. I'm sure in a couple of months when I stumble upon them again, I won't be half as disappointed as I am right now.

I hate writing this type of review but I won't be purchasing from this company again. I'm an instant gratification kinda girl and I like my fabrics to look and feel as they are described. I won't go so far as to say don't buy from them because look at the amazing garments Tee has made using their fabrics. Also, someone else may have had a better experience than I did. I could have just chosen the wrong pieces...sigh.

Anyway, the black "denim" will go in the donation pile and not on the shelf. I don't want it reproducing with some of my other fabrics and having mutant polyester babies. I will continue to admire the other garments that Tee makes and I will stay off internet fabric sites for a minute!

BTW, I have four hacked Concord Tees, two skirts and a Concord Tee Dress to share with you. Last weekend was a good sewing weekend...I just have to get everything photographed. That's what will be coming to the blog next!

...as always more later!
Posted by Carolyn (Diary of a Sewing Fanatic) at 5:30 AM