The dress is finished except for the hem because several times today I noticed that the bias center piece has grown as its hung waiting for the next step to be completed.  So I've decided to let it hang for at least 24 hours to make sure that the bias piece has grown as much as possible.  Then I think I'm going to go in and reinforce the front seams with stay tape...and finally hem it.

However, this dress has been a journey and not always a pleasant one.  Am I upset or sad that I made the journey?  No.  Did I learn a thing or two from the journey?  Yes.  One of the main things that I learned is that no matter how much you plan, no matter how many times you go through the construction steps in your head, something is ALWAYS going to come up that you didn't think about or plan for so you should be prepared for it and have the ability to move past it! *LOL*

Fabric:
4 yards of 100% linen from fabric.com
2 yards of china silk for the lining

Instead of a whole lot of words...because you know the main design on the dress front is the pleats...I'm gonna share some pics.  But first, my dress front is different from the inspiration photo.  One because I think I was just too frazzled from a day of making pleats, so my pleats ending up not chevroning in the front of the dress.  And second I added a pleat and a button at the neckline...it's my touch added after I tried the dress on...definitely making it my own. 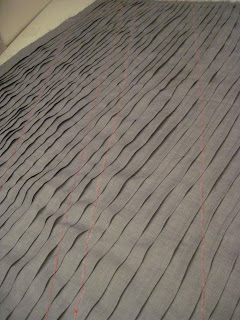 after making the pleats, I thread traced the pattern pieces
and then cut around the thread tracings for the front panels 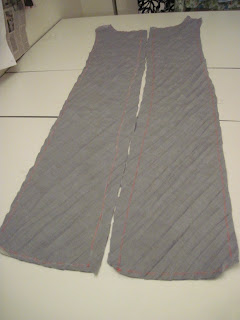 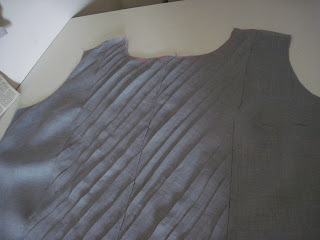 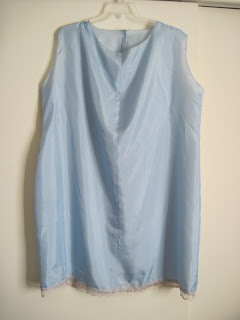 dress lining made from china silk 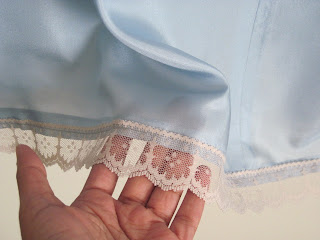 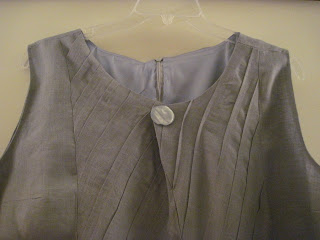 Close up of the pleat and button added to the front of the dress
I will have more construction details and a picture of me wearing the dress once the hemline has settled.  I'm not at all upset that the dress isn't wearable tomorrow.  I would rather the hem "cure" than hem it and wear it...only to have to re-hem it again.  I do feel as if I accomplished my goal of making the dress this weekend.  I don't think that I made an exact copy of the inspiration photo, though I was aiming too.  But in actuality, it is very rare when my own creative impulses don't kick in and I end up adding something to the inspiration garment to make it uniquely me.
It's Monday night and I don't feel frustrated...I feel calm and ready to face my work week because my creative side has been challenged, nourished and refreshed.
...as always, more later!
Posted by Carolyn (Diary of a Sewing Fanatic) at 12:01 AM