There has been very little sewing going on here...even though I did quite a bit of sewing last weekend.  Work was a little overwhelming since they were trying to squeeze five days worth into four...and I narrowly escaped working this weekend.


I did take advantage of several of the holiday sales and things have been trickling in this week... 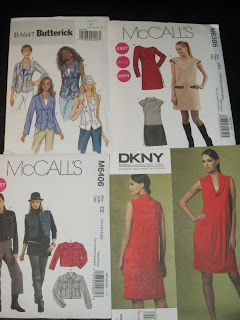 a couple of patterns
from the Club BMV Sale 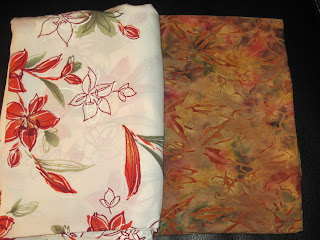 a linen print and a rayon
batik from Sawyer Brook 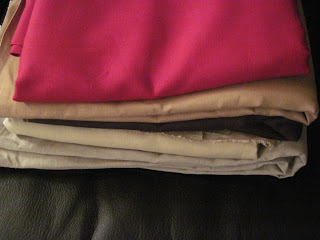 and the sale at Fabric Mart was too good to pass up so I bought a few yards of the Couture Linens - cause as you know linen is one of my favorite fabrics to sew with...


My daughter (The Little Prince's mother) took a load of knits off my hands - she wanted to make some new summer dresses and her fabric is in storage.  Just in time because once again, I'm at my max for fabric storage...*sigh*


While I was in a meeting this week I made a list of things I want to sew this month...of course, it's all dresses. The first one is cut out laying on the cutting table waiting to be worked on this weekend.  Two of the dresses will be made  from new Vogue patterns and one is from my TNT pattern.  Speaking of my TNT pattern and my propensity to sew dresses...I want to thank everyone who left such wonderful comments stating that my style wasn't boring.  It's nice to get such awesome encouragement because a few negative comments stay with you for such a long time.


I've also decided that I want to make my own version of a 6pac wardrobe (a sew-along on Stitchers Guild) during the month of August.  I need another suit for work that isn't black, gray or brown.  I just got five yards of a great honey tan that will work well as the basis for a new suit and the accompanying pieces.


Karima wrote, "I'm always amazed with what you pull out of your fabric closet."  Thanks this made me smile because I really need to be pulling more things out of the closet instead of adding to it!


Speaking of which, the black silk jersey that I used in the QVC knock-off cardigan was bought on Gigi's recommendation.  I was on some sewing board and Gigi was extolling the silk jersey she'd bought from Fashions Fabric Club and I hurried over and snatched up a yard or two in black and red.  Both have lingered in my fabric collection, moving from apt to apt with me, waiting for the right opportunity to make its entrance into the world.


Which brings me to the wearability factor...this week I wore three newly sewn garments.  The QVC knock-off cardigan - which wore very well and received quite a few compliments.  Those panel fronts were huge attention getters!  I also finally wore the Butterick 5600 dress, which while it garnered quite a few compliments - most centered around the unusual fabric - it barely passed the wearability test.  Primarily because it doesn't have enough buttons down the front.  I used several safety pins to make it through the day without hurting someone's eyes!  The black silk crepe dress was hands down the easiest thing to wear this week.  I wore it on a 90 degree day and it was perfect.  It was lightweight, comfortable and looked good all day long.


So these are my thoughts late on a Friday evening.  I'm glad it's the weekend because I plan on working on my PYT dress.

Posted by Carolyn (Diary of a Sewing Fanatic) at 10:53 PM