I'm Leaving it All in the Front!

In my opinion, the most important aspect of making this garment work is ~ perfect pattern piece layout.  Laying the pattern on the panel to get the optimum effect was my first priority. To achieve that I made entirely new pattern pieces. These pieces allowed me to use a single pattern layout. That way I could most effectively use the fabric, as well as, have the ability to see how the pattern pieces lay on the fabric. 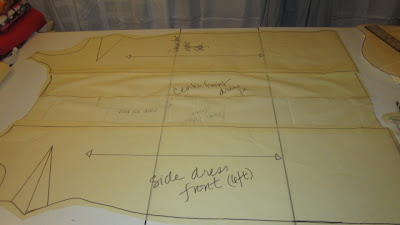 Background Information...
But before I even got to that point, I did a little research.  Gigi, who use to blog at "Gigi Sews" has a great blog post (yes, her blog is still up and accessible) on how to best use a large scale print called, "Pattern Matching Tutorial".  This is a fantastic post with great pictures that I read through a couple of times.  Gigi also did a series of posts on The Sewing Divas blog, called "Distinctive Prints" that I also referred to before working with my panel.


Why did I use these blog posts?  Because I've seen some of the garments that Gigi has made which have excellent pattern matching. I wanted to walk in the footsteps of someone with that kind of proven sewing experience and emulate it. Because to me, this dress will ONLY work if I'm very careful with the pattern placement on the dress front.  Can you tell that I was hyperventilating about this aspect of the dress' design, wondering if once again I've bitten off more than I can chew? 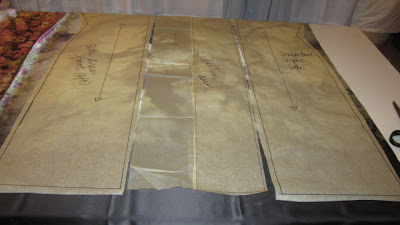 I laid the pattern pieces out several ways on the panel until I decided on the one above...which was really my first choice but I wanted to see the other options to make sure I wasn't missing something. Then I carefully pinned it all down and cut it out. Okay, honestly I laid it out, pinned it down and let it sit for a few days while I walked around it...stared at it...and let it marinate before I finally took the scissors to it!


Construction Techniques...
Since I have a limited amount of fabric for the dress front, I block fused the floral piece of the panel to insure that I wouldn't have to recut the facing piece. 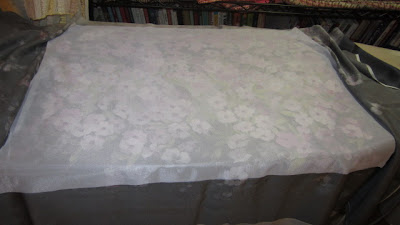 This was done to insure that the yoke piece
was not distorted by my handling of it... 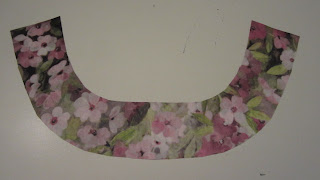 Here is the front stitched together... 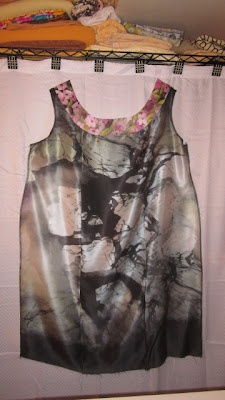 I still have to make some decisions about short sleeves vs. sleeveless and I have to work on the back...but I took a breathe, put on my big girl panties and moved forward...I mean it's only fabric, right?!


Posted by Carolyn (Diary of a Sewing Fanatic) at 5:13 PM