I've wanted to make this dress ever since it debuted. I hesitated because the plus sizes are in pdf pattern form only and you know I only do a pdf pattern for a very special garment. Honestly as much as I liked it, this pattern wasn't special enough. 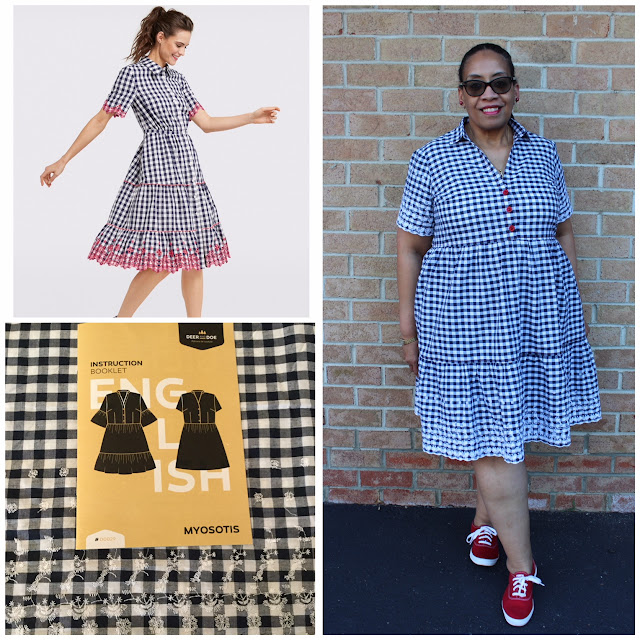 ...but I really wanted my own version. After A Gathering of Stitches made her version, I thought maybe I could make the paper pattern work. I double checked the finished measurements on the website and realized they were within range of my own. So the next time there was a good fabric sale at Fabric Mart, I bought the pattern and yes that means I bought fabric too *sigh*

Then I saw a picture of a dress in my Instagram feed from Draper James. 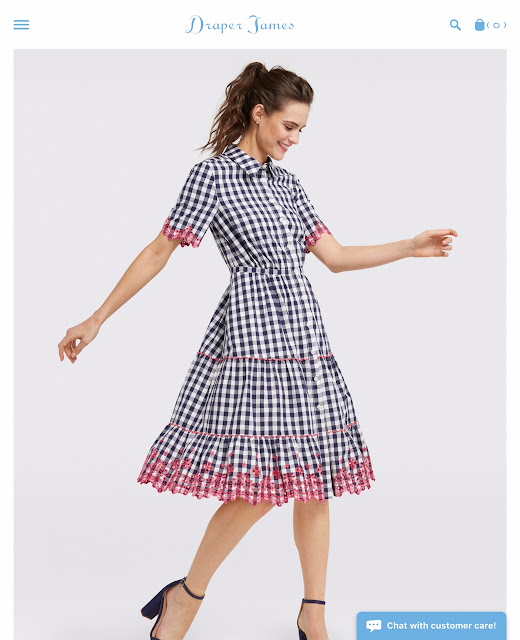 The fabric looked similar to mine and I thought I could use the Myosotis Dress to get a similar look. I know the dress has a skirt that buttons open but that was the element I could overlook for my version. This is where I started my Myosotis Dress Journey. 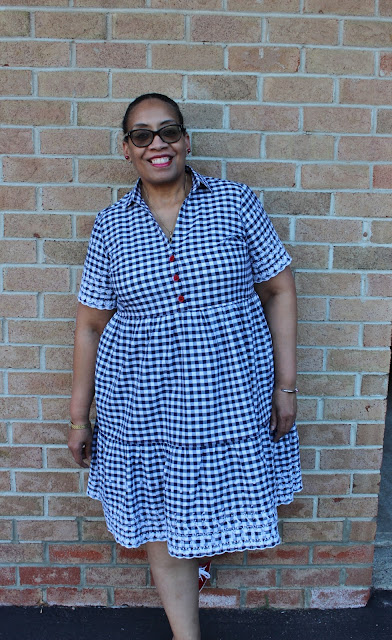 Pattern Alterations ~
I started with a size 46 and made the following alterations.

1. For the bodice:
My first alteration was to the shoulders.  I narrowed them by an inch. This is a normal pattern alteration for me.

Then I added 1/2" to each side seam gradually from the armhole down to the waist. So that the 1/2" is widest at the waistline. This was done on both the front and back bodice piece.

Finally I slit the back dart open and spread it a 1/2" - to gain just a little more space. I did not add the waist darts to my finished bodice...side darts yes.

2. Skirt pieces:
Three inches was added to the last tier of the dress to gain some extra length to the skirt.

3. Collar changes:
To make this pattern more like the inspiration garment, I needed to add a collar. Since I'm not a patternmaker, I couldn't draft a collar piece. The next best thing was to find a pattern piece that would work. So I went with my TNT Butterick shirt pattern pieces. However, they were bigger than the Deer & Doe pattern pieces. 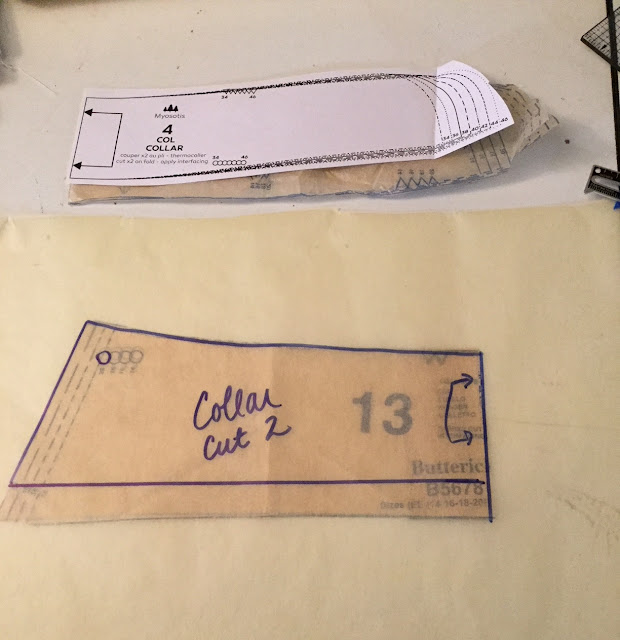 Sleeves:
I eliminated the sleeve flounce from my dress. I wanted to use the embroidered edge of the fabric like my inspiration picture. That meant the sleeve pattern had to be lengthened.  Again I turned to a sleeve pattern that I knew worked and fit my bodacious biceps. 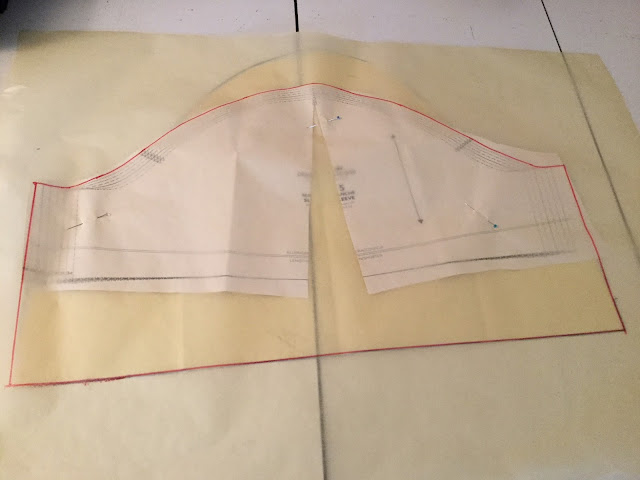 The sleeve from my TNT shirtdress pattern - Vogue 2090 - was used to alter the width and length of the sleeve. Although after I cut the pattern piece out, I folded up an inch  before cutting the fabric out. This was so the embroidered hem would not creep into my elbow crease. 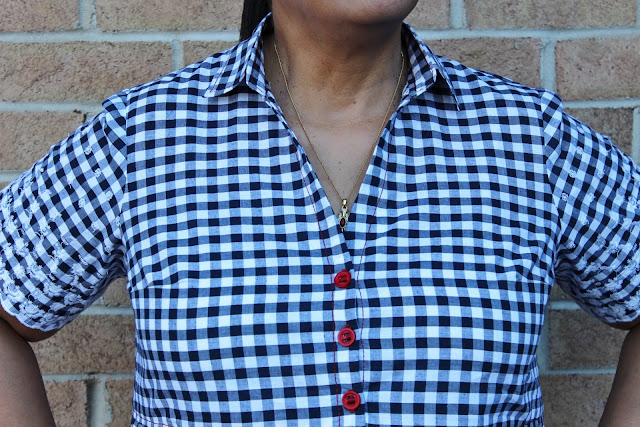 Construction Information ~
Getting the bodice to fit was my main challenge because the tiers are gathered and can be made to work. Besides the space I added to the bodice, I also used 1/2" seam allowances though the pattern tells you to use 5/8" seam allowances.

The Collar:
I added a collar based upon my inspiration picture. I was a little concerned if my shortened collar would work but it sewed into the collar band no problem using the sewing techniques that are in my Butterick shirt pattern. I think my collar insertions are so easy because I've incorporated information gleaned from other bloggers.

For constuction - I notch differently after seeing Emily's version, which of course I can't find now because I'm not sure if I saw it on her IG account or her blog. And I use Cennetta's suggestion of basting the undercollar down, pressing and then topstitching from the right side of the undercollar.

Topstitching:
I love the navy 'n white embroidered fabric but for the Draper James dress it's really the red embroidery that's eyecatching. So to bring that red to my dress I added red topstitching on everything...the collar...the front of the bodice...top of every tier. Hopefully the red pops and adds to the embroidery and gingham fabric as well as reminds you of the Inspiration Dress.

When I make this dress again, I will lower the bust darts since they are a tad high. You have to look to see this but I know it's there. Also, I made my bodice with a closer fit than some of the versions I've seen on the internet. I was concerned that if I made a looser fit that the dress would look like a muu-muu on me since there is sooooo much fabric in it already. 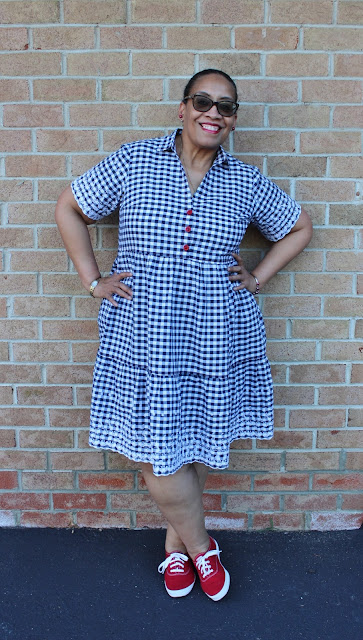 Just me hanging out by the garage doors 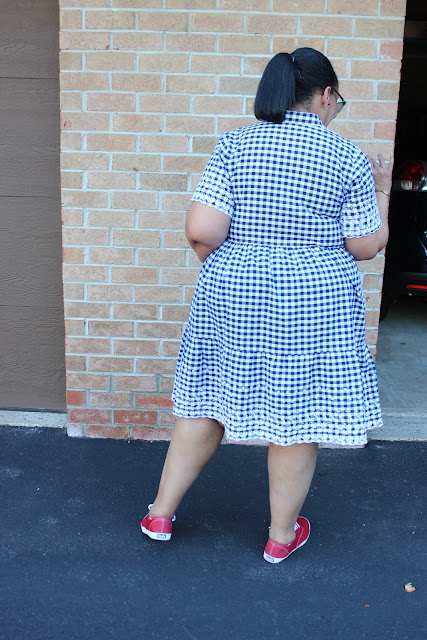 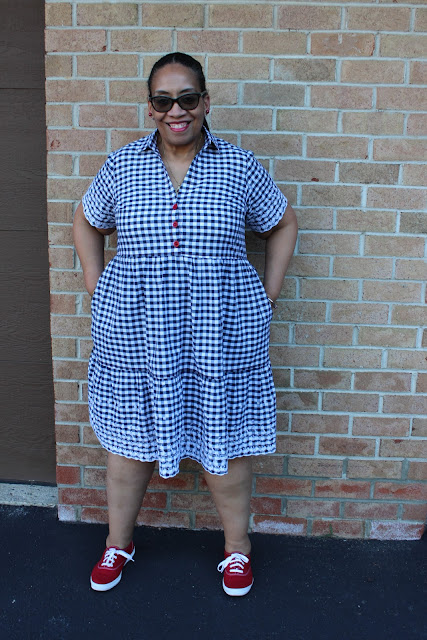 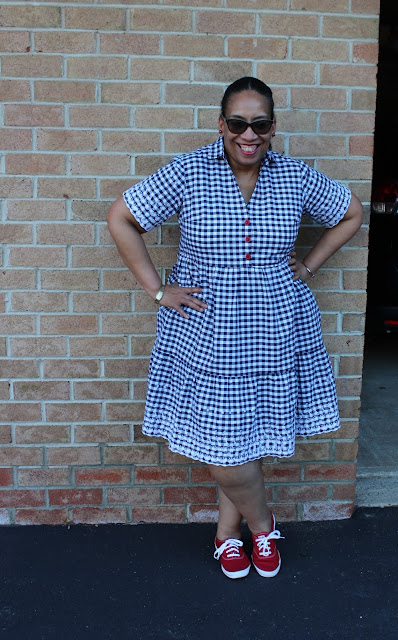 So a few things ~
One - I included the pockets and then assembled the tier wrong. I haven't removed them and sewn the seam shut in the pictures above. However, I think I will.

Two - while this is longer than pictured on the envelope and shown on the internet, I want to add at least another inch to the hemline to insure that it hits that sweet spot on me which is just below my knees.

Three - I didn't use the three tiers in the Inspiration Dress. I worked it out in my head but decided to baste the last tier on and if it was too short, then I would cut the middle tier. Since the two tiers worked and I was sick of gathering, I went with it.  I would like to try a three tier version, though.

Four - I'm trying to use my gathering foot more so I become proficient with it. The gathering on this is not as much as I thought it should be and when I used the foot, I ended up with too much gathering. I'm sure that there is an adjustment to be made but I need more practice with the foot. When I fell back on my normal gathering method, it worked just fine.

Five - while I added several rows of red topstitching to the dress, I'm not sure they are visible from far away.  But I'm glad I added them.

Wearability Factor ~
I wore this to work on Monday and got a lot of compliments on the dress...from several strangers...just people on the street...at Macys...even my Lyft driver. This dress is a winner! However, I had one challenge with the dress, when the wind blew up against the dress and raised it above my knees it made me self conscious. Although I did receive one compliment when standing at the corner waiting for the light to change and the wind blew up under the dress and created the nicest fullness.

Conclusion ~
This is an easy sew and I recommend buying the pattern if you're looking for a loose, cool and flirty dress for summer.  I made a few alterations to the pattern to get my version of the inspiration dress.  However, about halfway through I thought if you're a plus size gal, it would be just as easy to start with the Lenox Shirtdress bodice and add the tiers. You'd have to do some math to figure out the tier length and width (why I didn't go that way) but it is doable.

At first I thought I wouldn't make this dress again.  Then I tried it on and oh my goodness, the heavens opened, the choirs sang and I was a convert. This dress is EVERYTHING! I want another one in rayon and a tunic top. Just have to figure out how to make it not look maternity.

I know I can sometimes seem anti-indie BUT if you create an amazing indie pattern that I can purchase in a plus size pattern, I'm there for you. I don't mind making normal alterations, I just hate having to grade up a pattern after paying the patternmaker for said pattern. And yet again, may I state I'm not a PDF woman. There is no conversation/argument that can convince me that paying to download a pattern, printing, taping and cutting out or sending it out to be printed is cheaper than buying one of the Big4 on sale...so don't waste your breathe...I'm solidly in the paper pattern camp.

Okay after that, may I say I love this pattern and the subsequent dress and there will be more of them in my future!