I know I said I wasn't talking politics on the blog anymore but my blog so I can do what I want.  If you're content to keep your head in the sand and don't want politics, current events, or whatever on a sewing blog...run...run now...cause I'm wading into the deep.

Let's start with the facts...as a country we do have porous borders.  Also as a country, we are much harder on immigrants of color than we are on lighter hue immigrants.  Let's also agree that America has a racist history especially if you're not of European descent.  So we should not be surprised at the new low this administration has reached by taking babies, toddlers, small and older children from their parents as they seek to gain entry into this country. And now that the "error" has been realized that there are still 2047 children being held from their parents without a reconcilation date in the foreseeable future. 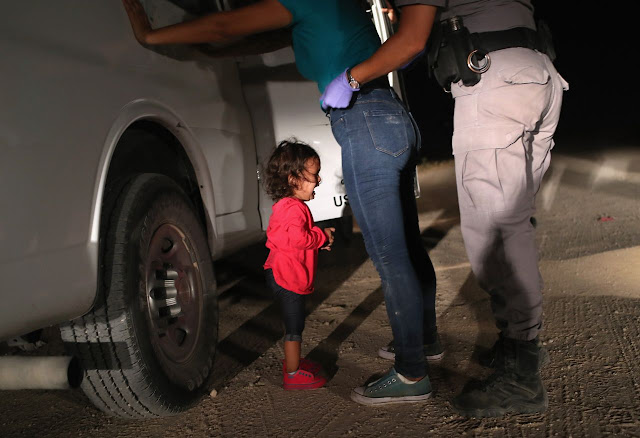 Let's also agree that unless you are of Native American descent, someone in your family either immigrated here or was brought here against their will.  Those are the facts whether your history book taught you them or not and they are not fake.  Let's also agree that in Making America Great Again, we're rushing headlong into a future where if you're not of European descent, you are an other...an undesirable...unwanted.

So....here we are standing on the precipice, testing the "ideals" of what people think/believe this country is...while pictures in the mainstream news feature images (which I've scattered throughout this post) of a situation that is in direct opposition to that image.  Now I know this situation is being featured differently on that other news channel or some of the right wing news sources.  But most of us in America are being bombarded with these images. 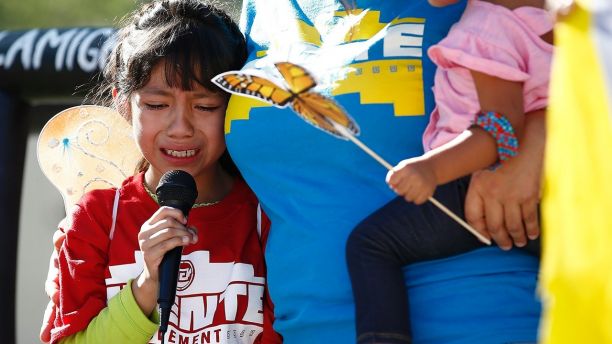 The question I pose to anyone reading this post is this, "Is this MORALLY right to take these children from their parents?  Is this the ONLY way to handle our Immigration issues?  Isn't there some other way that we can do this or should we be okay with letting the children of the world become pawns in one man's quest to build a wall?

I'm sure if you're paying attention, you've heard the talking points:

1. It's the Democrats fault - they could fix this without being obstructionists
However, may I point out that the republicans control all THREE branches of government so shouldn't they be able to pass legislation to amend this..instead of going home for a holiday break. I mean they've suspended the Senate's summer vacation, ostensibly to get some legislation passed, but I suspect more for political reasons than what's being stated. So why not hang around DC and work on this issue more!

2. They are criminals who've broken the law and their children should be taken away.
Well yes, the law of the land was broken BUT we allow criminals in our own country to make arrangements for their children before they go to prison.  Or if no arrangements can be made, they are put in foster care - a system where their own language is spoken.  They are not placed in tent camps, renovated Wal-Mart's or areas surrounded by wire fencing. 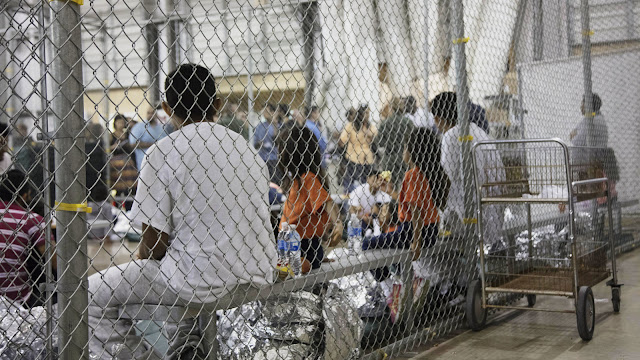 3. We need to be strict on Immigration because it's taking away jobs.
Someone made the point on that other news channel, that these immigrants are taking away minimum wage jobs from Hispanics and Blacks who need those jobs.  I just can't speak on this asinine supposition because it falls under the lesser than mentality of this administration.

4. They had a choice not to come here.
Of all the reasonings this one hurts me the most because so much for the land of the free and the home of the brave, or the words on the Statue of Liberty, "Give me your tired, your poor, Your huddled masses yearning to breathe free, The wretched refuse of your teeming shore. Send these, the homeless, tempest-tossed to me, I lift my lamp beside the golden door!" 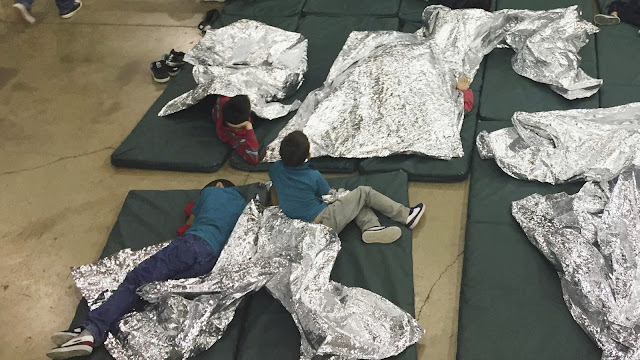 And let's not forget that Domestic Abuse or Gang Violence are no longer reasons to seek asylum in America since the attorney general has taken those reasons off the list for seeking asylum. So being a battered child, woman or elderly person no longer qualifies for asylum.  Your country over run by gangs, raping and killing the people - nope - America doesn't want you. Those humanitarian reasons have been swept from the table. Stay home and wait to die...yes that was dramatic but we have reached that point, people. 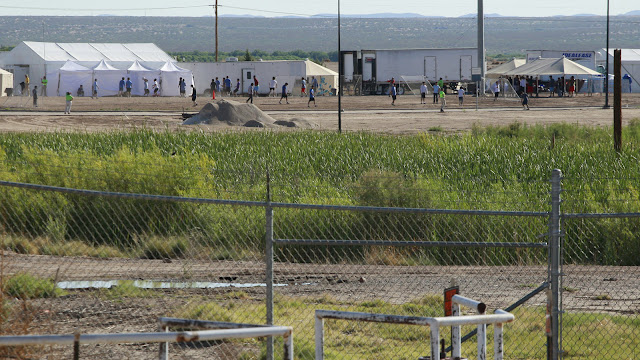 Now I'm heartbroken at the images that are everywhere...but I'm not surprised because we as a country have been walking towards this very point for the last two years.  Along the way there have been people screaming, chanting, protesting and still protesting that we're going the wrong way.  People yelling the bridge is out and that danger is ahead, but this administration keeps pushing forward. 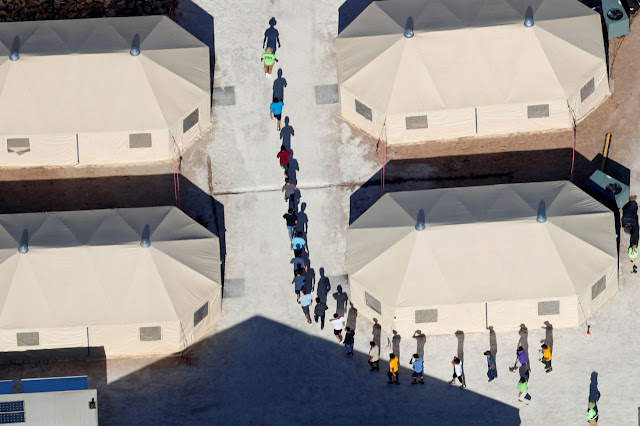 There has been violence - murdering black men and women, mass shootings, school, nightclub, and even a newspaper office shooting and during all of the carnage this administration has turned a blind eye. I'm kinda sick of the "our thoughts and prayers are with you" response...aren't you?  Protections for the average American have been revoked, the right to vote in some areas has been denied or restricted to people of color, redistricting for the gain of one or the other political party has happened, denial of aid after hurricanes and other EPA and oil related measures revoked. THIS is the legacy of this administration.

So let's not pretend that we're surprised we've reached this point. I was going to ask a question to those of you die-hard republicans and conservatives who voted for him here but after reading a recent article, I've decided not to.  Y'all obviously love him and defend him to the end so no use wasting my breathe.

However, to those who voted with their hand over their nose choosing what you deemed the lesser of two evils, I do have a few questions. Do you still believe that he's a good business man?  Do you believe that he truly stands for Christian values? Do you believe he's the best person to push your anti-abortion rhetoric? Cause I though it was "the children" you were concerned about?  Look if he's still your guy, please realize that there are consquences and repercussions for these actions.  The reckoning is coming.

If you did not vote in the last election for whatever reason, please realize your vote matters. That by not voting you co-signed all of the things that are happening in America right now.  If you did vote for one of the other candidates, or if you voted for him and now believe that this and other recent events in America is wrong, please take a minute to dial one of the numbers below and let our elected officials know that this is morally repugnant and just wrong!

...and don't forget your Senators and Representatives

I know this is long but one last point ~
America has a long history of racism.  We can start with how the indigenous Native Americans were treated and how their land was stolen from them, also how the Eskimos were driven from their land in Alaska.  Slavery and the subsequent Jim Crow laws after the Emancipation.  The treatment of the Chinese workers who built the railway systems in America.  The internment of Japanese FAMILIES during World War II.  How even Puerto Rico and the Virgin Island who are US territories and US citizens, are treated like second class citizens.

And yes, we weren't kind to the Irish who fled famine nor to the Italians who fled here after WWI or WWII...and even the Jewish people escaping extermination in Germany were persecuted.  Do you see the pattern here?  Do you see the hypocrisy of people of European descent who fled religious persecution and then proceeded to persecute others who followed after?

Yes, this is where we're at in America.  It's not pretty and there will be a cost to pay for our sins, if we don't do the right thing. I'm deliberately posting this on "Independence Day" after writing it at the start of the "zero tolerance" policy, it just felt apt to be posted today.

I have left the comment section open.  Play nice or I will remove comments or shut it down.  My living room, my rules...and now your thoughts...

New comments are not allowed.