The Best of a Decade

It hit me a couple of weeks ago that not only was a new year approaching but also a new decade. I know we as sewists look back at the end of the year to see where we've been and what we've done.  However, in the last 10 years, a lot has changed in my life and in my sewing.

So I decided to pick one best garment of each year for the last decade. It was an interesting journey through my sewing life. I'm thrilled that I documented all of those makes because most of the garments made from the first 5-6 years of this decade have been donated due to my life changing.

It also highlights when my sewing changed, when I started on my shirtmaking journey and how I finally figured out my daily outfit. This post is picture heavy with a lot of links, so grab a cup of whatever you're drinking today and read on... 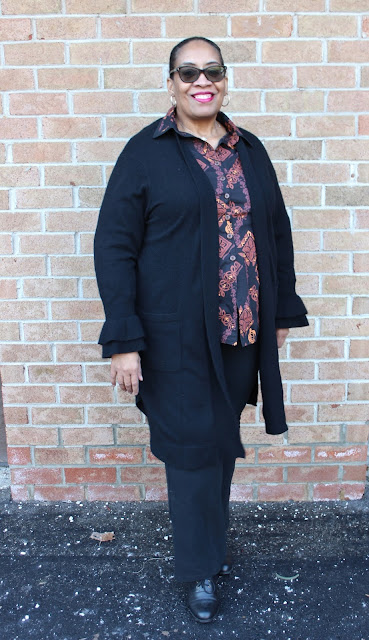 Let's start at the beginning - 2010. I was working for the private investment firm, my really corporate job, and I dressed for work everyday. There were no casual fridays, just corporate dress. I wore heels, stockings, jewelry (mostly pearls) and as I appeared in my pictures, that's what I looked like at work.

I used my end of year posts to determine what was my favorite for each year.  I did this because I was closer to those makes in those years. For several of the years I had a tie so both garments are featured. Also for the first five years, it was ALL about the dress!

Finally, I hope you will take time to read the blog posts associated with the garments. There's a lot of helpful information in those posts and while some of the patterns are now out-of-print, I'm sure they can be found on eBay, etsy or one of the other vintage online pattern sites, if they're not already in your own pattern stash.

2010:
I had started knocking off designer and RTW dresses at this point. I was working in an upscale place and most of my female coworkers wore a lot of designer gear. So I sewed designer and RTW knock-offs. My favorite dress for 2010 is The Macy's Dress. 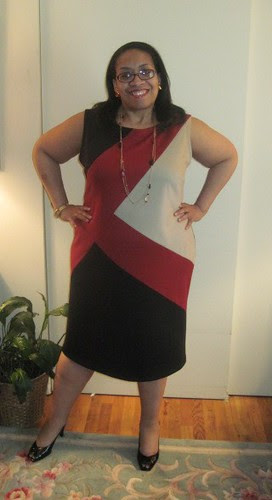 Ponte fabric was a favorite fabric of mine that year and while I could have purchased this dress in Macy's, I loved the challenge of making my own version.

2011:
Seriously that year was all about creating my version of Designer Inspired Dresses. I made 27 dresses and I also used quite a few border prints. Border prints have always been in my fabric collection! 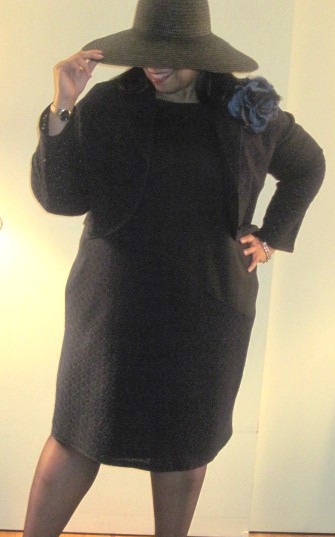 This is a grainy picture taken on my old point & shoot

2012:
I was on a roll with the Designer Inspired Dresses and made 25 dresses that year from inspiration and new patterns. Both of the dresses that I loved this year were made from my TNT dress pattern. It was the base that I used to take flights of fancy.  So the two dresses are ~ 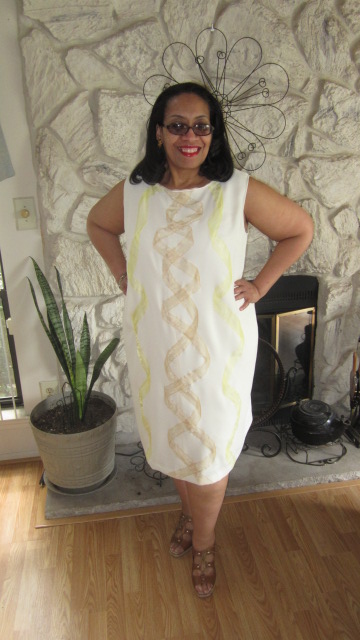 ...and the Trendy Lace Dress 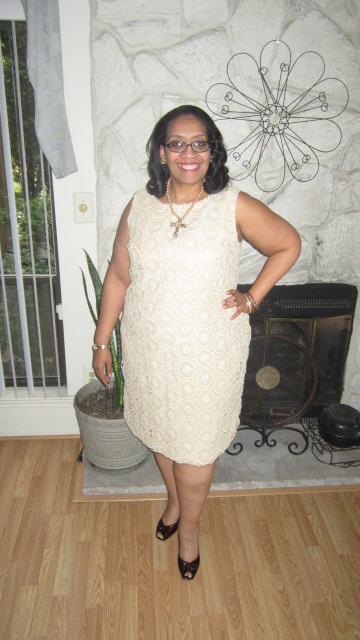 2013:
When I scrolled my makes for 2013, I was struck by how creative and productive I was during that time. Right out the gate in January, I started sewing bangers! Fantastic and wonderful dresses from all types of fabrics, using TNT and new patterns. So I ended up with a three way tie.  It was also the year that I made my niece's prom dress! Tell me if I'm wrong or if you like one more than the other because I just couldn't decide! 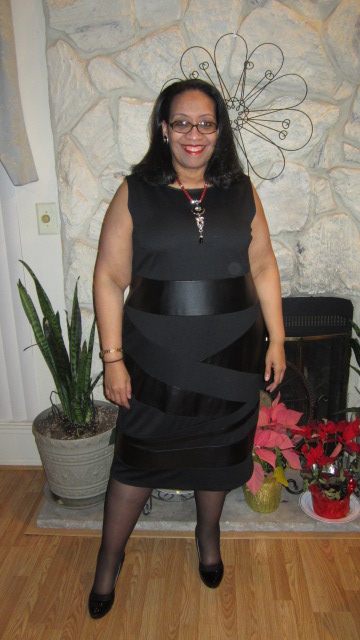 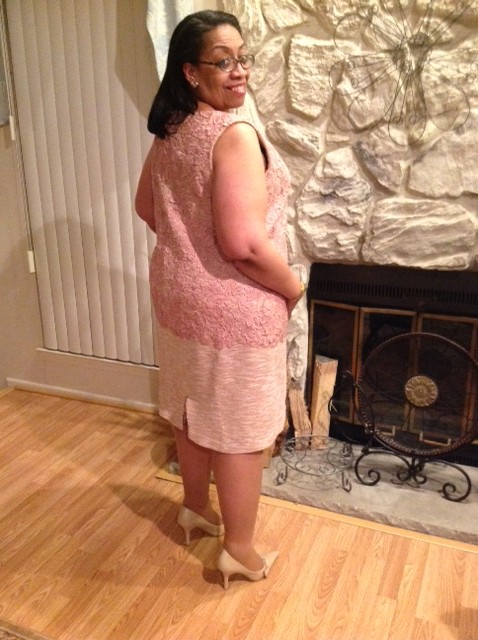 2014:
My choice for 2014 has two of my sewing loves in the dress - linen and piping. It's also a dress made from a current at the time pattern and not my TNT pattern. I didn't know it at the time but it was my last summer of sewing corporate work clothing and I'm thrilled I got to make this dress. 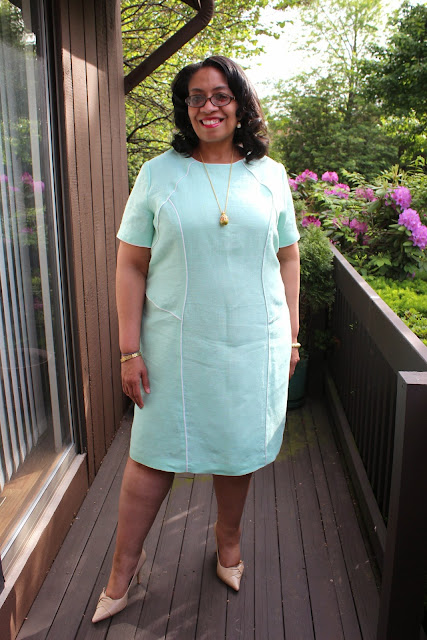 2015:
I was fired from the corporate job in early February of 2015. I sat home for about four months before I went back to work. Where I took a job that was TOTALLY different from the one I'd worked for the previous 9 years. I also lost 40 lbs from a new medication the Dr. put me on and the stress of being out of work. So new job, new wardrobe conditions, a little smaller body it was a year where I had to redefine my sewing.

Again, I used a new pattern - McCalls 6559. I used this pattern ALOT that year! It was the thrill of being able to wear a maxidress and the freedom to wear any print, pattern or color I wanted. 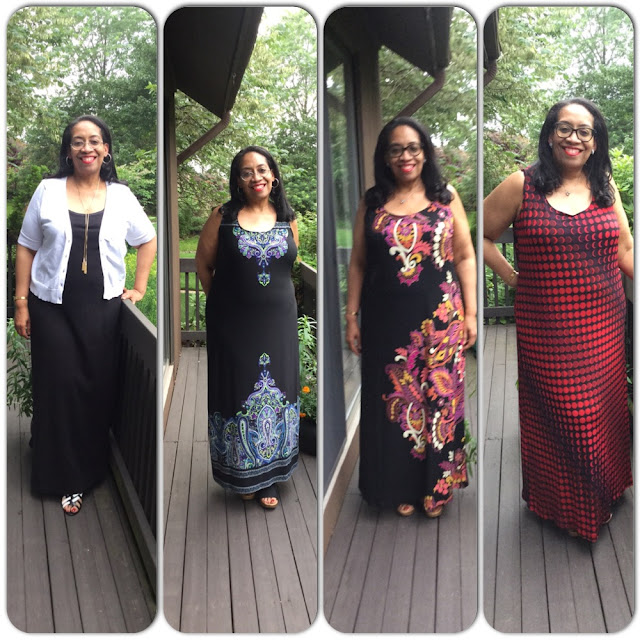 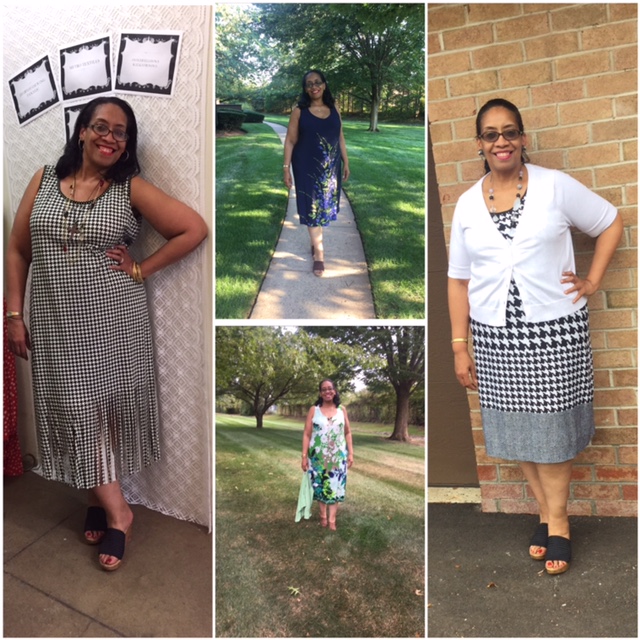 2016:
This was another year of figuring out what I wanted to look like every day. Spring/Summer and Early Fall were easy - more maxidresses. So the pick for 2016 is another maxidress pattern - McCalls 7385.  Interesting thing about this dress is that it's made from Joann's fabric...gift card purchase! LOL!  My non-sewing friends thought it was a great gift...didn't want to disappoint them. 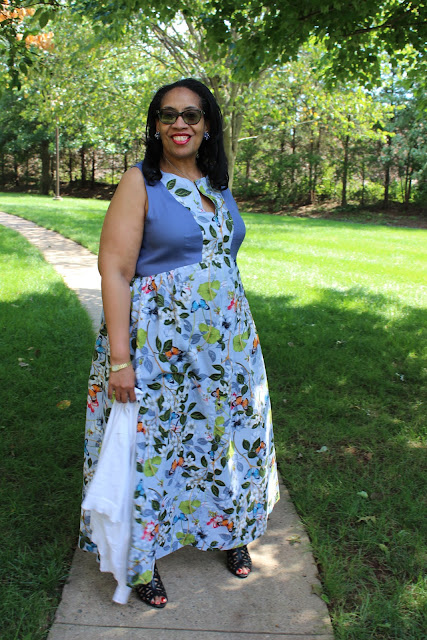 2017:
In 2017 I finally started to figure out what I wanted to wear. It was the year I started my shirtmaking journey. I was also using and buying a lot of denim. Buying a lot because I only had a few pieces in the collection due to my corporate lifestyle. I sewed through those pieces really quickly and the freedom I felt drove me to sew more garments in denim.

Simplicity 8303 - the denim trenchcoat was my garment of the year... 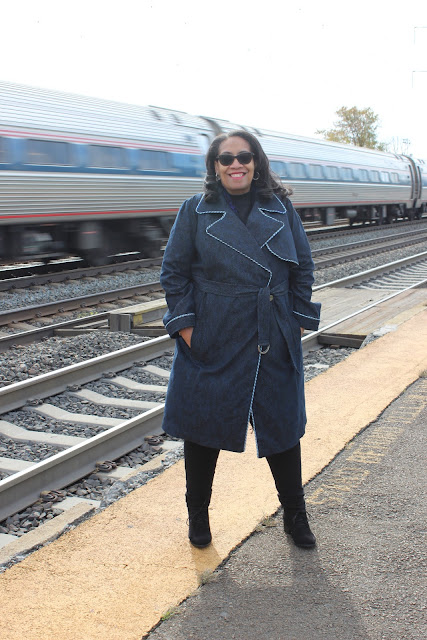 ...and the runner-up outfit was a Cashmerette Rivermont top. 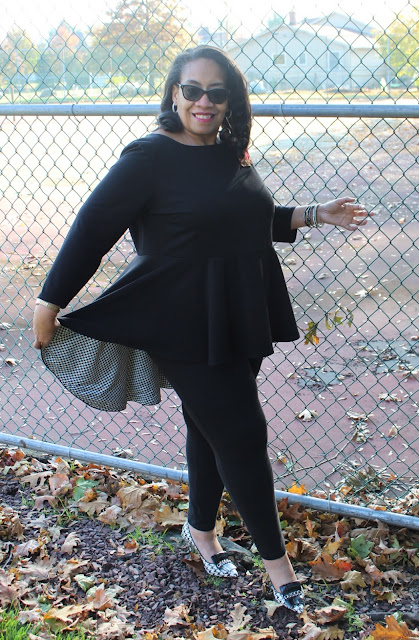 2018:
Shirts were the stars of 2018. I love the process of shirtmaking. I love the creativity and freedom. I'm now using a TNT pattern that's been altered from two out of print patterns - Butterick 5678 and Vogue 7700. 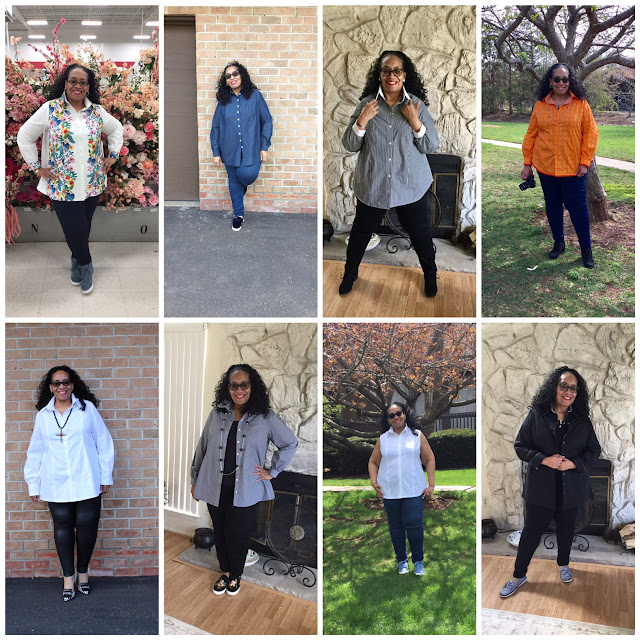 Also there were Myosotis...lots of Myosotis dresses! 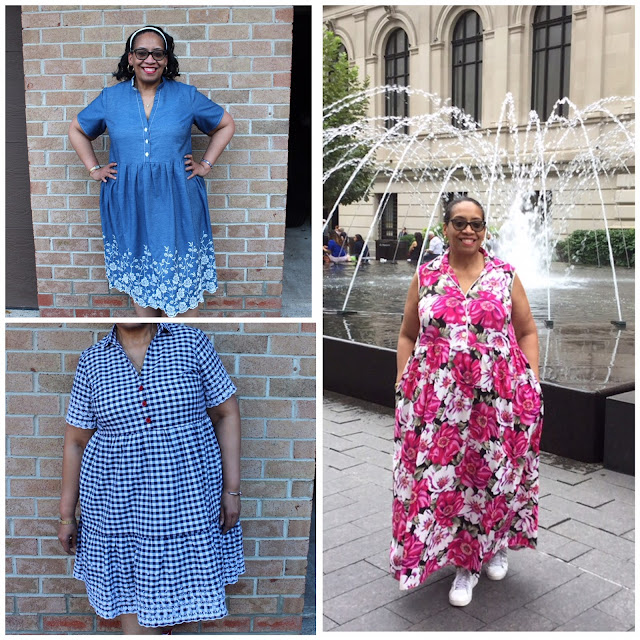 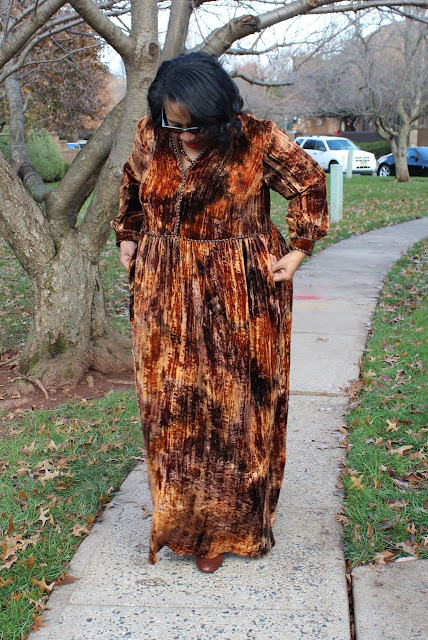 Now we get to the last year of the decade - 2019. My best dresses of 2019 would be the formal ball gowns I made for my granddaughters to wear to my niece's debutante ball. The dresses were made from McCalls 7858 and were a journey of love. The girls loved them and I was thrilled with their reaction. 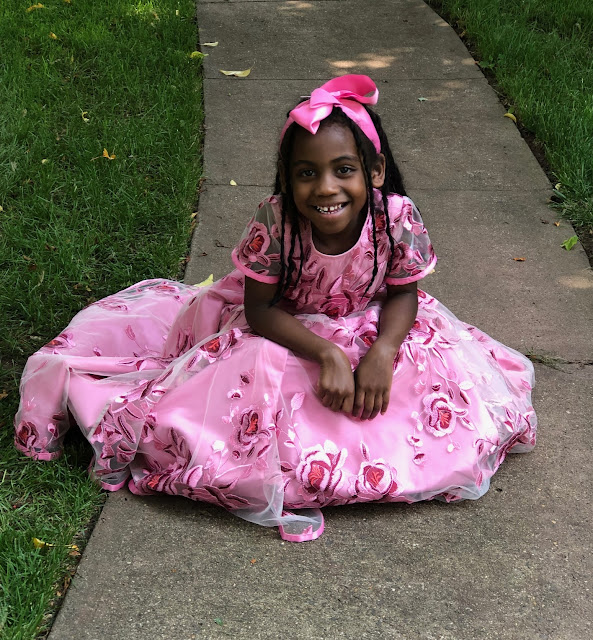 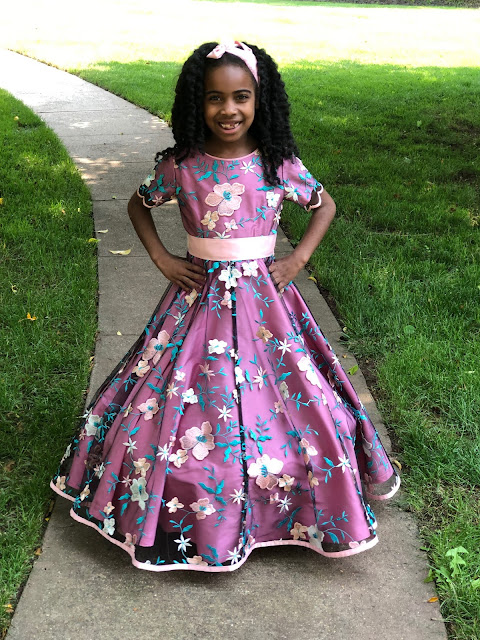 Conclusion ~
If you made it this far, thank you for taking this walk down memory lane with me! Honestly I can't believe the amount of sewing I've done in the last decade...some years as many as 75 pieces. So much has changed in this decade yet my love of sewing has remained as strong as ever!

My journey now includes so many more Indie Patterns as well as the Big4. I still sew with my TNT patterns because I love to be able to take creative journeys with them. I'm embellishing more.  Adding piping, binding and using a lot of border prints in the garments I make.

I will be 61 this year and honestly I don't know if I will still be blogging by 2030. I'm starting to reach that part of my story where there are more years behind me than there are before me. I don't know what the next decade holds for me but as long as I can sew and share, I will blog.

I am sewing during my Christmas break so I will have new makes to share in 2020. Thank you to all who have followed me all these years, especially thank you to those who left comments on my posts. As I reviewed them for this post, the early 2010s had way more comments by followers. Also, thank you to those who continue to follow me because of the sewing even if you don't like my politics...I'm especially grateful to you.

Finally, if you've been following for awhile and are willing to leave a comment - please leave one letting me know when you starting following me. I appreciate you all so much!  Happy New Year!