Continuing in my quest to own more shirts, I bought this fabric last November.  I saw it in an email ad from Fashions Fabrics Club and I loved the "Florentine Romantic" air of it.  Now before y'all start, I don't know if that's what it really is.  It's just what I'm calling it, okay?!

I used my full back version of my TNT shirt so I didn't have to cut the pattern up too much. As it is, it took some consideration to get the fronts cut in a way I liked. I did end up mirroring the print on the sides. When I laid it out, it looked like the angels formed a bib on the front and I really liked that!

The construction went together like normal. I chose not to use the burrito method for this shirt and to topstitch the shoulder seams down to the back yoke instead. Boy am I glad I went this way! Because after sewing the shoulder and side seams together I got this... 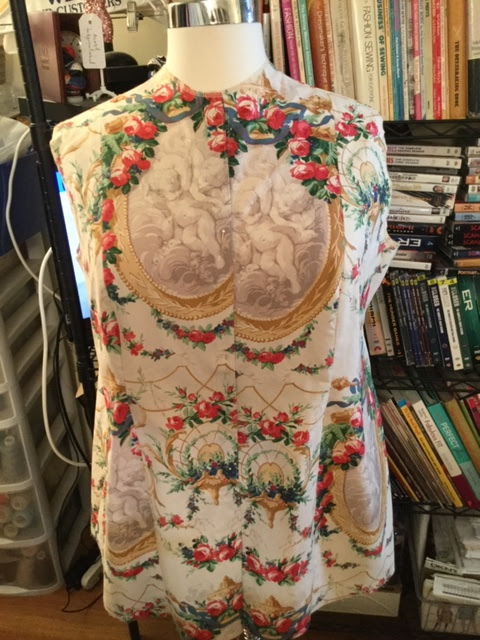 Can you say pissed off! I posted it to Instagram and got a bunch of suggestions. There were two that really resonated with me.

2. Recut the front pieces so they'd match
Since this was cut tunic length I could lose some length at the bottom without affecting the length of the shirt too much. I went with option number two.

To make it work I did the following ~

o Recut the piece that annoyed me after matching it to the opposite front to insure the motifs worked at the center front. 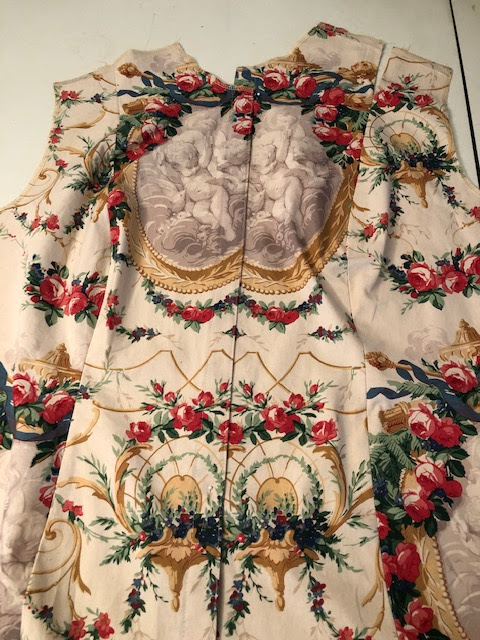 Making it match up 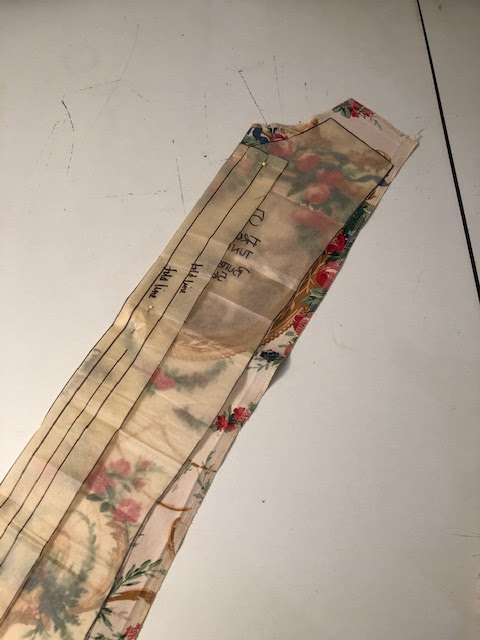 Yes, originally I added some extra to the
side seams to give the shirt a looser fit 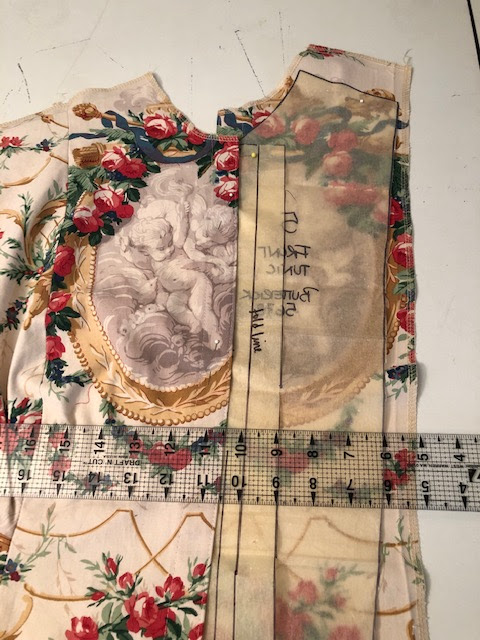 o  I recut the front neckline and shoulder and sewed the front placket piece and side bodice together.  Then I realized I'd shortened the armhole by making that adjustment. 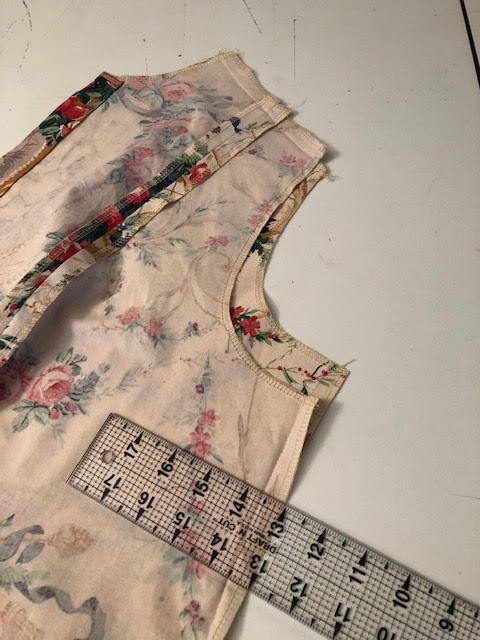 o To fix the armhole, I recut the piece by placing both front pieces on top of each other. Then I cut the altered piece's armhole to match the unaltered piece. This insured that the armhole was fixed correctly. 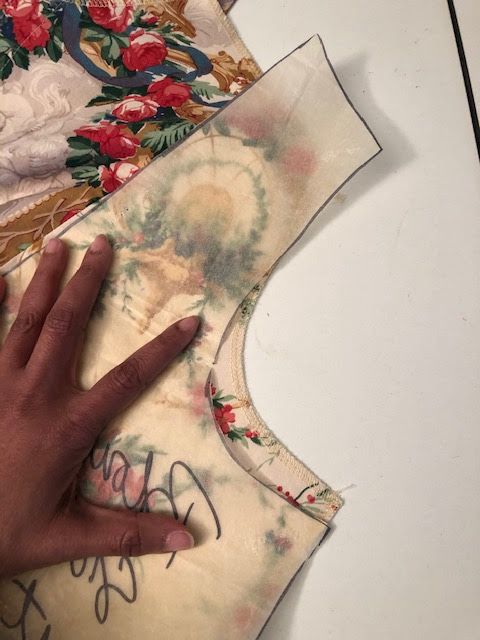 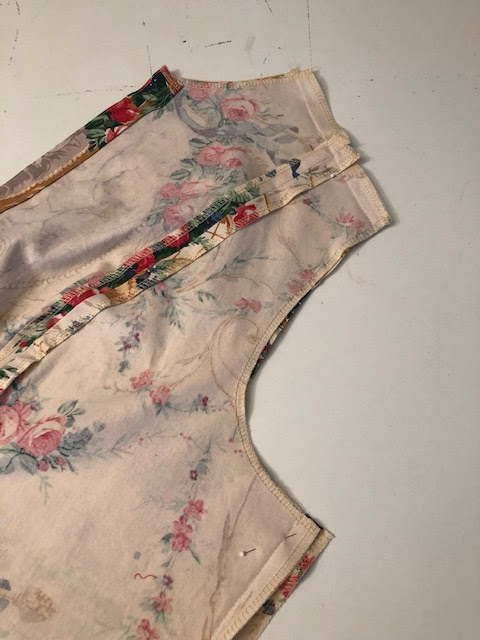 o  Then I cut the extra off the bottom of the shirt front.

I laid everything on the cutting/sewing table one more time and checked to insure the motifs matched on the front.  Then I sewed it together.

Here is how it looks now - front and back views... 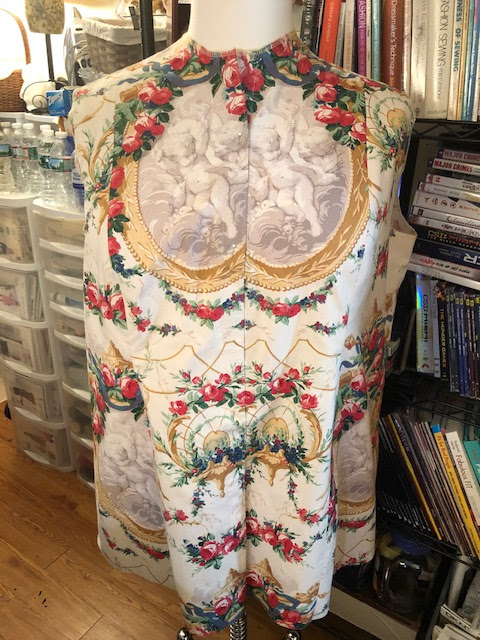 I really like how the motifs form a bib look! 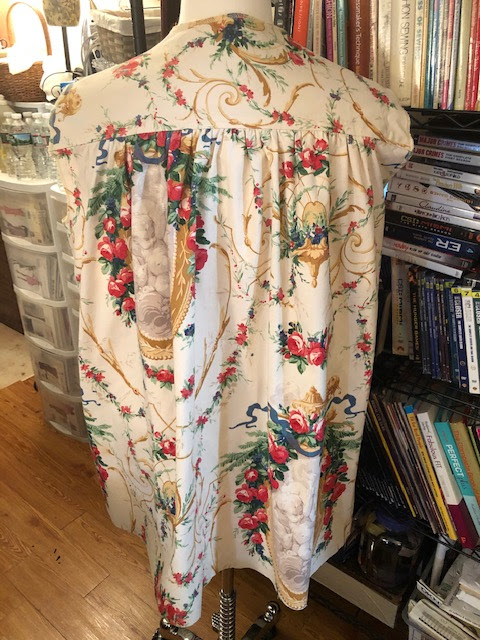 Full gathered back to take advantage of the pattern

I have to admit that this slowed down the construction of the shirt considerably. I was hoping to have it to the point where it only needed buttons & buttonholes like the other two shirts that preceded it. Alas it was not to be but I am glad it was an easy fix. I'm also thrilled that I only needed to rip out the shoulder & side seams and one front piece to make it work.

Since this was a unique fix to an interesting challenge, I decided to document the process separately from the actual shirt reveal which will probably be later this month.