The red & black polka dot dress was made from OOP Vogue 9220. I used fabric that I stashed back when my DD's were mere toddlers. The label on the fabric said that the fabric was purchased from Cloth World. Those of us on the Eastern Seaboard of the USA, know that Cloth World was merged with Joann Fabrics at least 15 maybe 20 years ago! So this was a piece that has waited for some time to make it's world debut.

So here I am in the dress: 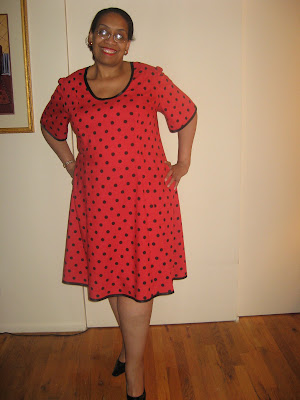 As I previously posted, I added the black trim because I did not want to line the dress and the pattern only comes with a lining and no facing pieces. Too get around this challenge without drafting new pattern pieces, I decided to bind the neckline. With trim I always think in "The Rule of Three"...add it three places to make the trim seem like a planned and well-thought out element. Using that theory, I also added it to the sleeve hems and the hem of the dress. In my mind, it gives the dress a beginning and an ending.
If you look at the sleeves, they have a slight bell shape to them. I would like to say that this was deliberate, but it was an after affect of lengthening the sleeve pattern. I liked the shape, so I kept it.
One more view of the dress: 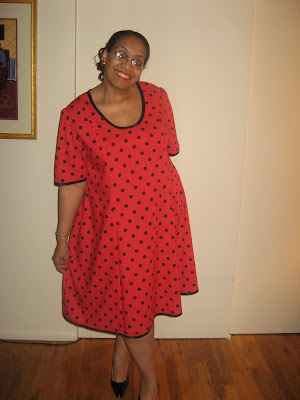 I am wearing this to work tomorrow because the humidity is suppose to be worse than today (Is that possible?) and the temperature in the high 90's, maybe even tipping a 100! Hopefully I will be cool in the street but warm enough in the office and on the bus!
So what's up next? I am thinking about using the brown linen with my TNT Tamoutsu dress pattern with a line of brown mother of pearl buttons marching down the front of the dress...
But who knows...inspiration may strike, more fabric may arrive...so stay tuned!
Posted by Carolyn (Diary of a Sewing Fanatic) at 10:40 PM