My sneak peek yesterday featured a look at the second skirt in the collection. This skirt was inspired by one that I saw in a magazine. I want to say an issue of Lucky but I'm just not sure and of course I remembered the skirt but did not save an image of it! 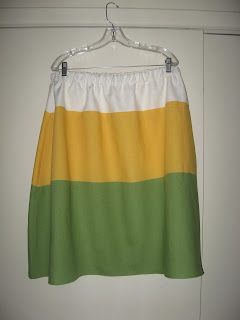 However, it did stick with me. And since I wanted a skirt that would go with all of the jackets in the collection - this seemed like a great time to copy that inspiration skirt.
Some stats:
Pattern used:
TNT 4-gore skirt. The front and back pieces were cut on the fold using one piece of the 4 gores.
Fabric:
8.5" x 60" strip of white silk/linen
11.5" x 60" strip of yellow linen
13.5" x 60" strip of green linen
All fabrics were purchased from Fabric Mart
Notions:
1 yard of 1" wide non-roll elastic
Construction Sequence:
*The challenging part of making this skirt was figuring out the proportions of the stripes and where they would fall on my body. I knew that I wanted the white stripe to be at the top of the skirt and to be the smallest of the stripes. 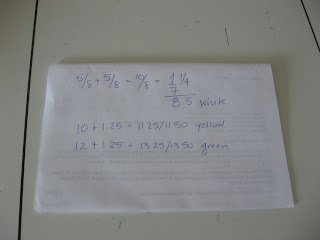 *So to figure out a pleasing proportion, I drew lines on my pattern piece and held the pieces up to me in the mirror to see if the stripes fell in a pleasing manner. I then measured the sections and added 1.5 inches to the total. 1.5 inches to cover the 5/8" seam allowances that needed to be added to either side of the strip. 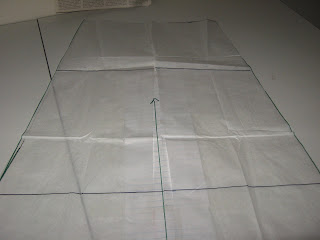 *Then I rotary cut the strips from the yardage. Pressed each strip flat and serge finished the edges. Which in of itself was a process because I had to change the color of the serger thread for each stripe...*sigh*...anal I know!
*The panels were sewn together...once again changing thread in the sewing machine to coordinate with the fabric...and the seams were pressed flat and then down facing the darker side of the fabric.
*I cut the front panel first on the fold and then used it to match up the stripes on the back piece so that the side seams would match the entire circumference of the skirt.
After insuring that the stripes matched, it was simple to construct and finish the skirt. I debated whether or not to add a lining and finally decided against it. I had the same conversation with myself about whether or not to topstitch the stripes but finally decided to go with a simpler look and not use any topstitching.
I have to admit that initially when I sewed the panels together, I was a little concerned that this idea wasn't going to work. However, I am thrilled with the final product. Now I know that hanger shots are not as good as real body ones...but I will do a final reveal at the end of the process with me wearing all the pieces and some possible combinations. I have to leave a little sumthin' sumthin' to the end...*smile*
I had a question from Tanya in my last post that I want to answer....
"I have a question for you: In the pieces I've seen, it seems you favour elastic waistbands. As a plus girl myself, I certainly appreciate the extra comfort and ease afforded by elastic, but I've always heard that a flat, fitted waist is more flattering on a plus figure. What do you think?"
I think the reason this advice is given is because the fabric tends to bunch up around the waist giving the wearer a larger looking waistline that can be unflattering.
However, I like elastic waist skirts. I'm never going to tuck a shirt in and/or add-wear a belt. Even though other plus size women do...I just don't like the look on me. So I had to find a way to make an elastic waistline work...and what I found is that if I cut the elastic to just the right length, then insure that the gathers are formed evenly around the skirt, and finally stitching in the ditch on the side seams to make sure that the elastic and gathers don't move...I get a pretty flat waistline. I also make sure that the casing is not that much larger than the elastic.
See I carry most of my weight in my abdomen, behind and thighs...giving me alot of waistline. So the elastic actually stretches quite a bit more thus reducing the amount of bunching/gathering that most people don't like.
Now I don't just make elastic waist skirts...I have a straight skirt pattern that I use quite often...it has a zipper and a waistband and was last used in the Lucky pencil skirt challenge. Can I also say, that I understand the need for gleaning fashion advice from "the experts." However, as with all things I think you should take it with a grain of salt...even comments offered by me! You need to figure out what works for you...and if it breaks a rule so be it. If you look good in it...it is comfortable to wear...and it fits your lifestyle...I say go for it. Because I'm all about breaking the rules to get the clothing and effect I want!
Also Beth commented that the skirt was made from scraps...actually these strips were cut from the yardage before the other garments were made from the fabric. It was a deliberate idea to use the strips...not an afterthought.
This is the fourth completed piece in The Sunshine Yellow Dress and Jacket Collection...more later!

Posted by Carolyn (Diary of a Sewing Fanatic) at 6:30 AM