I made two versions of this jacket back in the spring of 2007. The brown eyelet one only gets worn with the dress that I made to go with it. But the little white one made as my "wearable muslin" saw a lot of wear last summer. So much so that I thought I really should make another one.
After the gelato colored linens arrived...thanks, JoanneM for a great description...I knew that I wanted several more of these little jackets. Now I know that to some this may sound extreme...five of the same jacket just in different colors...but I need a jacket most days at work. And since I commute on public transportation, I ALWAYS need a jacket to keep me from becoming a fudgsicle because the air conditioning is just too high on the bus!
The original little white one worked so wonderfully for me last summer...it was professional when it needed to be...casually cool over a pair of jeans with some heels...and business casual with my 4-gore skirt and a tank top. It was a wonderful piece so three more didn't seem too many when I was planning this wardrobe.
Actually, though there will only be two...the green linen one and a white silk/linen blend. I decided that the yellow one was a little too much color for me!
There aren't many changes from the original one...see this post for the construction details.
*However, I did add one inch to the hem of the garment, and 2.5 inches to the center front for these two jackets. I made this change to both the jacket front piece and the yoke front piece.
*I made a seam in the back yoke piece for added interest...when the original pattern calls for this piece to be cut on the fold.
*I also added an inch to the center back seam and the back yoke piece and for this version I added quite a bit of topstitching to it.
This jacket is unlined and as such it needed some interior finishing. For the green version, I thought it would be kewl to add a Hong Kong finish using bias binding strips cut from the coordinating dress fabric. All of the vertical seams were finished using the Hong Kong finishing technique. For the armhole seams I just folded the binding in half and sewed it down. And I used the flat bias binding as a hem facing on both the jacket hems as well as the sleeve hems. 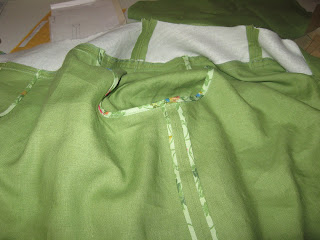 I love how the interior of the jacket looks with this very colorful bias binding.

These two buttons were pulled from the collection since they coordinated beautifully with the both the jacket and dress fabric.

I only added two buttons to the top because I didn't want to take away from the original design. However, I did resolve the closing issue that I had with the first two jackets that are referenced in the original post.
Here are some shots of the white jacket's interior:

Yes, I made the bias binding for this jacket too using a roll of unfinished bias strips that I've had for several years.

And one of these buttons will grace the front of the jacket:

I also underlined all of the jacket pieces with a fine cotton batiste for this version because I thought the fabric needed a little oomph to it:

The white version still has some finishing to be done to it...hems, buttonholes & buttons added before it can go into the rotation! But it will be ready to wear for the new work week.
I'm really happy with both new versions of this jacket and highly recommend the pattern!
Today I'm off from work and will sew for a little while after watching the Little Prince so his Momma can do some errands. I really want to start work on the Butterick 5347 dress. I have the best yellow cotton/silk paisley print waiting for this dress which when finished will work sooooo well with both jackets!
As always...more later!
Posted by Carolyn (Diary of a Sewing Fanatic) at 6:30 AM