I hope everyone who celebrates enjoyed their Thanksgiving holiday!  Mine was filled with lots and lots of good food and family.  We ate ourselves silly and then proceeded to solve every problem that was wrong with the world!  *LOL*  Alot of reality TV was discussed, who knew so much of it was watched by my family...and card games abounded.  But the most amazing thing about the day, was the dayum snow!  Yes, peoples it snowed yesterday, here in my corner of the world.  No, it did not stick but the audacity that it would be doing it so early in the fall/winter season does not bode well...*sigh*

Today, I have spent the morning pretreating all of my fabrics for The Pinstripe Follies wardrobe.  For the first time I tried Pam Erny's way of pretreating wools by using the towel and dryer method and can really see no difference in this method on the treated wool vs. my iron/steam method except that I surfed the internet while the dryer did all of the hard work...so I will be using this technique again!  The last set of poly charmeuses are in the washer now.

However, yesterday while surfing the internet, prior to going to dinner, I got inspired by a dress that I found on InStyle and I decided that since I have three days to sew why not sew something I wanted as well as something from the plan.  So this afternoon, this fabric: 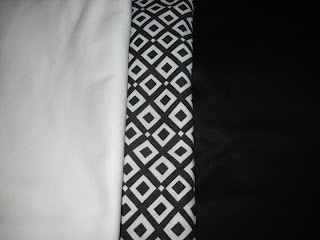 plus this inspirational dress: 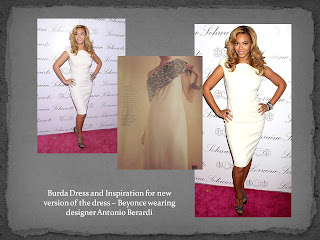 will become another version of the BurdaStyle 09-2005-115 dress just with 3/4 length sleeves. It's getting cold here and I do NOT like being cold! 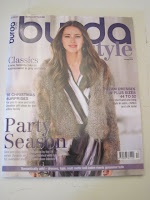 On another Burda note...I bought my copy of the December 2010 magazine Wednesday morning...last night while watching television I perused it.  I know that there have been some complaints about some of the crafts showcased in the magazine but I have to say that I thought the gift ideas compiled for this issue were quite charming.  But I guess what I liked most is that the magazine is chock full of embellishment patterns that can be copied and enlarged and added to garments at a future date...look for them because I saw some interesting embellishments!  *LOL*  ...some that were in the back of my mind to be included on a dress or two...

I did partake in one more fabric sale...Fabric.com is offering anywhere from 20 - 30% off their fabric depending upon how much fabric you buy...so I restocked some of my basic colored rayon bemberg linings.  I love that I can order it and have it shipped to my apt instead of having to schlep it out of NYC!  However, I still buy special colors from NY Elegance Fabrics...their selection is like rainbow heaven and when I want a special match, I head there first! They also sell it in 45" and 60" widths.

Well I'm off to sew...I've got some Mountain Dew...some DVDs and no plans for the rest of weekend...since the SO is working all weekend...