While I was at the airport headed to The DR, I picked up the latest issue of InStyle Magazine (March 2011).  Of course  they are touting all of the new spring pieces but this Versace dress caught my eye and touched a creative nerve: 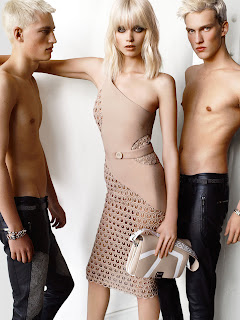 (courtesy of www.Versace.com)
When I first looked at it...I mean became obsessed with it, I thought that I would corporatize it for a new spring/summer dress using a navy blue eyelet and linen that are in the fabric collection.  But as I continued to obsess over the dress, I realized that I have an awesome navy blue lacy wool knit that I got from Elliott Berman and some navy blue wool crepe that would work for a dress that's wearable right now!  At this point I started to get really excited...which resulted in the three hour digging fest described in the last post.

Now let me stop right here to explain my obsession...it's the details in this dress...not so much the shape.
I never planned on making an exact copy of this dress.  Seriously, this dress has no lining and hugs the model's curves (curves that have gone missing from my body lately!) *LOL*  It's important that you realize this before I share the final reveal...and don't go looking for pictures of a finished dress yet because this is the first of four posts about the journey. 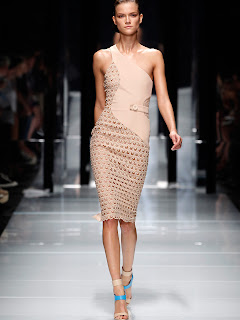 (courtesy of www.Versace.com)
It was interesting that while I was waiting, I could see the revised "corporatized" version of the dress in my mind...because it's the details (yes, I've said it again!) that are intriguing me and how those details could be added to my TNT dress pattern.  I know I'm headed back to TNT Land to make this dress.
I've watched the dress "walk" several times on Style.com and on the Versace site so that I could see the back views.  After all of this watching, I've made a few rough drawings of how I'm going to "interpret" the front: 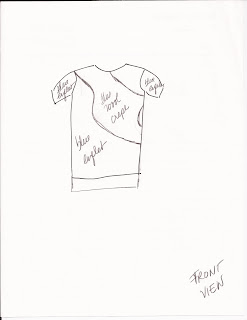 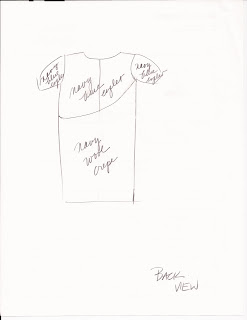 So this is what I'm working on during this three day weekend.  I will start the pattern work this morning because it's going to take some creative cutting to get the details worked out on my TNT pattern.

If I finish the dress before the weekend is over, I will try to complete the straight skirt and coordinating cardigan from the Anna Sui knit I just acquired from Fabric Mart.  If I don't, well there's always next weekend because this weekend I've chosen to sew something I'm really excited about instead of something that's laying on the cutting table waiting to be completed.  I know I will get back to it...but this...this is special!