I've made a lot of cardigan sweaters using Burda 8869.  However, the pattern only has a v-neckline version and I've always wanted to make my own crew neck cardigans.  I've tried a few other patterns but none of them worked as well as the Burda one.  Last night, I got the bright idea to use my Burda TNT pattern as the basis for the Butterick one...and it worked like a charm! 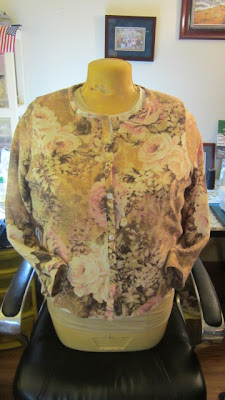 
Notions:
Baby interfacing from Farmhouse Fabrics
5 - 3/8" buttons from the collection


Construction Details:
I started with a size 22 - which to me is a slim 22 not a woman's size 22 especially since the finished pattern piece measurements are 45.5" at the hip line.  So I added several inches to the sides of the front and back pieces by layering the Burda TNT pattern, the actual pattern piece and a piece of tracing paper on top to make new pattern pieces.


I also altered the armhole opening.  Because of this I used the sleeve pattern from Burda 8869 instead of the piece included in the pattern envelope.  That way I wouldn't have to worry about making alterations to the new sleeve's bicep area.


Some additional tidbits:
*I used stay tape in the shoulder seams to stabilize the knit.
*Stitch witchery was used in the hemline, which was pressed together, before stitching it down.
*Instead of cutting the back piece on the fold, I added a 5/8" seam allowance and sewed the two pieces together.
*The pattern instructions tell you to slip stitch the neckband down but I carefully topstitched it instead.
*I added an inch of baby interfacing to the sleeves hems and machine stitched them.


After that it was an easy sew and would have been even easier if I had followed the instructions.  I kinda went my own way so my neckband and front band were improvised.  Really, I should have just followed the pattern instructions because I would have had a cleaner finish at the hemline.  Other than that it really was straightforward sewing...and I ended up with a new pattern for a crew neck cardigan so that's a good thing. 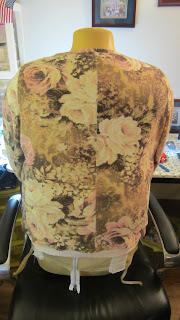 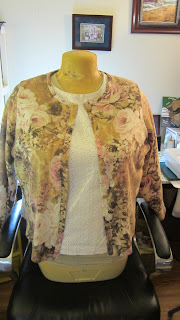 the back and front views 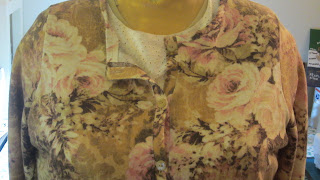 close up of the crew neck buttoned 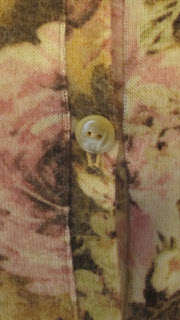 Finally, I know that yesterday I said that I was going to work on one of my three involved projects...but today I just wanted to sew something quick and easy...something that would let me feel the joy of sewing and bring a little settling to my creative soul...yet let me produce a completed garment.  Sometimes you just need a quickie...*LOL*


Posted by Carolyn (Diary of a Sewing Fanatic) at 9:50 PM