Please note that I didn't say final!  There are a still a few more things that I want to do to the room but they are small things and of course involve more purchasing...*sigh* 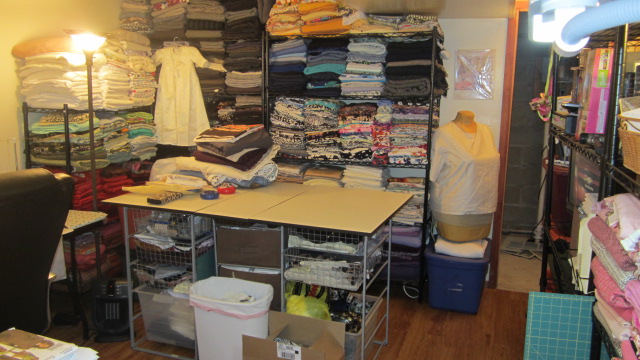 Full view of the room from the doorway 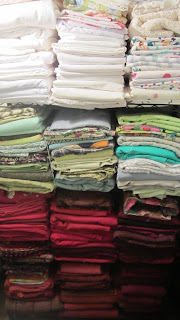 Shelf to the right of the fabric wall 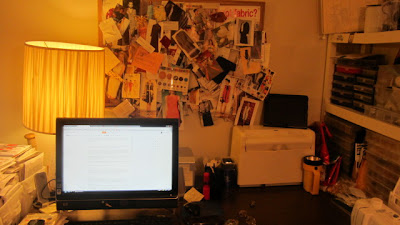 Computer wall and inspiration board

Lulu by the
fabric wall 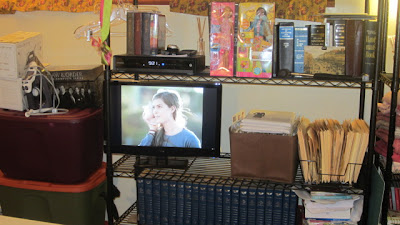 TV & bookshelf by the window 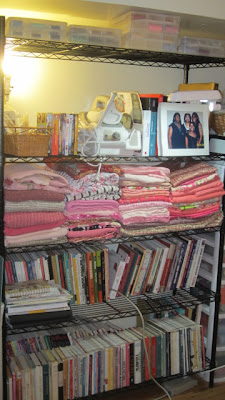 Bookcase across from
the computer table 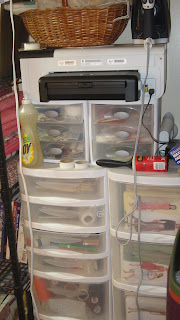 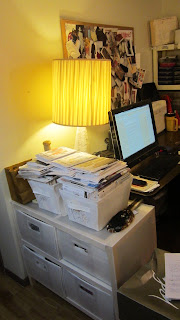 Ikea piece next to computer table 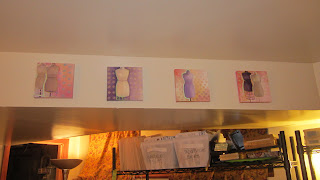 The sewing pictures hanging up
(Thanks Hellene!) 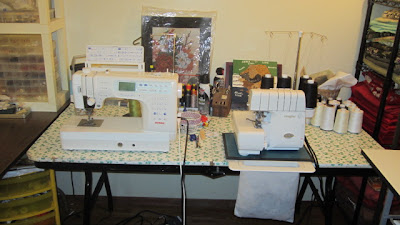 
*I want to add some storage behind the sewing machine/serger to store some notions so that they are neat and out of sight...not bunched up and junky like in the picture above.


*Add some clear storage boxes to the bottom shelves of the fabric shelves, just in case of flooding.  This is something that I'm doing to all the shelving in the room.  I would rather be prepared than have to worry about this later on especially since this is a basement sewing room.


*A shelf on the wall, up by the ceiling, on the computer and sewing machine walls to store magazines and other items.  I just want to maximize the storing capability in the room. 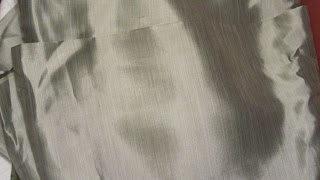 
There were some questions on the posts:
Melody asked:
"If I was planning on securing the shelves to the wall for safety?"
The shelves have been tied together but no I didn't secure them to the wall. It's a basement room that my grandchildren don't have access to and if the shelves fall over while I'm upstairs, well naturally I would be upset. But I guess I would just start all over again...hopefully that won't happen!


Toy asked:
"Are you going to do it by color?"
Yes it is sorted by color except for the shelf with the fabric prints. I know that some people like their fabric stored by seasons or fabrications, but I think in colors and I've found that storing it that way works for me.


Debbie asked:
"How do I prevent permanent wrinkling/fold lines in the pieces at the bottom of the stack?"
One thing is that all of my fabric has been folded and refolded several times in the last few months. Second, all fabrics are pretreated before using and so far I haven't had a problem removing fold lines. Let's hope this holds true! *smile* And yes, I have a few pieces that are at least 25 years old in the collection but they are very few.


Judi asked about which sewing machines I use:
The Project Runway Brother machine that you are referring to from an earlier post was purchased as a back-up machine for my Janome 8000. Then I was gifted the Janome Memory Craft 6600 which I'm currently sewing on and my daughter needed/wanted my Brother so I passed it along. My primary machine is the 6600, my backup machine is the 8000 and my serger is the Babylock Imagine.  I'm still toying with purchasing the Janome Horizon (which the website is saying is retired???) Guess I need to be a little more proactive about that...yeah, right after that bathroom is repaired!


I'm almost sure that someone asked what shelving I used...these shelves were purchased from Lowes in two sizes. Two of the larger 74" high and one of the 54" high version. These match the shelving already in the room and added to giving it a cohesive look.


And a comment or two...
Both Teddylyn and Aunt Allyn commented on moving and setting up new sewing areas, first congratulations on moving! Next, even though I planned out the sewing cave before moving in, after working in it for a couple of months, I found some things lacking. Around December I started rethinking the usage of space in the room since I was actually sewing in it and could determine what worked and what didn't. That was when I really noticed that the bins where a temporary solution and that they made the room feel dark and closed in. So they had to go. My advice to you is to sew in your room first to determine whether or not your inital plan works for you. You may need to revise it.


Finally, plan, plan, plan...it's what made this weekend go so smoothly. I knew what I wanted because for months I'd been looking at sewing rooms on the internet to determine what additional features I wanted/needed for my room.  There are alot of beautiful sewing rooms out there! I'm really in awe of some of them especially the ones that have wonderful windows and are light & airy, filled with lots of storage space. I found that I was most attracted to the quilters rooms because they openly display their fabrics.


Then there was Shannon's (Hungry Zombie Couture) beautiful new sewing space, specifically her fabric closet that also heavily influenced me. She has written two great posts about her fabric closet, the initial one and a follow-up one on how she folded her fabric. For a minute I was so blinded by her fabric organizational skillz that I even attempted to track my fabric. That has gone by the wayside, because like some of the commenters said I just don't have time to invest in keeping track manually of my fabric collection...but I am still in awe of her organizational skillz...mine just aren't that evolved! *smile*


Lastly, I'm glad that I was able to help every fellow sewist who got to show her husband/significant other that there are others that have way more fabric than they do. But I have to tell you that I thought I had more fabric than I actually do. I'm surprised that I've gotten it all onto the shelves with only five additional bins remaining and those bins contain my ponte collection and two are full of sweater knit/coating fabrics then a bin of green fabrics and another of blue fabrics.  The deep stash as Karen calls it!


You may have noticed that there isn't much space on the shelves left for me to grow the collection. This is on purpose.  I'm not saying that I'm never purchasing another piece of fabric, cause that's just unrealistic! But I do want to sew almost exclusively from "The Collection" for the time being. Let me give you an example...the other day I was trolling the internet and all of my favorite online fabric sites for a khaki silk twill. Well guess what I unpacked in the last few days...a khaki silk twill.  I pretty much own some of everything that I could think of or want to use to emulate a designer garment or a sewing idea...so for now one of my primary sewing challenges will be to use fabric from "The Collection."


Now that the cave has been refreshed, it's back to sewing for me! The Rachel Dress Part 2 still needs a couple of hours worth of work especially now that the temps have gone back to normal March like weather. It will be perfect to wear to work this week.