It's Just Another One of Those Days

By the lack of posts you should have known that I did not have a spectacular sewing weekend. Actually it was quite a bust. I don't know how I managed it but both garments that I cut out just didn't work at first and needed a lot of work to make them presentable. I have managed to save part of the first one and have given the other one over until next weekend. However, it is just not how I thought the weekend would be! And on top of all of that, I am not sure how relaxing this weekend has been. 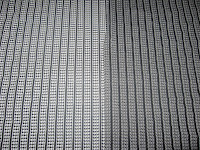 I purchased this knit fabric from Fabric.com and was so excited when it came but this stuff is a bear to work with. The stripes are sheer and on the horrible skirt that I made to accompany the jacket one of the stripes at the waistline ripped. So the fabric needs to be handled with care. Also it doesn't press worth a damn and I hate that unpressed, hands at home made look that an unpressed garment has...let's see what else...I was just disappointed with the fabric and had to work extra hard to get a viable garment.
I started with my TNT Burda Cardigan pattern - 8869 which is OOP. I have used this cardigan pattern alot and I was attempting to make a suit like this one ~ the brown cardigan & skirt from the EOS knit. I thought it would make a great outfit for the busy week of meetings that I have next week. That brown suit has worked well for me at these type of meetings in the past and I was looking to repeat that success with this one but it wasn't to be. 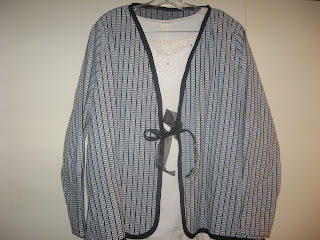 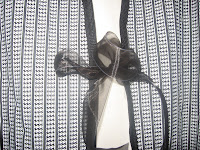 I finally settled on altering the style of the cardigan and adding details like black foldover binding and an organza ribbon tie to help this jacket along. The skirt is just a mess right now.
My original plan was to make my TNT 4 gore skirt but I couldn't get the skirt and the jacket to come out of the fabric with the stripes going vertically. This was probably poor planning on my part but I truly thought that I had purchased enough fabric...NOT! So plan B, the 4 gore skirt with horizontal stripes but just the thought of cutting the gores so that the stripes would match made me want to cry. So I just put the fabric away...can we say meltdown. At that point, I started to clean my house and I just gave up!
I can admit when I am defeated but after sleeping on it, I decided that I have a TNT 8 gore skirt pattern that I could probably make work with a minimum amount of heartache. So I arose bright and early this morning to tame this fabric into shape...and this is what I ended up with: 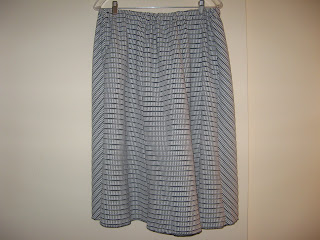 Yeah, I think the fabric got the best of me! *LOL* However, I think I do have a trick for it. I am going to take one of the panels out of the skirt and see if I can save it that way. Can you say I just won't lay down and die....*LOL* But I am not happy with my weekend productivity...and the only consolation is that I have finally made enough garments that I can pull together enough outfits for work...but it just wasn't my plan...
So here is how I will wear the jacket to work tomorrow with the Sewing Workshop mission tank from my SWAP earlier this year and a pair of vanilla tencil pants that I made a year or two ago: 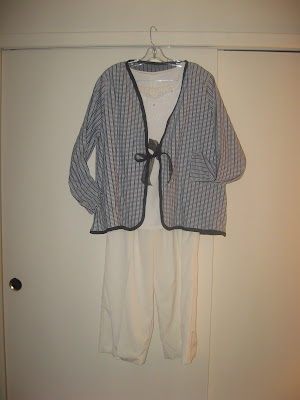 Yes, I know you want to see pictures of me in the garments...tomorrow after work...right now Justin Timberlake's special is playing on HBO and I want to get back to singing and dancing with my daughters! *LOL*
Hopefully next weekend will yield better results...
Posted by Carolyn (Diary of a Sewing Fanatic) at 6:05 PM