Several months ago, I really got into this vintage pattern state of mind because I was looking for distinctive details for my garments that modern RTW is just not offering. I started out innocently enough on Ebay and have progressed to quite a few vintage online pattern sites.

I was originally attracted to 60's styles and Jackie Kennedy's White House years look because these looks translate so well into my corporate lifestyle. Being a young girl in the 60's, I wasn't yet sewing...learned when I was 11...and I didn't have a mother who sewed. So, this has been a hunt and a learning process for me.
One of the designers that I have become enamored of is Sybil Connolly. 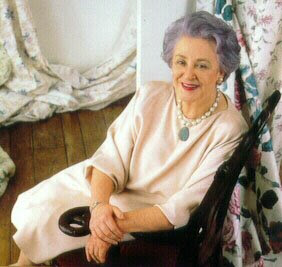 I like clean cut minimalist clothing with detailing that enhances the garment...that's not just there for show or to bring attention. The patterns she designed for Vogue Patterns during the 60's and early 70's fit the look I'm trying to achieve...so now I'm stalking the internet's pattern sites and auctions trying to purchase all of the patterns that I like!

But more on Sybil Connolly...she was born Sybil Veronica Connolly in Swansea, Ireland, on January 1921. She was educated at the Sisters of Mercy Convent. Her career spanned many decades and she began as an apprentice dress designer, Bradley's, London, 1938-40, an apprentice to Jack Clarke at Richard Alan, 1940-43, a director, Richard Alan, 1943-57. In 1957 she opened her own Dublin Fashion House where she continued to design until her death in 1998. She was also a consultant and designer for Tiffany's, New York, 1984-98, and an author and editor, 1986-98.

Her book, Irish Hands: The Tradition of Beautiful Crafts, New York, 1994, is winging its way to me now. And I presently own these patterns: 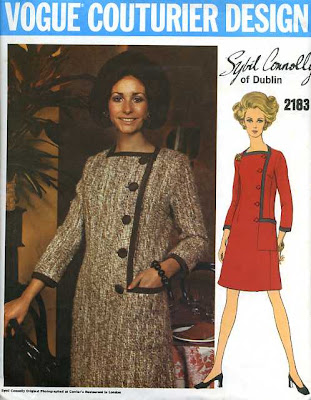 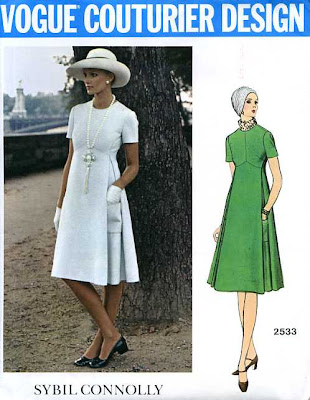 I currently have bids out on several more...so please don't bid against me! *LOL* And a listing of some of her patterns can be found here on Wikia. This listing is not complete but it was a good starting point for me.

I found this quote of hers and believe it is so apropo of today's fashion scene:

There comes a moment in everyone's life as a designer when you have to decide whether you want to create the beautiful or the merely fashionable. Sadly, there can be a conflict between the two.

Sybil Connolly
Of course you will see some of her design elements featured in my upcoming fall wardrobe. I am a fan and I hope that you will be too!
Posted by Carolyn (Diary of a Sewing Fanatic) at 9:17 AM