I learned to sew when I was 11 and I've been obsessed ever since! I did everything I could to learn more about sewing especially since my mom did not sew. I took free classes, joined a sewing club after school, and took every sewing class that I could in junior and high school...and of course, I read the local newspaper.
Because back when I was growing up, there was a "Family" section in the local newspaper. This section is now called, "Home and Garden," and it contained the recipes, home decorating tips, fashion articles, comics and of course the sewing columns.
It was the sewing column along with the mail order patterns that were featured next to that column that fascinated me. The Sunday edition of the paper was the best because it had the longest column and usually the prettiest pattern, sometimes even two were shown!
My local paper was, "The Star Ledger" and when I was younger, Louise Farmer wrote the sewing column. In later years, the sewing column was written by Sandra Betzina...but back to those mail order patterns that fascinated me so both then and now. You could get a pattern for 50 cents and a self-addressed envelope. Of course, I only purchased one every now and again because I had to use my allowance and because they featured girls' patterns only occasionally. But it was amazing to see the different styles featured weekly and imagine how wonderful it would be to make something from one of them.
That fascination has carried over for me as an adult...especially since I now know that I can still purchase some of those mail order patterns. I have tried to be discerning and only buy the ones that I believe I will actually use...however, my heart still beats a little faster whenever I run across one on the vintage pattern sites or on Ebay.
That's how this last bunch came to reside with me...Ebay! I don't really have much time to troll Ebay because it can be quite a time suck and I need to guard my precious sewing time! But I was enticed by an email containing a list of patterns with zero bids. Yes, I bit, but boy am I glad that I did!
These arrived in the mail last week: 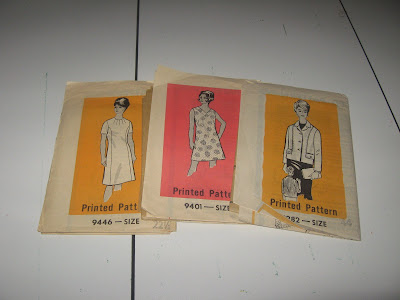 Besides the fact that they were plus size patterns they also featured interesting design features. But I have to tell you, mail order pattern instructions are really just a step up from BWOF instructions...except they at least contain a few pictures of the construction process. Take this one for example: 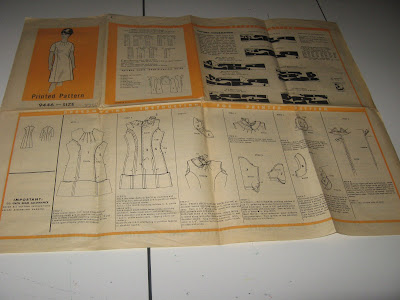 Yeap, that's it. That little square of the bottom half of the instruction sheet are the instructions for the dress pattern. I even flipped the sheet over hoping for more...but no, that's it! *LOL* It is however, full of information and more complicated techniques than a pattern of today...but 1/2 of a pattern instruction sheet!
Of the three that arrived, I really would like to make the dress. No stretch of the imagination there right? And the jacket...I don't know about the third pattern but I'm not kicking it out of the pattern collection! *LOL*
So even though I'm not sewing...my mind is still thinking about it! Hopefully soon...