I know that everyone blogged about the new Vogue Fall patterns last week and they were pretty excited about the new designer offerings.  Vogue somehow managed to make several camps of home sewists happy with this offering...those that love the new designers Vogue is showcasing and those that love "arty" designers/gear like Issey Miyake.  I fall in neither of these camps and am plus size to boot so once again I felt deserted by Vogue.

But after thinking it over for a week and listening to some very sage advice from Sharon, I've decided that hopefully the next cycle of Vogue Patterns will offer something for my lifestyle.  But this is two pattern cycles that I really feel overlooked by Vogue...and I LOVE Vogue Patterns!  I'm not a BurdaStyle girl...tracing patterns blah!  McCalls Patterns are really aimed towards the younger set and I'm still waiting to see what the Early Fall Butterick collection will bring...so until my Vogue Pattern Magazine arrived late last week, I had pretty much written off the new Vogue fall patterns.

Now this isn't to say that I suddenly fell in love with this new fall offering, let's just say that with time and some patterns photographed on models I found a couple that I would like to own.

I totally overlooked this pattern on the website because the first pic is this drawing and it is totally uninspiring: 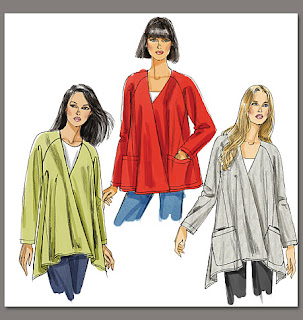 However, I saw this photo in the VPM and I totally want this topper now.  It will be great for crisp fall mornings but not too warm for the trip home from work.  Also, it will work over my fall dresses and give me a pulled together look for my office.  I'm thinking Vogue should have lead with this photo: 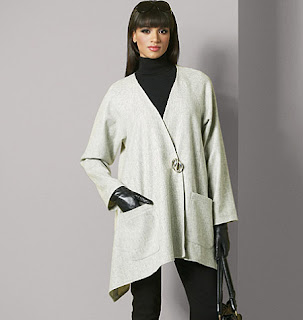 Vogue 8675 - what a difference!
I also really like this turtleneck pattern: 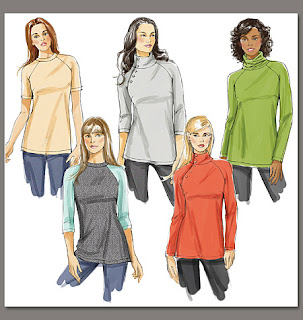 Vogue 8670
I love the variations and really would like to try my hand at making some turtlenecks for myself...btw, I live in turtlenecks from November to March ~ I can't stand my neck being cold ~ so I was excited to see this pattern.

There was even a dress I liked.  I don't know if I will be able to make this work for me with the waist seam but I really like the pleated skirt on this and may have to hybrid it...but I will pick this up during the next good Club BMV sale: 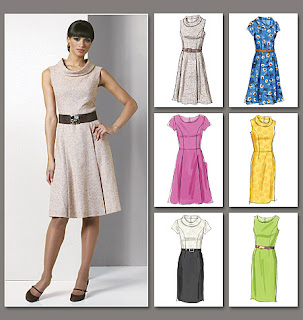 Vogue 8667
Otherwise...I'm still sitting here waiting...and if nothing appealing comes up in the next Vogue offering...I'm packing my tent up and decamping from the Vogue site.  I will just sew from the boatload of patterns I bought from Vogue last fall and realize that life is a cycle and if I wait long enough...it will circle back around to me.