The Summer of the Knit Dress

Until this spring/summer I never sewed alot of knit dresses...maybe one or two a season but never as many as I've made this year.  I'm actually a little surprised because this is really stepping outside my comfort zone to wear and own this many knit dresses.  However, all of the real applause goes to Vogue Patterns.  Their spring/summer offerings were just awesome and not only did I purchase quite a few patterns...for a change I actually made quite a few of them too! 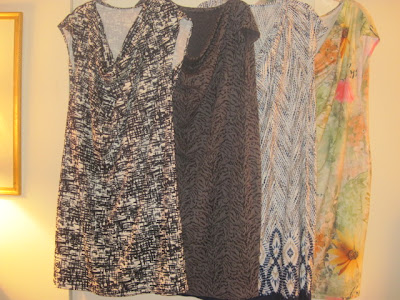 left to right: black 'n white ponte knit, black 'n gray knit,
Anna Sui border print knit and a buttermilk knit from EOS
I absolutely love these dresses and have worn them all more than once this summer.  They are comfortable to wear, professional enough for my job and always garner compliments.  I still want just one more in a black knit...

I used my TNT pattern to make a couple of knit dresses...the first from a cotton pique knit purchased from GStreet Fabrics in Rockville, MD on the great fabric shopping adventure.

and the second from a striped knit from Elliot Berman in NYC. 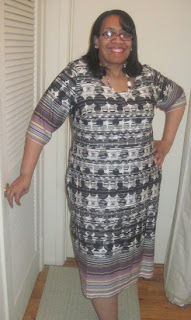 The next one ended up being one of my favorite dresses of the summer.  It's the Christine Jonson princess seam dress... 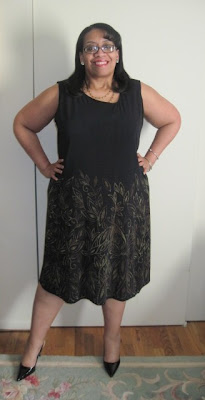 Then another DKNY dress stole my heart...Vogue 1179...a pattern that I would like to use again before the cold breezes of winter touch me...

Finally an oldie but goodie out of print Vogue pattern slipped in...Vogue 9245 from an ITY knit... 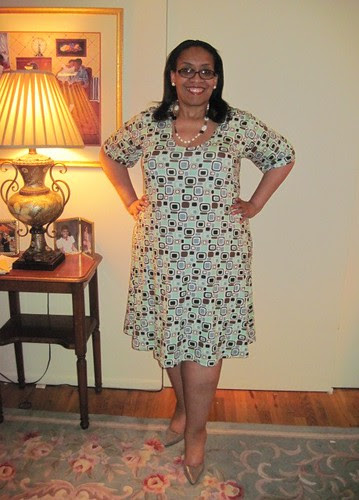 I've learned a few things from the summer of knit dresses...

1.  As a plus size woman I can wear knit dresses in more styles than I previously thought.

2.  That knit dresses are a fast and gratifying sew...much less involved than some of my woven dresses.

3.  That half slips don't always work well with knit fabrics...so I'm gonna have to go back to lining them, if I make as many next spring/summer.

You can see every dress I've made this year in my flickr album.  Even though I highlighted my knit dresses, I made a couple of woven ones too...again, they can be seen in my photo album.  But a whole new dimension has been added to my wardrobe and it's totally because of "The Summer of the Knit Dress!"