As noted in the title, this post is late and was prompted by Diana's post, "Taking Stock of Spring/Summer Sewing". After reading her summary, I decided to go back and check my May to August totals.  Now I haven't included the three dresses from my sewcation since they really were completed in September.  I also didn't include anything that wasn't finished (McCalls 6506) or was a wadder (McCalls 6559).   However, I did take your advice and turned the ill-fitting dress into a long skirt with an elastic waist that was never blogged about. I made the change right before my vacay so that it could go into my suitcase...and it did get worn one afternoon on the ship.

So the total number of outfits that I made during that four month period was 18.  That was 11 dresses starting with The Anatomy of a Dress and ending with the two Vogue 1250s.  Three skirts - two from The Ten Yard Adventure wardrobe and one from the wadder M6559.  One pair of pants also from The Ten Yard Adventure wardrobe and three toppers - 2 cardigans and a jacket. 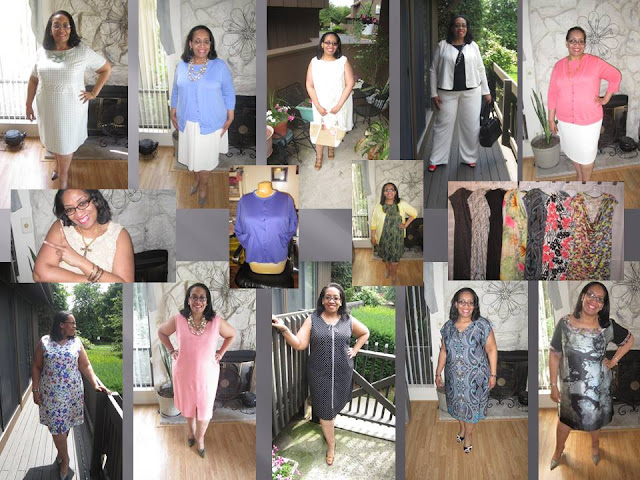 My output is generally better in the four months of spring/summer.  I think it's something about the longer days and the fact that I can sew as many dresses as I like. Everything I made was worn at least once this summer. Some of the Peyton dresses were worn twice. I also took the Trendy Lace Dress on the cruise with me and wore it to dinner one night.

My least favorite item would be Butterick 5211.  Probably because it was fussy to wear and I had to constantly adjust the tie belt.  The other piece that I worried about was The Anatomy of a Dress.  I had some challenges with the zipper so I was worried that I would bust it open in the middle of the day.  Boy was I glad to get home with it in one piece!  The most complimented dress was The Trendy Lace Dress.

It was a great wear especially since it was made from my TNT dress pattern. This dress was complimented over and over again by my fellow employees as well as the visitors we had in the office that day.  It was equally complimented on the cruise, especially by one lady on the cruise who said, "I didn't think full sized women could wear such a beautiful dress".  Since she was plus-size herself and she said it with such awe in her voice, I knew she truly meant it complimentary.

As I said in my blog post, my Valentino TNT dress was the one that made me feel like my sewing had finally arrived.  It was a thrill to realize that I could handle the finer fabrics and not mess it up.

Overall, I believe my summer sewing was successful.  I used some new techniques...preservered through some sewing challenges...tried a new shape...and worked my TNT dress pattern overtime.  I hope my fall/winter sewing is as successful!