This denim dress from Pinterest influenced the making of my second denim dress. 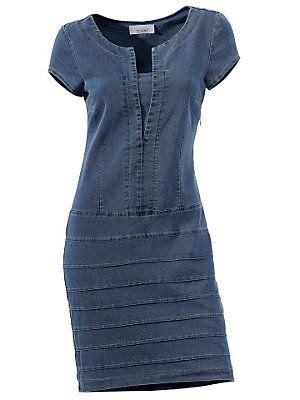 My version of the dress ~ 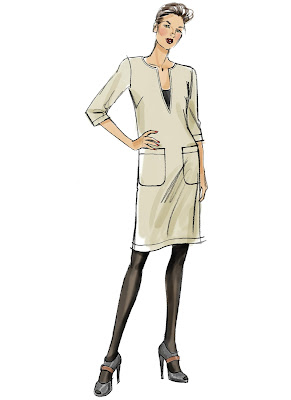 Pattern choice and construction details ~
I honestly thought I was going to start this dress using my TNT dress but after the latest issue of Vogue Pattern Magazine arrived in my mailbox, I saw how they revived Vogue 8824 and was inspired. Then I remembered that I've made that dress. Unfortunately it was one of the dresses that was purged because it had become too big to wear. It was a favorite so I have fond thoughts of this pattern.

Assembling the Bodice ~
The front of Vogue 8824 is perfect to reproduce the Pinterest dress. I started with the largest size the pattern offered - an XXL which is actually smaller than the traced pattern pieces I originally used. So I used the lengthen/shorten line on the pattern front and back to cut out the top of the dress. 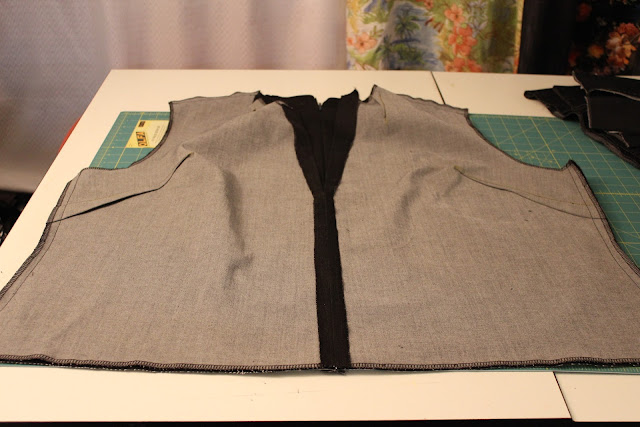 I added a 5/8" seam allowance to the front so that I could make sure my top matched the inspiration dress. I also added a 5/8" seam to the bodice back. One of the things that I didn't like about the original dress was that there wasn't a zipper in the back to make it easier to get into the dress.  With this dress, I rectified that problem.  Though the only zipper I had on hand was a 12" invisible zipper so I added it, figuring that with the wide front neckline opening would help with the shorter zipper in the back.

Tissue fitting helped me to make sure the darts landed in the right place and that the length was good on me. Then after I sewed the top together and tried it on for fit, I realized that I wanted to make the front opening wider. So I folded the front pieces down one more time.

Assembling the Dress Bottom ~
After cutting the dress front and backs out, I measured the front of me and determined that I needed to add another 18" to the bottom of the dress to get the length I wanted. 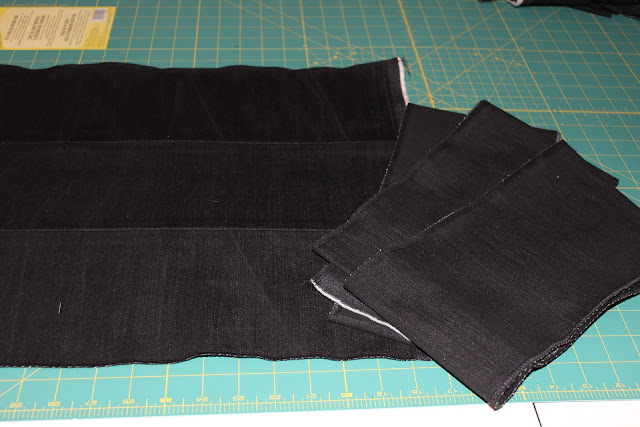 I love the strips on the inspiration dress but to me there are just two many for my shape. So I divided the 18" into 3 and cut 6" wide strips the full length of the fabric which I cut off on either side after the strips were sewn to the dress.

When the strips were assembled and added to the dress bodice front and back, I basted one side seam together to insure the seams matched. Then stitched it flat and pressed it open. That's when the topstitching began...all the topstitching! 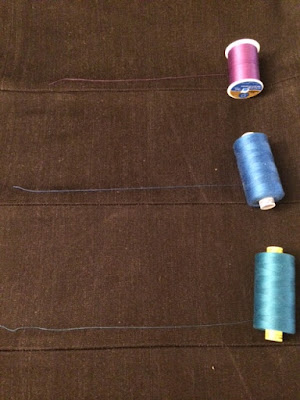 I went with the royal blue choice after sending a sample to Gaylen asking her opinion. 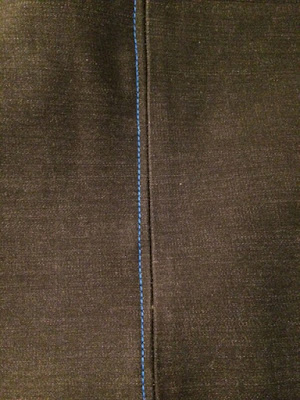 This was also the longest part of making the dress...and the most boring! It took me forever to get the topstitching done because I had to sew slowly and be precise or the topstitching would look awful.

However, when my daughter showed up to take the pictures, it was the part she noticed first and commented on.  So I guess all of the time sewing that topstitching was worth it!

Sleeves ~
I cut the sleeves out with a seam down the center of the sleeve for two reasons. 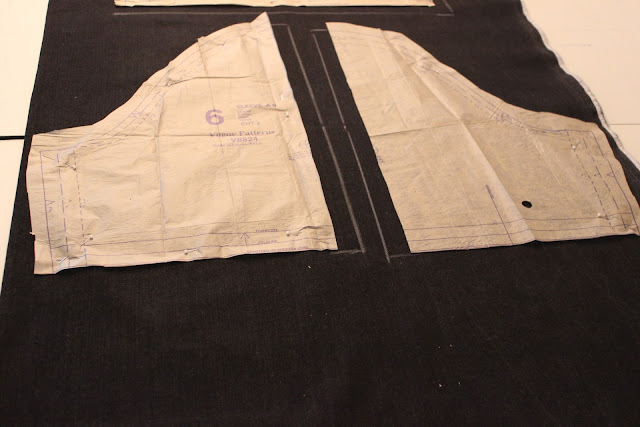 One because I was using the original sleeve pattern and was worried that it would be too tight through the biceps.  Two because originally I thought I would leave a slit in that center sleeve. But when I started working on the sleeves, I realized I had enough space and that nothing should take away from the topstitching.

Though can I talk about the fact that I should have removed some of the ease from the sleeve cap because gathering that excess ease and inserting it into the sleeve? Cause it was a pain. I like smooth sleeve caps and this denim was thick and not easy to manipulate. I took the sleeves out a couple of times and reduced the bulk of the gathers as best as I could. However, it should have been removed prior to cutting out the fabric. 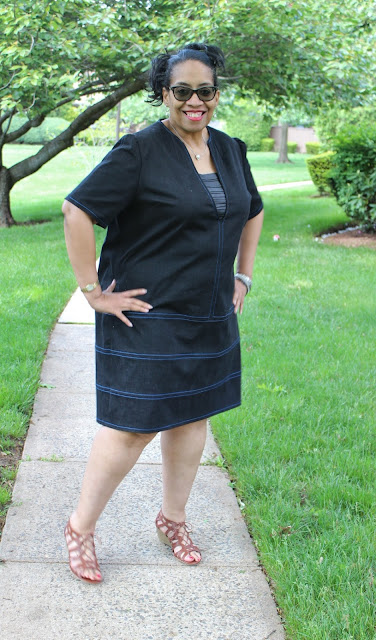 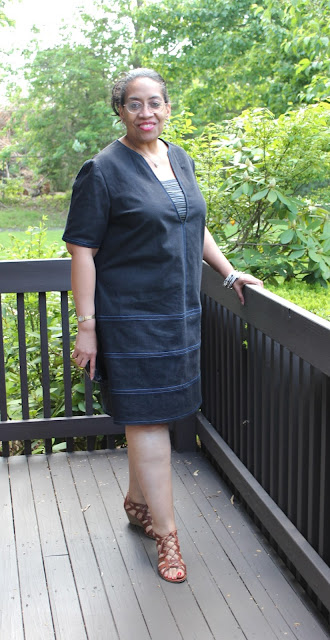 Conclusion ~
When I put the dress on for the final fitting, I was sooooooo happy because not only did the dress fit but it was everything I wanted. Plus it's denim AND a dress, what's not to like!?!

The insert is from a piece of pleather I purchased from Emmaonesock after Christmas last year. I decided to just baste it into the dress front so that it can be removed when the dress is washed and dried.

Finally I love the details of the dress. I loved the challenge of sewing this dress, it made me feel like me again. It will be a great dress for the rest of the chilly spring days we're experiencing. I can also pull it out again in the fall to wear with some tights for another look so it was worth the effort. 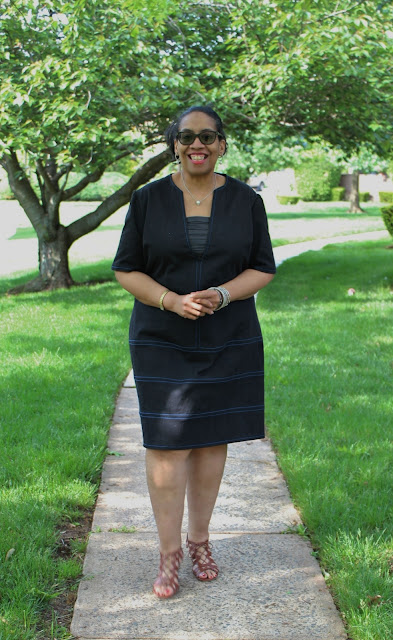 I have two more denim dresses I want to make to before I move onto other pieces. Although as I look at these pics, I realize that I really don't know how to do casual! *LOL* But I'm wearing this to work anyway!