Snoop Shopping in the Largest Store in the World

Yesterday I spent the afternoon at Macy's 34th Store ~ which is the largest department store in the world. I was there last week with my youngest daughter but she had absolutely no interest in the designer duds or the shoe department - two of my favorite floors in Macy's! So yesterday I spent a wonderful six hours there by myself and here are a few of my observations.

First - if you don't own either of these two patterns Vogue 2984 or Simplicity 3631; RUN do not walk to your nearest pattern retailer and purchase both of them. The Anne Klein suit - both the jacket and the skirt are displayed in her designer shop in Macy's EXACTLY the same as the pattern. So you can make your own version of this designer original at home. I know. I examined both pieces throughly and was amazed that Vogue has the license for a design that is selling at the retail level right now.
Now some version of the pieces in Simplicity 3631 was shown in almost every designer's collection that I looked at. The yoked jacket was everywhere - with and without buttons. Some variation of the dress was in most collections or separately on the dress floor at Macy's. The body of the dress was similar but the seam or dart treatment was the distinguishing factor between the dresses.
Another interesting thing to me was the hand and weight of the fabrics used in the garments. I don't shop retail much - okay hardly ever! I mostly snoop shop through the internet, catalogs and magazines so I rarely touch the fabrics used in the garments that inspire me. I was a little astonished at the flimsiness of the fabric...very lightweight...very bad hands that were cheesy feeling and looking...nasty acetate linings that were in garments retailing for over $100 a piece and that was the low end.
Here are some interesting details I noticed:
Snaps - covered snaps in medium to large sizes were everywhere. Beneath huge buttons used on the yoked jackets, used in regular jackets to give the front of the jacket a clean appearance, used at the back of necklines in dresses. Lots of snaps!
Zipper applications - used on jacket fronts (Calvin Klein had a great industrial type zipper with a big zipper pull on the front of one of his jackets!) and on sleeves. 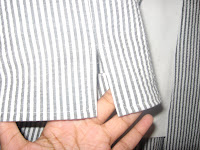 2 piece sleeves with a v-opening at the hem like the application I used for Vogue 8209 - this look was in abundance in a lot of the collections. And the opening was lined so that the jacket could be cuffed...very kewl.
Yoked neck applications were on everything - jackets, dresses, shirts...in all kinds of fabrications and colors. This is as hot a look as the duro look was in seasons past!

Designer Gear:
Calvin Klein had a great jacket in his collection that was made from a subtle plaid in a taupe color. The thing that intrigued me about the jacket was that it had a 2 piece sleeve and the underside of the sleeve was cut on the bias - so the it gave the plaid on the sleeve a very funky appearance. You wouldn't notice it until the person moved their arm - kewl!
Pure DKNY had a great dress ~ that I am copying!!!! It was cut with a t-shirt bodice from a wool jersey and the skirt was made from a lightweight tweed. It was a soft, very straight hanging silhoutte that will definitely end up in my wardrobe!
Tahari had a great silk short sleeve blouse but what provided the interest was the embroidery at the hemline. It was made out of a sandwashed silk and the embroidered hemline was also scalloped. The blouse closed with an invisible zipper in the side. It retailed for $95 and was in the most amazing soft pastel colors. It was displayed alongside some awesome gray suits...tooo kewl.
Ellen Tracy had a lot of wool & wool blend boucle jackets - very soft to the touch with appealing seam treatments such as piping in several fabrications (leather/satin/fabric) and flat fold bias seaming. Most of her jackets had peter pan collars. And there was a lot of color - I kept thinking shades of autumn when touching pieces in her shop.
But the Oscar (Oscar de la Renta) shop had the most color - his garments didn't stand out that much because there was still alot of summer in his shop - but color ohmygosh was there a huge amount of it. A feast to these eyes that are sooooo tired of all black!
Which brings me to something else I noticed...as I was moving around the sales floor I saw that all the sales people were dressed head to toe in black. So I had to ask one of them what that was about. It seems that Macy's has a new policy - all sales associates must wear black. They can add color in the form of a shirt or blouse but that's it. They are dressed in black from head to toe...oh and if the women are wearing a skirt they have to wear pantyhose! This is starting in the 34th Street Store and being rolled out to all the other Macy's so it is coming to a mall near you!
Sooooo, do you want to know what I bought?
Shoes of course:
A pair of flat black patent leather slingbacks 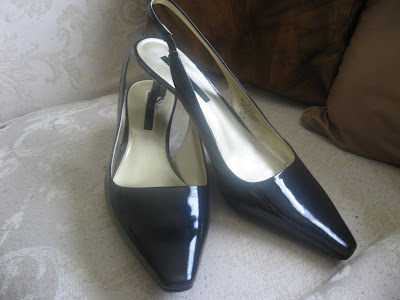 and a pair of chocolate brown slingbacks - in patent leather - can you believe?! 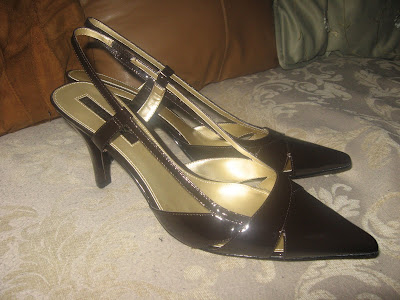 This top in chocolate brown... 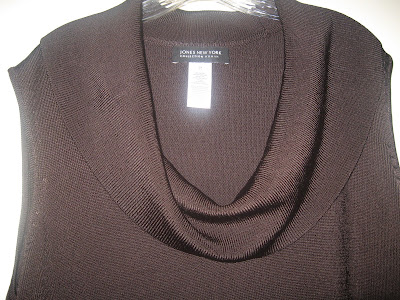 and some jewelry from the Monet counter (yes, I am contrary as I don't have pierced ears!).... 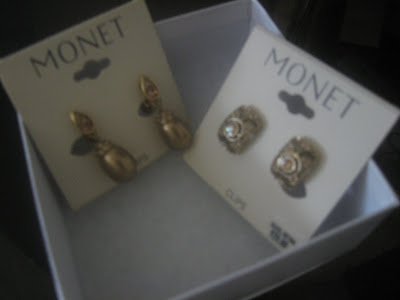 Everything else I could make myself! *smile*
So here is what I learned ~
1. I have worried that my use of trim is over the top and not representative of what's in RTW. Wrong - there is soooo much trim used in designer garments. I think that is what they use to distinguish the garments from the bridge and lower priced lines.
2. I learned that my sewing is on par with the construction techniques used in designer clothing and in some instances I take more care in my applications and techniques.
3. I also realized that the quality of fabric that I use is better than in most bridge lines. In some cases it is comparable to the designer labels - but not in all cases.
It was a wonderful way to spend an afternoon - I mean if I wasn't going to sew! *LOL* I actually got to touch garments that I had only previously seen in a magazine or on the internet. I got to see details and construction up close and my only regret is that I didn't have a camera phone so that I could discreetly take a few pics!
If you get a chance, spend a few leisurely hours strolling around your local department store. Get invigorated to sew more, knowing that you can use fabrics that are of the same quality or better, in patterns that have the same up-to-date stylings!
Posted by Carolyn (Diary of a Sewing Fanatic) at 12:05 PM