I know I should be in the sewing nook working on the Simplicity 3631 jacket...but I don't want to start assembling it and have to wait for lining fabric...well that's not really true... What I don't want is to have to go with my back-up lining choice. See Fabric Mart shipped my lining fabrics on Wednesday and technically it should be here this afternoon, if UPS is delivering on time. Now while I want to start sewing the jacket, I really just don't want to stop. I am home for three days with no plans so I can just sew on and off for the next 72 hours...and that's what I really want to do...so I'm stalling!

Anyway, as I was putting the closet back together yesterday before heading out for Thanksgiving dinner, I found a 3-ring binder that I had placed old Sew News articles in. Articles that I had cut from the magazine because I thought they were interesting but didn't want to keep the entire magazine...I would be drowning in old sewing magazines if I didn't find someway to manage the process! *LOL* And I need to do that again because the magazines are taking over the bookshelf! But I digress, because look what I found! 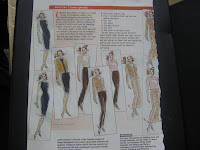 It's an article on cluster sewing called, "Don't be Cluster-phobic" published in Sew News in October 2001. For anyone interested in SWAPping but you don't have the time or desire to sew 11 pieces, this article advises sewing just five to eight pieces. The five piece combo recommends three tops and two bottoms to create 12 different outfits. The eight piece combo suggests five tops and four bottoms. An interesting and very doable concept if you want to start small with wardrobe sewing. 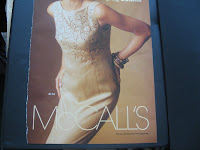 The second piece I found has really started my creative juices flowing ~ it is an old ad for a McCall's shift dress ~ 2114. It is OOP and not in my pattern collection, though McCalls does have several others on their website like (M5464, M5180, M4768, M2401, M8107) that could be used as substitutes. I probably just liked the embellishment technique and I can pretty much figure this out without a pattern's assistance. I am seriously thinking about trying this on my black wool crepe Simplicity 3631 dress. Wouldn't that be some WOW underneath the jacket, especially if I don't take the jacket off during the day and you just get a peek at it! Ohlalala baby! *LOL*
There were several others that intrigued me and will probably show up in future posts...but I guess enough stalling. I could cut out the other pieces that I'm making, right? Make some bobbins, turn my sewing machines on...y'know all the prep work that would allow me to just keep sewing once I start!
So what are you working on this weekend?
Posted by Carolyn (Diary of a Sewing Fanatic) at 10:54 AM