I probably should start this post with the statement, that a pattern is just a guide to me. I feel like I need to make this disclaimer because my jacket has some of the basic components of the Simplicity pattern but several changes that affect the silhouette of the jacket. So here is the jacket: 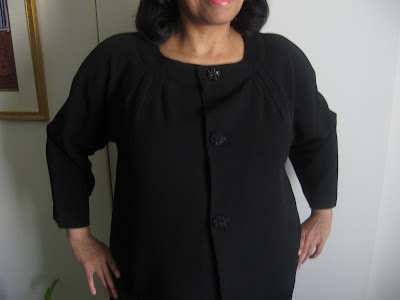 Changes:
The first and most important change is the sleeves. To be honest, I noticed this pattern before it was used in the Sew Stylish magazine. I passed on it because of the sleeves...too trendy for my oh-so-corporate life. When the magazine came out in August and highlighted the changes to the jacket, only then did I become intrigued with the pattern. 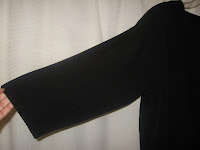 I used the magazine's suggestion for changing the sleeves (page 72) which recommends removing 6" from the hemline. I started with the longer sleeve used in the coat version of the jacket. I thought a 6" reduction would still leave the sleeve hem too wide so I originally removed 8". It was still too big so I reduced the hem by another 2" ~ making my total change 10" at the hem line. I then put in a 1.5" hem so that the sleeves appear slightly bracelet length. This works well for me because I have very slim wrists and didn't want the finished hem to overwhelm my wrists. Yet it still has that "trendy of the moment" jacket I was attempting to make.
Lining: 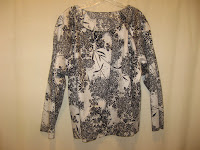 This pattern is designed for an unlined jacket but I wanted a lining in mine so I cut the lining from my third choice fabric. I ordered some of the polyester $1.99 fabrics from Fabric Mart's sale hoping they would arrive in time for this sewing spree - NOT! My next choice was a thin, ltwt. pretty white floral silk (also from Fabric Mart). My third choice was the black/white printed satiny cotton from Metro Textiles. The youngest DD took one look at the black/white and said use that! It's rare that she weighs in on one of my garments and when she utters the, "I would wear that" statement I know its a winner.
The lining was cut exactly from the pattern pieces. I trimmed some excess off the front piece so that it would match the foldover of the fashion fabric. Okay, if you are looking for exact measurements here I can't help you! *LOL* Sometimes when I sew I'm like the cook who uses a pinch of this and a pinch of that! And the reason that I was pinching this time was because the foldover on the pattern is extremely large...approximately 3-4". I was using a size 22 pattern but needed a little extra space in the hem for my hips. I took the extra from the foldover in the front after determining that this is a design feature for the extra large buttons that are shown on the jacket front. Since my button choices aren't that large, I deduced that I had some room to work with there...and I stole it! *LOL*
The lining insertion was a two step process. First, I sewed the lining and jacket together and had to rip it apart because I forgot that the front facings had to be folded back upon each other and stitched down then flipped into the jacket. I originally sewed the lining all the way down to the end of the jacket...so no flipping back and sewing. I ripped out 3" of the lining fabric and then followed the pattern's instructions for the facing...following so far! *smile* After that the lining was basted to the yoked edge and the sleeves. There were a lot of pins involved because I matched the lining up to every seam in the jacket and the sleeves to make sure that the lining did not get twisted during its insertion. 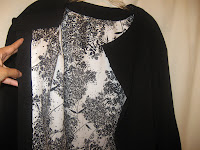 I hemmed the jacket and the lining separately (hand hemmed with rayon hem tape on the fashion fabric ~ double folded the lining fabric and hand stitched it). I used thread chains at the seams to hold the two pieces together. I tried hand hemming the two together but didn't like the look. The thread chains act like a coat lining and work for me.
Did I mention that this jacket probably took 2 to 3 times longer than necessary because of the lining! *LOL*
Interfacing:
I used a lightweight tricot fusing for the front & back neckbands. I blockfused the fabric before cutting out the pieces. And I used a silk organza for the front bands. I interfaced the entire front band as per the pattern, realizing that I was going to end up with the silk organza doubled in the front of the bands but it was deliberate. I wanted the stability for the buttonholes and the buttons (which are a little heavy).
Buttons:
From the previous post you know that I was a greedy little button buyer at M&J last week. I bought both because in the store I couldn't decide. When I got home I had pretty much chosen the vintage looking buttons (Cidell ~ I don't think they are real vintage. Just a good way to describe them.) because they projected more of a corporate air. Then I made the mistake of laying them both down on the jacket and produced a dilemmia...hence the voting. BTW, I asked that question in three places ~ here, at Stitcher's Guild and to some sewing friends. Here the flowered buttons were preferred but at Stitcher's Guild and amongst my sewing friends the vintage were preferred. 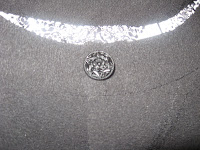 I went with the vintage because the jacket is corporate trendy but not too trendy to stand out as a "What was she thinking?" moment.
A few extra details:
1. I added raglan shoulder pads to the jacket because when I tried it on without them it was too limp. The shoulder pads balance out my hips and I try hard not to make anything without using shoulder pads.
2. The buttonholes are very dense. Since I've learned how to change the density of my buttonholes I have been experimenting. *smile*
3. The tucking detail on the jacket front is sewn as darts. After reading all of the reviews on PatternReview and looking at Linda's, Danvillegirl Sewing Diary's version, I decided I liked the clean look of the darts better.
4. I lapped my version left over right. I liked the way I finished the left side better than the right side and I wanted to lead with my best foot forward when wearing the jacket closed. Not that it will be worn closed often.
5. No belt. I don't have the overly large version of this jacket because all of the design ease was used as wearing ease. It is just a loose fitting jacket on me so I didn't see the need for a belt.
6. I hand stitched the inside yoke bands down. I know the pattern instructions tell you to stitch in the ditch but I wanted a cleaner, less instrusive finish and with the extra layers from the lining fabric I wasn't sure how it would look. So handstitching it was.

If I were to make this again...and I'm thinking about it...I would add a center back seam and a pleat in the center back to make the jacket more looser fitting for my plus size body.
I also cut out a 4-gore TNT skirt from this fabric and the Simplicity 3631 dress in a smoother, lighter weight black wool crepe as well as a pair of TNT pants to be lined. I won't make any tops to go with these pieces because I have plenty in my wardrobe and all of these pieces will mix and match with garments presently residing in my closet. 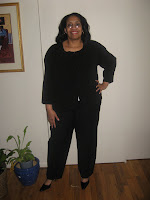 And that's my version of Simplicity 3631...if you are contemplating making this pattern, I hope some of the explanations of what I did encourage you to go ahead and make it your own. And if you are plus size thinking that this pattern is too small or wouldn't work for you, I hope you realize that there is room to play with this pattern to get your own version of it...
But mostly I want to leave you with the idea that a pattern is just a guide. There is no need to make it exactly as it appears on the pattern cover. That you can and should see your own vision for it and run with it...making something that is unique and uniquely you!
Posted by Carolyn (Diary of a Sewing Fanatic) at 9:54 AM