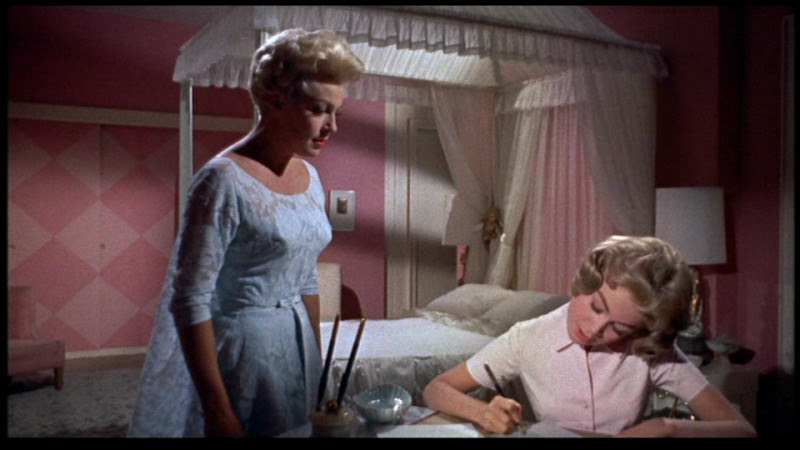 I love old movies and three of my favorite star Lana Turner...
*Imitation of Life
*Madame X
*Portrait in Black
One of the reasons that I love these movies so much (besides the wonderful stories and Ms. Turner's acting) are the clothes. In Imitation of Life, she wears this amazing short sleeve top and pants with a lightly flowing long skirt over it in the scene in her Connecticut home. I can see the outfit in my mind's eye because it is so wonderful!
In Madame X, even though Ms. Turner is a stay at home Mom waiting on her diplomat husband, she is elegantly turned out in beautiful two piece suits, a 2 strand set of pearls and always perfectly coiffed. Many times I've stopped the movie just to gaze at an outfit she was wearing to memorize the details.
So what does this have to do with Jean Louis Bertrault? Well he was the costume designer for many of her films and especially for Madame X. Since they were finally releasing Madame X on DVD, I went in search of more information on Jean Louis Bertrault who designed in Hollywood under the name Jean Louis. And to my surprise, the internet held very little information on him. I couldn't find any biographies written about him and only a few "solid" references.
One in Wikipedia - that gives these bare bone facts about him:
Jean Louis (born Jean Louis Berthauldt, October 5, 1907, Paris, France - April 20, 1997, Palm Springs, California, USA) was a French costume designer and multiple Academy Award nominee in Costume Design. His most famous works include Rita Hayworth's black satin strapless dress from Gilda (1946), Marlene Dietrich's celebrated stagewear on her cabaret world tours, as well as the sheer, sparkling gown Marilyn Monroe wore when she sang "Happy Birthday, Mr. President" to John F. Kennedy in 1962. In 1993, six years after the death of his first wife, Louis married former client Loretta Young.
Academy Award Nominations
1950 - Film: Born Yesterday
1952 - Film: Affair in Trinidad
1953 - Film: From Here to Eternity
1954 - Film: It Should Happen To You
1954 - Film: A Star Is Born
1955 - Film: Queen Bee
1957 - Film: Pal Joey
1958 - Film: Bell, Book and Candle
1961 - Film: Judgment at Nuremberg
1961 - Film: Back Street
1965 - Film: Ship of Fools
1966 - Film: Gambit
1967 - Film: Thoroughly Modern Millie

Actresses Designed For
Rita Hayworth in Tonight and Every Night, 1945, Gilda, 1946, Affair in Trinidad, 1952, and Salome, 1953
Judy Holliday in Born Yesterday, 1950 and The Solid Gold Cadillac, 1956
Gloria Grahame in The Big Heat, 1953
Deborah Kerr in From Here to Eternity, 1953
Judy Garland in A Star is Born, 1954
Joan Crawford in Queen Bee, 1955
Kim Novak in Picnic, 1955, and Bell, Book, and Candle, 1958
Kim Novak and Rita Hayworth in Pal Joey, 1957
Lana Turner in Imitation of Life, 1959
Doris Day in Pillow Talk (1959) and Send Me No Flowers (1964)
Marlene Dietrich in The Monte Carlo Story, 1957, and Judgement at Nuremberg, 1961
Marilyn Monroe in The Misfits, 1961, and Something's Got to Give (unfinished), 1962
Shirley MacLaine in Gambit, 1966
Julie Andrews, Mary Tyler Moore, and Carol Channing in Thoroughly Modern Millie, 1967
And this information, doesn't even list that he designed the gowns in Madame X which it clearly states in the opening credits of the movie.
On the Academy Awards site, you can learn that he was nominated 14 times for Best Costume Design and actually won an Oscar in 1956 for the movie, "The Solid Gold Cadillac", which was filmed in black and white.
He also worked in Hollywood during the time that one of my other favorite costume designers worked there, Miss Edith Head. Of which there are several biographies and she even appeared in a couple of movies...however, as stated before there are no biographies about him, no link upon link on the internet...just the information from Wikipedia, the Academy Award site, the Turner Classic Movie website and a much more detailed costume listing on IMDb.
To me it is a little unsettling, that an Academy Award winner who dressed some of Hollywood's leading ladies during the 30s, 40s, 50s and 60s, is such an unsung personality. So I wanted to do a brief homage to one of Hollywood's finest costume designers...Jean Louis!
And to a little girl who learned to sew when she was 11 and found out at 13, that people actually had careers making those wonderful outfits in classic Hollywood movies, then found a few Vogue patterns by Edith Head, and who watched the "boring" part of the Academy Awards every year to see who the Best Costume Designer was...he is a man of legend!
If you get a chance, check out the fabulous Lana Turner in the movies listed above, especially as Holly Parker in Madame X. Bring your tissues...the ending will make you weep, it is a three tissue picture!

Posted by Carolyn (Diary of a Sewing Fanatic) at 10:21 AM