This is the story of how this pile of scraps: 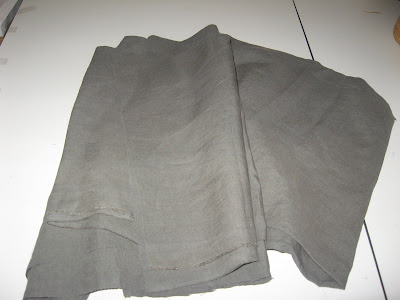 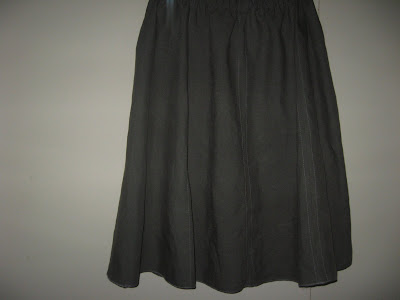 See I really wanted a jacket, pants, skirt combo from the gray linen...but after pretreating the linen I lost some yardage...and I was only able to get the jacket and pants cut out from the fabric.
So the challenge became how to turn the remaining scraps into my TNT 4 gore skirt. Using some very constructive cutting and basically ignoring every grain rule ever written, I came up with a plan. 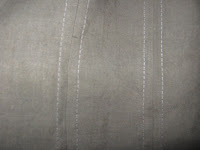 The front of the skirt is constructed from two panels of fabric that are about 3" shorter width wise than normal. From another scrap I added a 6" center front panel with 5/8" seam allowances. These three pieces were sewn together and the Saddle Stitch topstitching was added to the seaming to carry the tone-on-tone seaming detail through from the jacket. 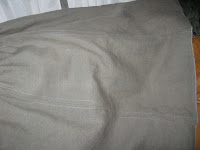 For the back, I had pieces big enough to separate the 2 panels into 4 adding seam allowances to both sides of each panel. Again all of the seams were topstitched using the Saddle Stitch. However, this is very hard to photograph...the skirt just comes out looking very gray and basic...which I guess is a good thing since the tops I have planned are very bright, printed garments.
The skirt and lining still needs to be hemmed...will work on that tonight while I'm watching The Closer...and I have no pics of me wearing it with the jacket yet because I still need to make one of the tops from the collection...yes, sure I have RTW tanks that would work but what would be the fun in that?! *smile*
I set aside the dress because I only had one day to sew. I need time to work out what I'm seeing in my head and rushing the process in a day would only leave me frustrated. So I will work on the dress this weekend and the tops after that!
After tonight, I will have three garments completed. I have to admit that I so love sewing with a plan!!!

Posted by Carolyn (Diary of a Sewing Fanatic) at 7:51 PM