It's been a long journey with many stops and starts, and a few changes of direction but the pantsuit is finally finished. I had to get this one out of the way. It was hanging in my direct view every day taunting me with its incompleteness and my inability to find a way to make the sleeves work...so in the end...I turned the idea on it's head and went in a different direction. A way that is unexpected yet totally satisfying.
First let me warn you that I have no shots of the finished outfit on me...those will come later, I promise! I just have a busy day today and wanted to get this post up...so look for those candid shots at a future date. As an aside...three years later I'm still chanting that I really need to get my dress form some new feet. I need to make that a priority this year!!! *LOL*
So the original project was to make a pantsuit using this pattern: 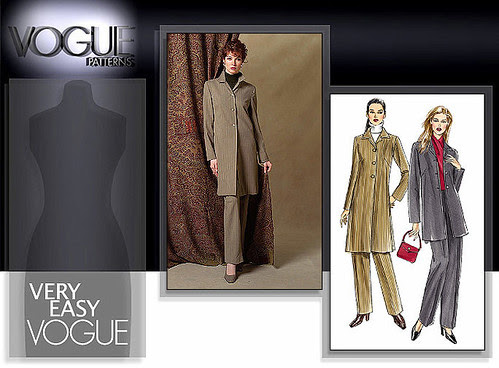 Vogue 7944
A TNT pattern that I've made several times before along with my TNT pants pattern.
Of course the easiest part of this pantsuit was the pants...which have been completed for several months...just hanging around and waiting for this problem child jacket to have its issues worked out! I finally broke down and wore just the pants with the twinset as pictured here: 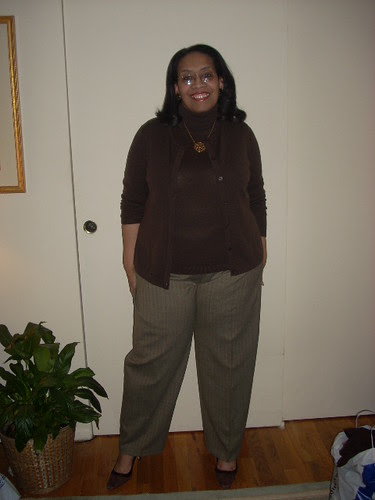 So the problem with the jacket was the sleeves. No matter what I tried, they just did not insert into this jacket well. Which stymied me because I've made the jacket three times before and never had a problem inserting the sleeves...so I let it sit. Periodically, I would pick it up and rip the sleeves out and try something else...still no good. Here is how they fit the last time I inserted them: 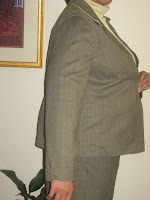 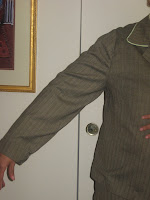 This was bad, really bad and I had resigned myself to the fact that this jacket was just not going to happen...which hurt me greatly because I loved the lining that I had installed...especially the back facing piece: 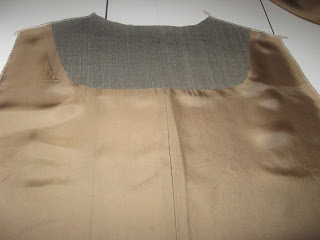 Last week when I was cleaning out magazines (way too many of them come to my house) and sending them out to the recycle bin, I spied an article in Lucky called "Sleeveless Jackets" and I had an Oprah "Aha Moment!" I decided to just get rid of those pesky sleeves. Once I made that decision it was like being released from prison. I knew exactly what steps to take to get this baby finished and onto my back.
So even though I had planned to work on "The Dreaming of Spring Dress" this weekend, instead I cleaned up this niggling project. Okay, how about a peek at the finished pantsuit: 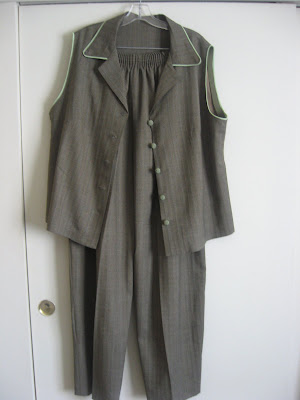 Button closed
The stash I will never, ever complain about is my notion/trim stash...because quietly residing in that stash was a roll of bias cut linen in a complimentary shade of olive green. With that roll, my bias tape maker, a little steam and time, I had bias binding that coordinated with the vest which I used to finish the armholes. 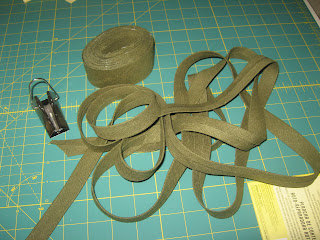 I also added the lime green piping to the armholes to tie the trim all together. 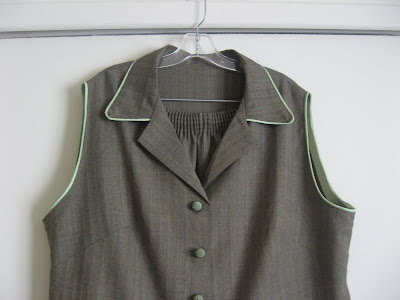 The buttons blended so perfectly with the fabric.
Now I am completed thrilled with this outfit. I will wear it to work this week and it will reside safely in my closet no longer taunting me with its incompleteness. If I could just do something about that red doubleknit jacket and dress....*sigh*
Finally a few stats:
Pattern:
Jacket ~ Vogue 7944
Pants ~ TNT pattern - used wider leg version
Fabric:
5 yards of a striped worsted wool crepe from Fabric Mart
5 yards of bronzed brown lining from Paron Fabrics
Notions:
4 yards lime green piping purchased from Daytona Trimmings
3 yards olive green linen bias binding
5 olive green soutache shank buttons from Sawyer Brooks Fabrics
This is my first completed piece in April. I have a 4-gore skirt that's cut out and laying on my sewing table that I would like to work on tonight after the guests go home...trying to prolong that three day weekend as long as possible! *LOL*
As always...more later!

Posted by Carolyn (Diary of a Sewing Fanatic) at 3:00 PM

Labels: The Making of a Suit, TNT Patterns, Vogue 7944