The Wrap Up and Moving On...

I know that I've bombarded you with posts about the wardrobe, as well as, a ton of pictures...but hey we took over 150 of them and I edited down the final selection alot before sharing with y'all...so a few notes and yes, more pictures before I move on... 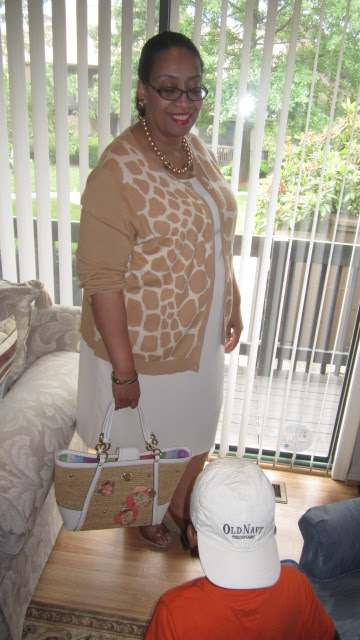 One of my favorite pictures from the day...
The Little Prince kept getting in the shots!


Wearability Factor ~
I've worn the straight skirt and the dress from the wardrobe to work this week. They both performed well and I even managed to make it through the day without staining them...a major concern when wearing such a light color!  I received compliments all week long because the light color really stood out in the dreary weather we've been having here on the East Coast.  Along with the rain and drizzle, it's also been quite cool so these pieces were perfect for the spring-like temperatures.  I won't be wearing them when the temperatures start to soar again but for now they work really well.


I also finally wore the light green plaid dress this week.  It too performed well and will be worn again.  However, most people did not see the waist definition because I wore a ltwt. white sweater with it due to the cooler temps.


And if I looked a little trimmer and well endowed it's due to the new foundation garments that I recently purchased.  I highly recommend this piece because you can wear it with the bras you already own: 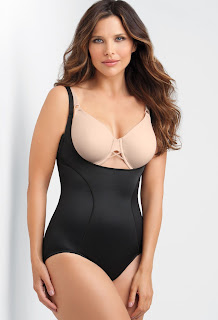 
Sadly, they only show them on slimmer women but I can verify that after wearing this shapewear all week, it was very comfortable, it did slim me down a few inches and it helped lift my sagging bosom to where it should be!  *LOL*  I also developed a bathroom routine after the first day so that I wasn't doing gyrations in the bathroom stall...oops, was that an overshare!  Well if so, put on your big girl panties and deal with it!  *LOL*


There were a couple of questions~
1.  Gaylen asked for more information on the ribbon band that was part of the Burda 8869 cardigan.
*First the ribbon was 1.5" wide.
*Next the neckline and jacket front was serge finished.
*I just placed the ribbon next to the right side of the jacket and stitched it down using a 1/2" seam allowance.
*The seam was pressed against the jacket front.
*The last step was to take the two tucks in the front of the jacket and stitch them flat.


2. There were several questions about my closet and storage methods.
Let me assure you that I have a regular sized closet - actually smaller in this home than in my previous apartment.  However, I do have a lot more drawer space so all of the cardigans, tops, etc. are stored there.


But mostly I'm a huge purger.  Things that haven't been worn lately, have gone out of favor or are stained/ruined in some way get donated and/or tossed.  I think if you have a consistent in & out system in place, you won't be overwhelmed by the amount of clothing that you have.


Finally I try to wear everything I have...if I don't there is a problem with it and I will have to decide if it needs to be purged.  Right now I have a shopping bag full of clothing sitting in a corner of my bedroom waiting to be donated.


Here's a shot from my bedroom floor... 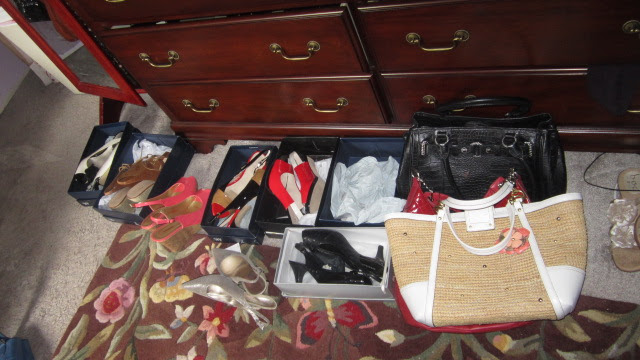 I pulled out quite a few pairs of shoes, purses and jewelry to use during the photo shoot.  My daughter laughed when she walked in saying that it looked like the set-ups she saw when she did hair (yes, she's a hairdresser) at video shoots.


Finally, all the photos of the wardrobe can be found in my Flickr album.


What's Next...
Dresses, dresses and more dresses!  ...and quite a few of them...
I ended up digging around in the collection and finding an orangy fabric to use for the base of the Vogue 8805 dress. 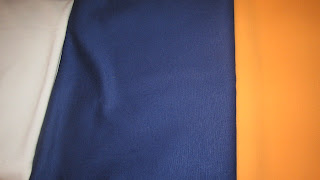 Thanks to everyone who left a comment and shared your opinions, they were appreciated. However, I've decided that I'm going to "copy" the designer dress just as it's sold.  I will be working on that this weekend, hopefully I'll reveal the finished dress soon.


After that I'll be starting a series called, "Ye Olde Familiar" which will feature dresses made from my TNT dress pattern.  The hook will be the fabric choices.   I've been collecting some amazing fabrics and pulling some from the collection to make several beautiful summer dresses - if I say so myself!  *LOL*  Hopefully you will agree with me!


Well there's sewing to be done and I hope that you get the opportunity to sew a little something this weekend too!


Posted by Carolyn (Diary of a Sewing Fanatic) at 7:00 AM