This inspired my next piece... 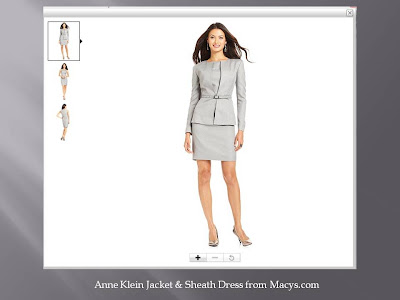 I originally saw it in a Lord & Taylor ad.  Of course I cut out the ad and of course I also misplaced it.  The original ad was well photographed and immediately made me think of Vogue 8815.  You know that top that just everyone is making...there's already 28 reviews of it at Patternreview.  It's one of those patterns that looks good on all body types so of course I added it to my must sew list.

I had all intentions of making it as a top but seeing this jacket/dress combo, I knew V8815 would work for this project.  So I'm using an eggplant wool blend that came with the interfacing attached. 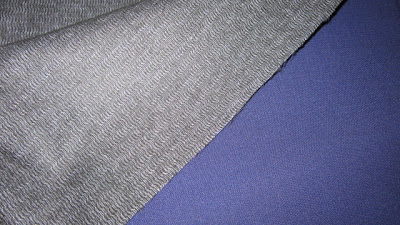 Fabric backed with a tricot interfacing 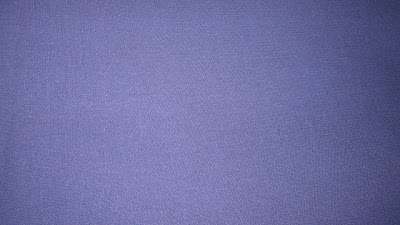 Front view of the fabric

Of course to turn it into the garment I wanted, I made several pattern alterations to morph it from a top into a jacket pattern. 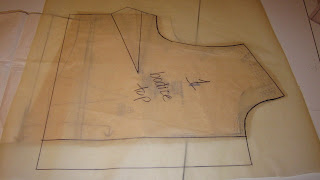 The front peplum ~
Added 3.5"to the center front of the peplum to accommodate the dart that was removed from the hemline.

Then added another 2" to the front for the button closure and 5/8" for the seam allowance. 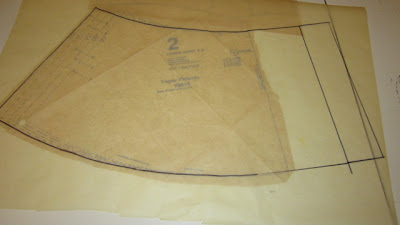 The two pattern pieces together... 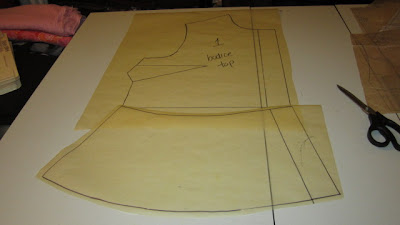 Back piece ~
The dart was left as part of the pattern and I used the center back seam for shaping.  No other changes at all were made to this piece. 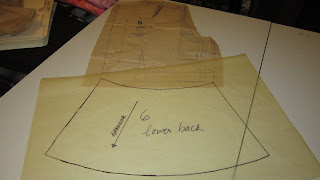 Now here's the conundrum...
I hate making muslins.  At this point, a sane sewist would not cut her good fabric but would find a comparable fabric and make a muslin.  To be honest, I've gone back and forth over whether I should make one...and I really believe that if I did so, that I would never make the final jacket.  I'm just not built to make 2 or 3 unwearable pieces to get the proper fit on a pattern.  It's why I use a pattern so many times.  I'm constantly adjusting the fit with each new garment.  This is not the common wisdom of these sewing times and I realize that I'm bucking against that trend.  But I know me.  I know how I like to sew...and after 43 years of practicing my craft, I'm gonna go with works for me.

Okay so that's where I'm at, taking a deep breathe and taking my shears to the fabric, hoping for the best!  However, I do have extra fabric so if I need to recut or scrap the idea totally, I can still make the dress. I'm fine with whichever way it goes because sewing is always an adventure right?

This may be strange but I'm actually finding that I'm enjoying sewing more when I make one of these involved pieces...and this sewcation has been all about the involved piece.  Probably why my output has been so low but instead of the frustration I felt during my last sewcation, this one has been creatively fulfilling.