After making a ponte version of my TNT dress pattern, I pulled a lightweight silk/wool twill border print from the collection for my next version.  This is another one of those Fabric Mart purchases made during the frenzy of a 40% off sale. It was purchased in August 2014 which means it had a pretty short stint in the fabric collection. 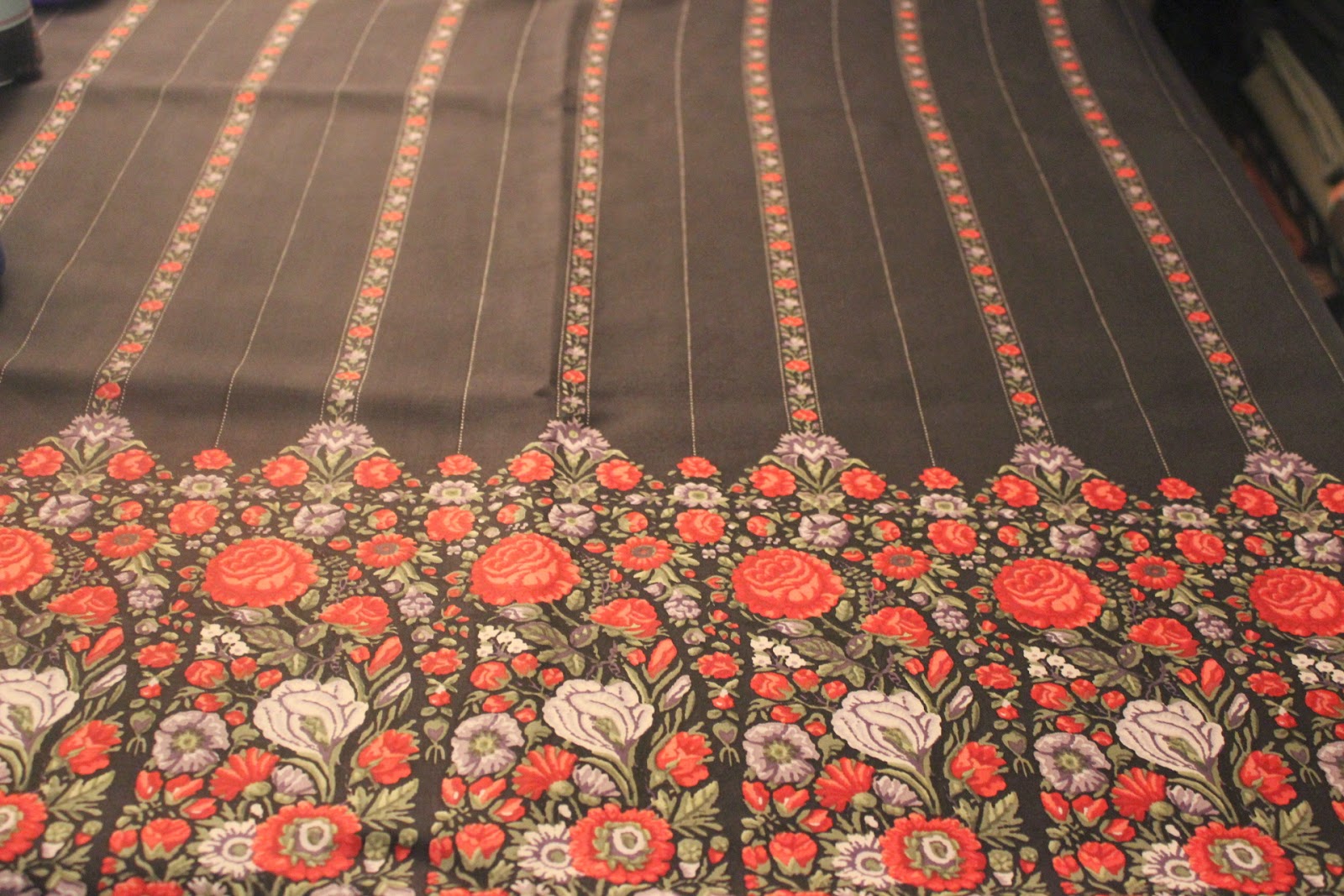 I chose this fabric for the next version because I'm trying to make better fitting dresses that will stand out.  I own plenty of solid colored cardigans that can be worn with them since this is my go to outfit for work.

The challenge for this dress ~ making sure the border print works all the way around the hem of the dress. The fabric is only 44" wide - probably why I purchased 3 yards instead of my normal 2 - and the pattern pieces hang over an inch at the hemline.

To handle this challenge, I used a single pattern piece layout on the fabric. This meant that I had to make additional pattern pieces for the center back and side back pieces. 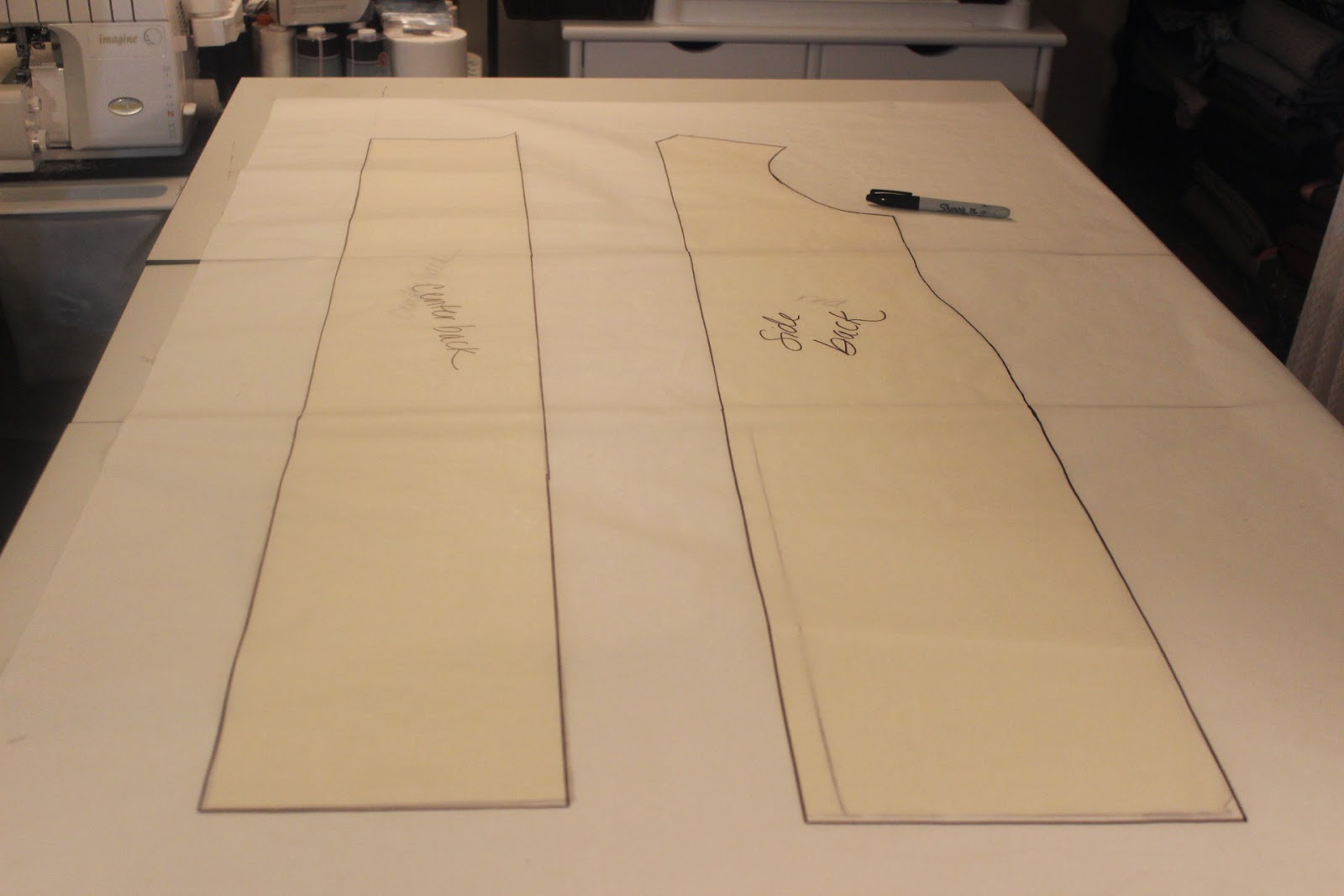 Making second copies of the back pieces 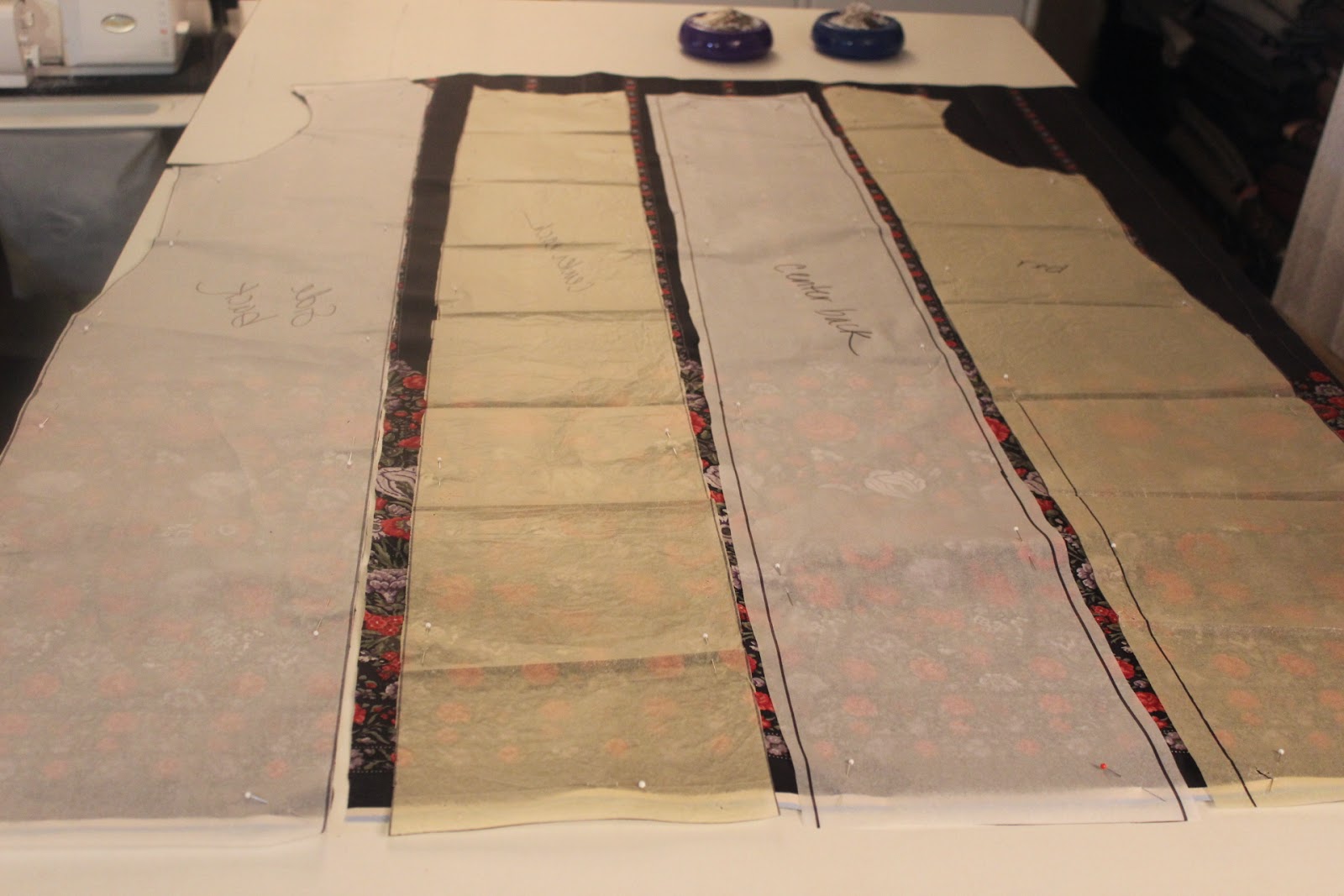 Laying the pieces out side by side on the fabric

So the front was cut on the fold and the back pieces were cut singly to insure that the border print worked all the way around the dress.

Construction ~
The only thing I did differently with this dress vs. the ponte version is to use 3/8" seams from the waistline down. The dress fit with the 5/8" seam allowances but I hate when a dress cups the bottom of my abdomen. By using 3/8" seam allowances on every seam instead of the 5/8" I gave the dress just enough space to skim over my body.

I added a red piping at the neckline because you know that I like to end/contain a print in a dress and it always adds a finishing. 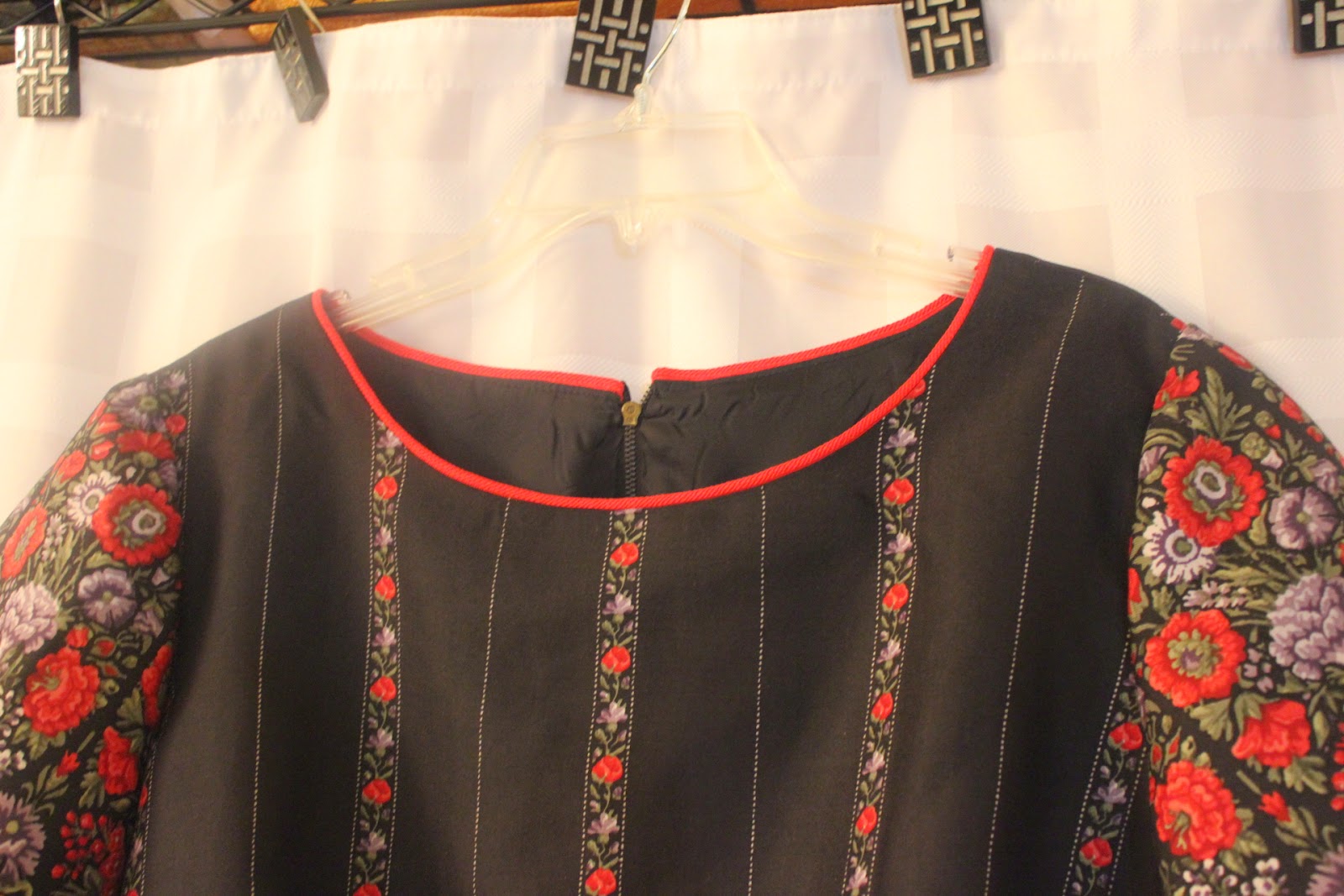 The dress is lined with a bemberg lining and closed with a regular center back zipper insertion. I was going to do an exposed zipper then decided that there was too much going on. I didn't want the zipper to overwhelm the dress. 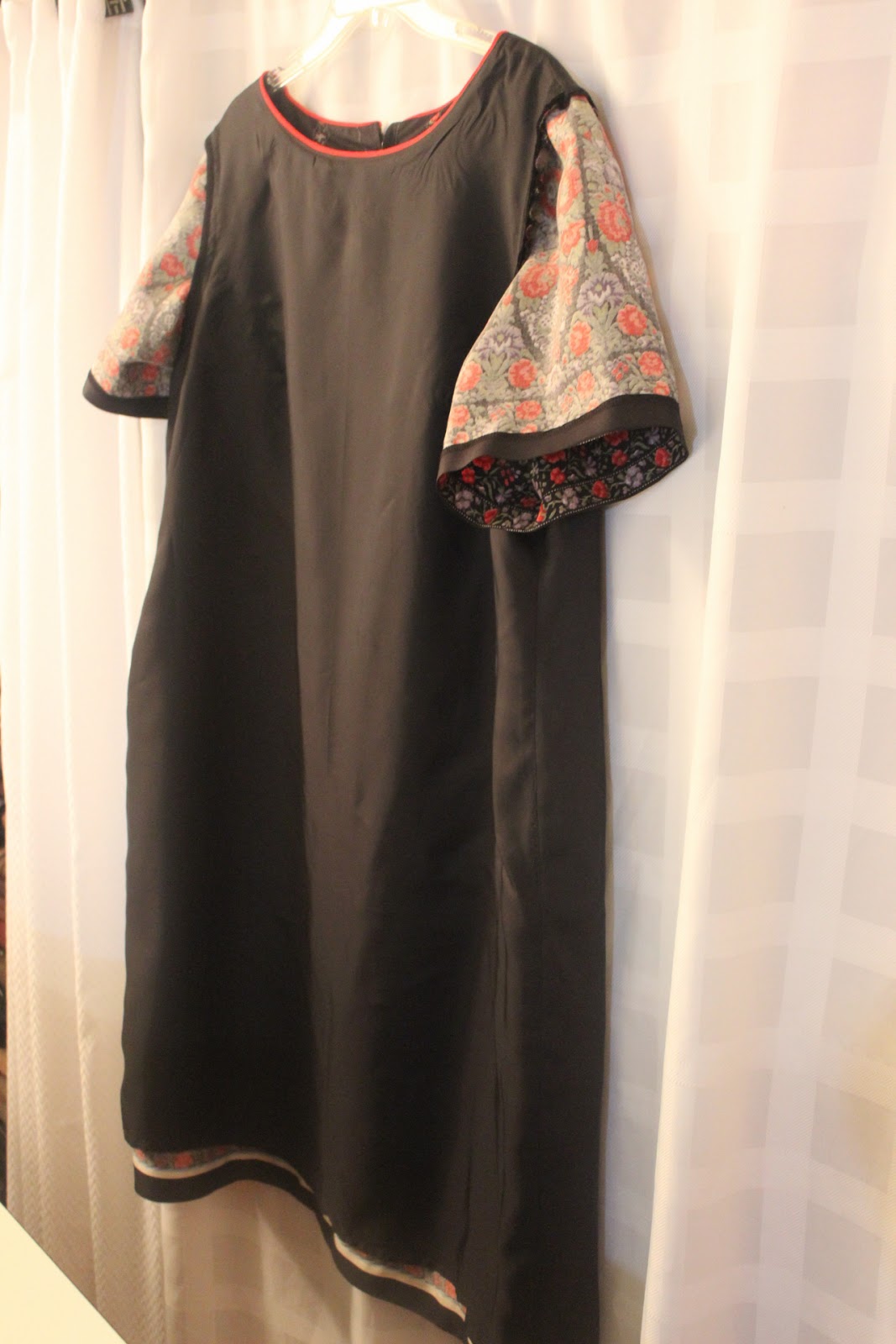 I believe that the upper back fits better here than it did on the ponte dress. 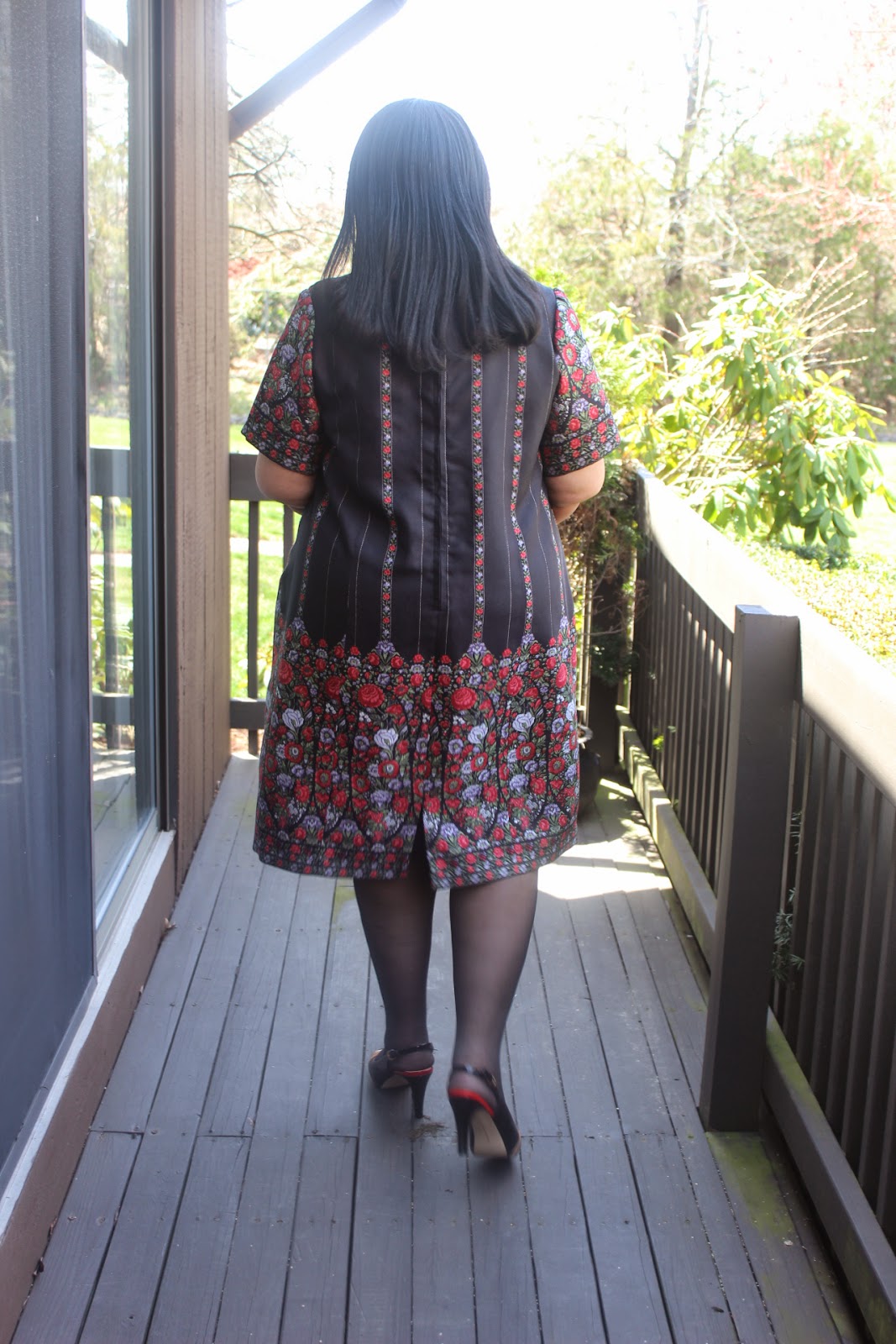 So I'm going to keep using this type of back going forward because I will make more of these dresses. It's a silhouette that I'm comfortable wearing and it works for my lifestyle. It's also a great jumping off place to make interpretations and to use as a basis for fitting new dress patterns.

My plan is to try some new dress silhouettes this year. Primarily because my sewing was so lazy last year and also because I own a lot of patterns. I should take some of them out of their envelopes and pair them with my vast fabric collection, dontcha think?! 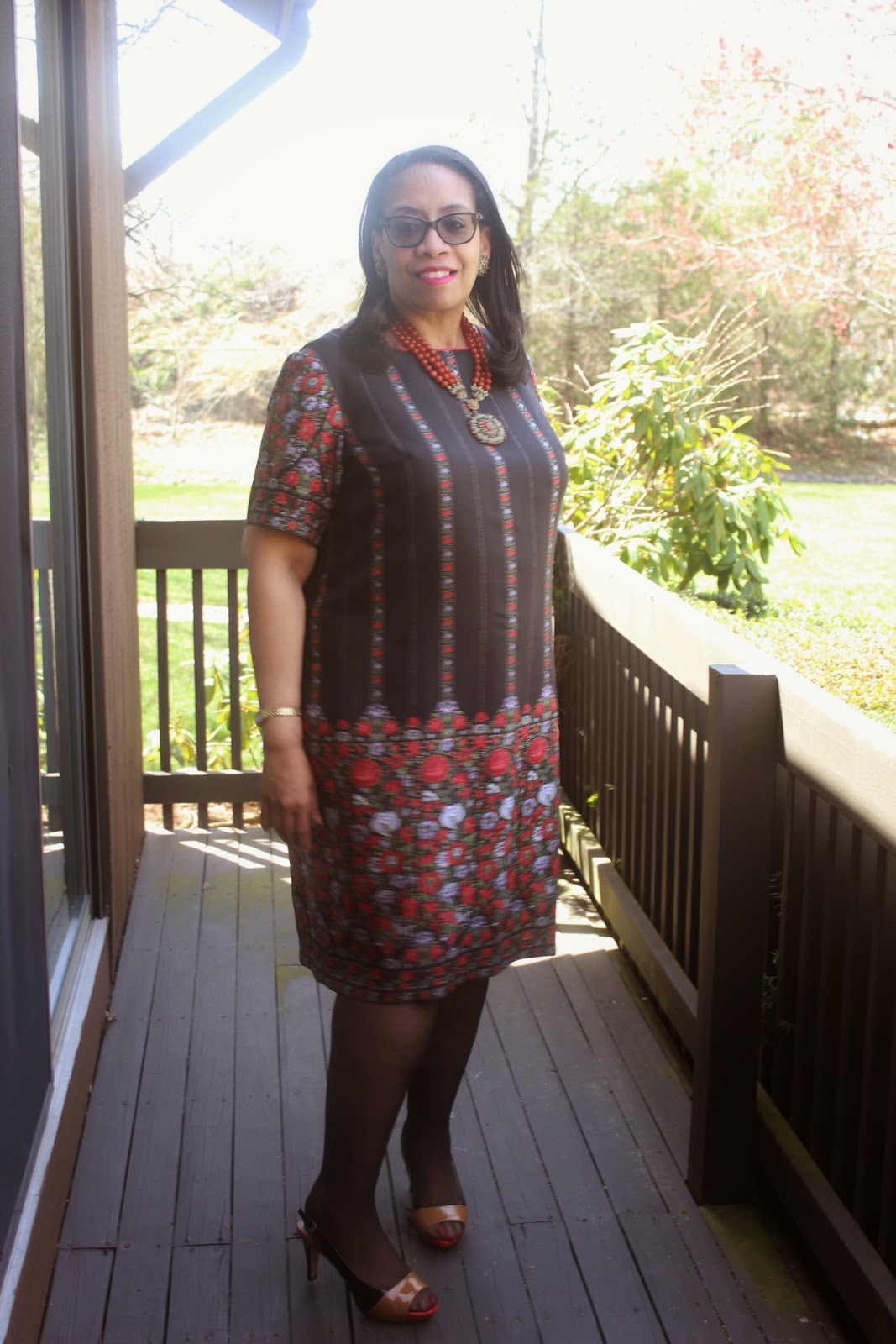 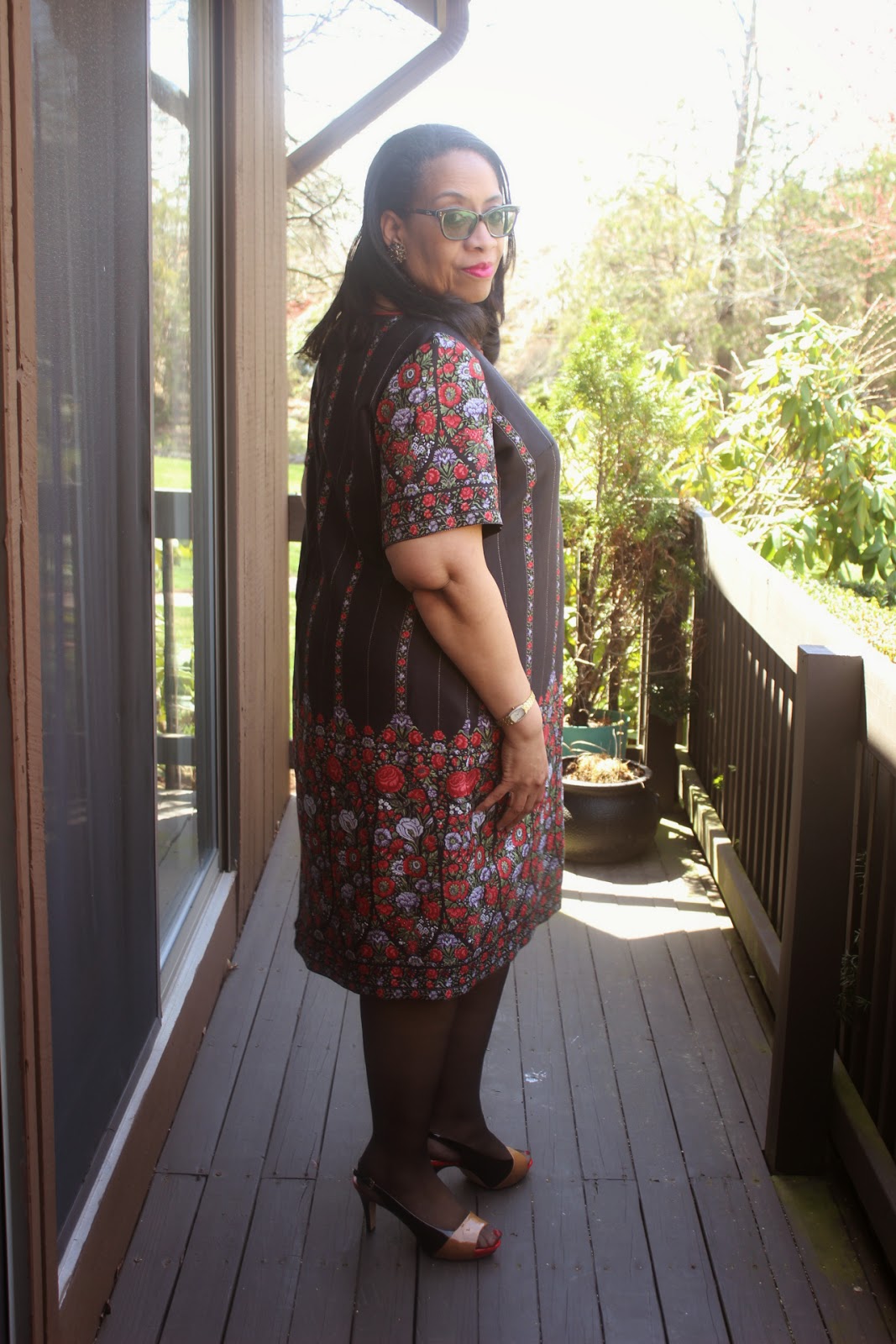 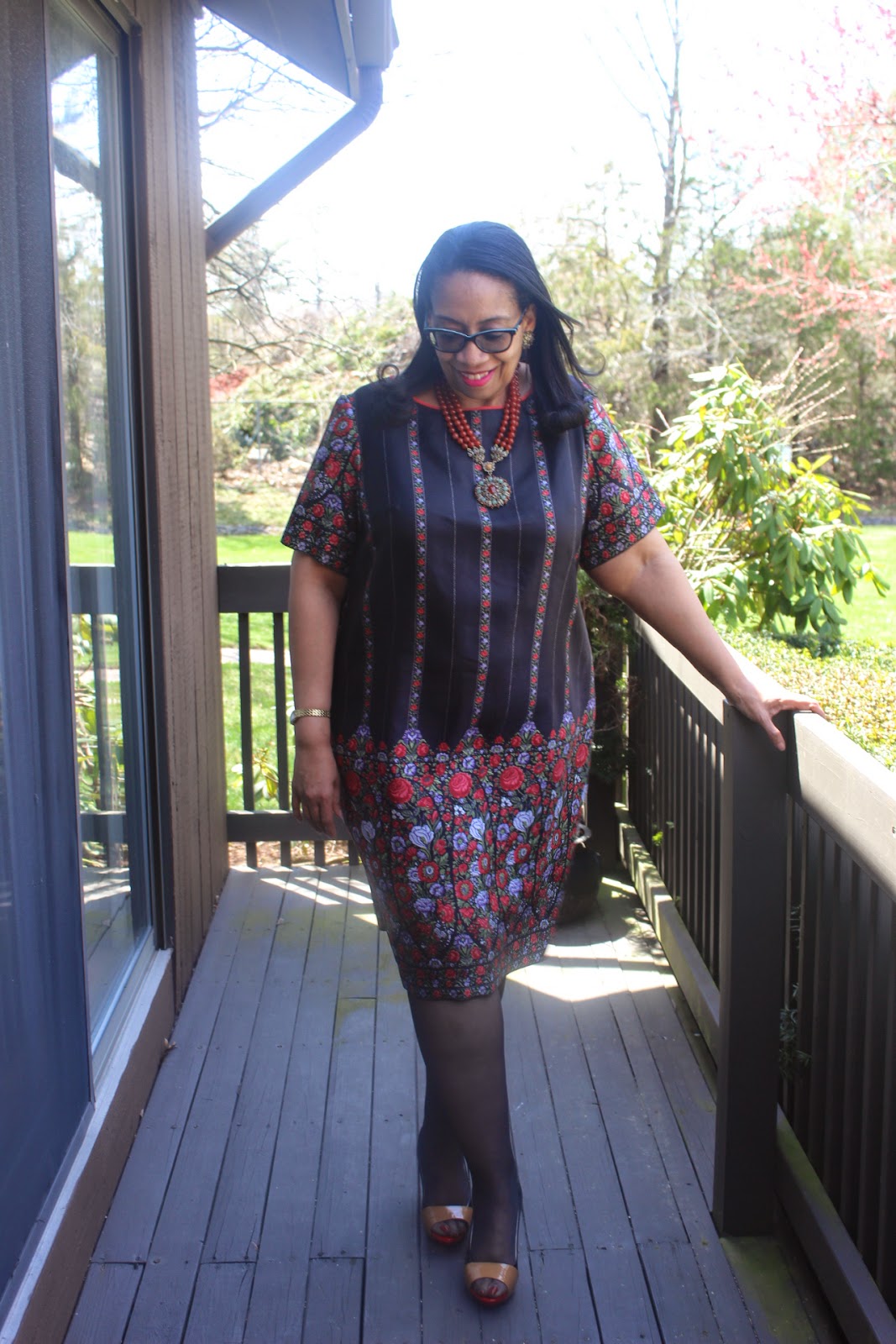 Next up I'm remaking my TNT straight skirt. I use to wear a lot of skirts. Once I got a little heavier, I would wear them occasionally but I lost the love for them. After making the brocade skirt I decided that I would like a few more in the wardrobe. Especially since almost every skirt without an elastic waist is too big for me now. I'm packing them up to be donated so a huge portion of my wardrobe is missing.

Two items are off my spring sewing list - the skirt is the third thing and then I think I'm deviating from the list!  Yes, I know...but it's for a dress and some fabric that's making me catch my breathe.  Then I'm going back to the list for the next item.

Finally a parting shot ~
I bought these shoes in 2012 and wore them for one season again because everything just bloated up on me. Now I don't seem to own a pair of shoes that doesn't fit again.  So these are back in rotation.  They are Jones NY Shoes with a 3 inch heel and a foot pad that makes them so comfortable and easy to wear. 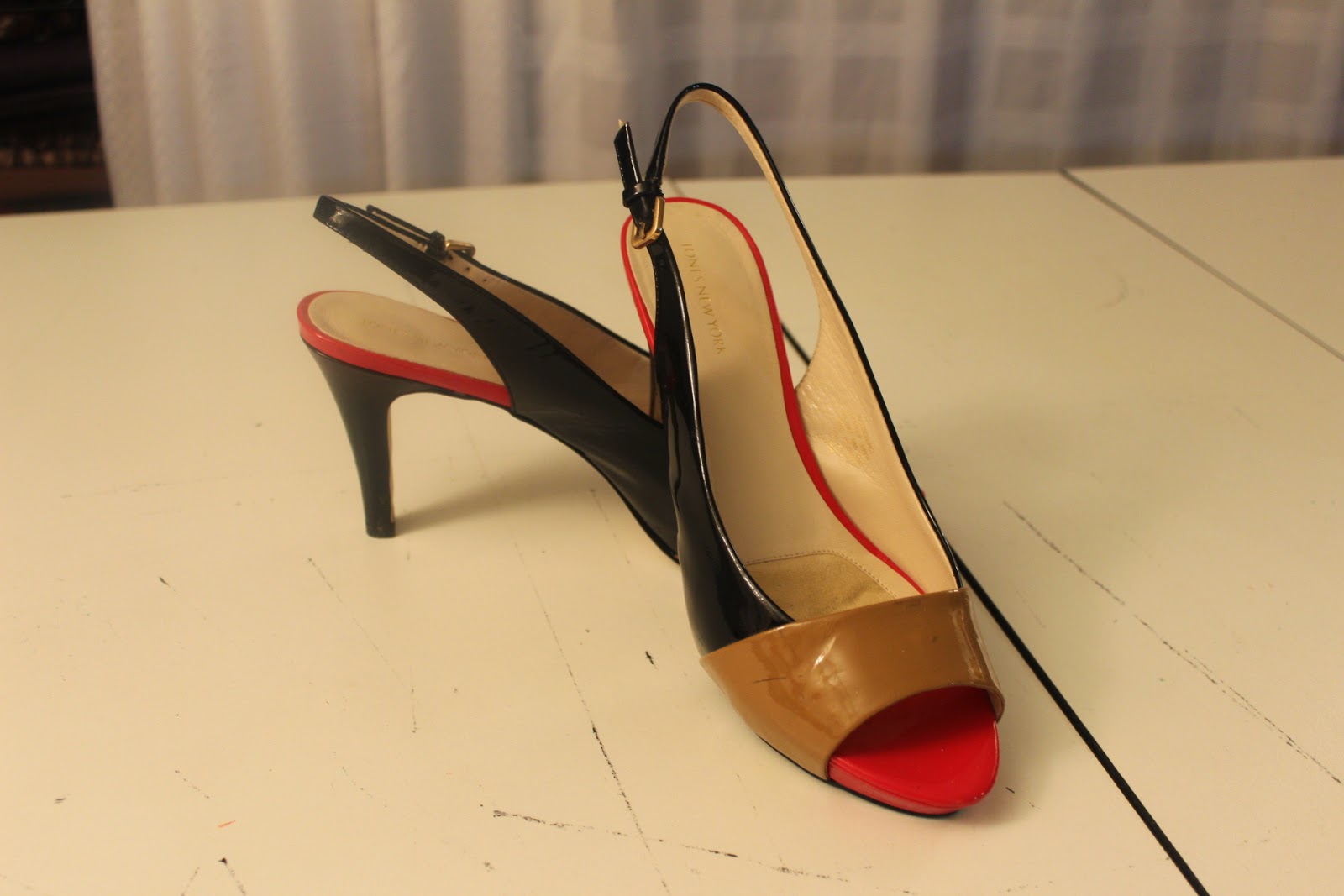