I started this dress three years ago when it was new to the pattern catalog and blogged about it here. Every spring since then I've pulled it out and looked at it and every time I've hung it back on the wall with the rest of the UFOs. There were too many ideas, too many things that I wanted to make so it hung there waiting. 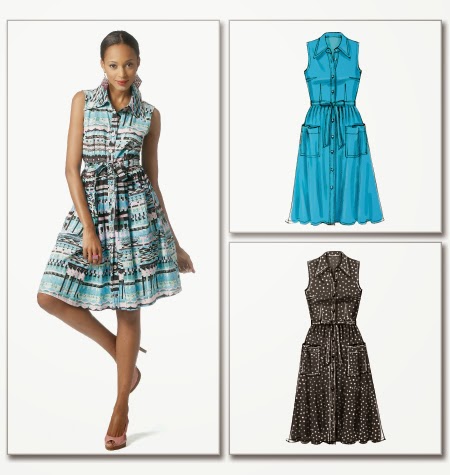 Lately I've been looking at garments differently. Most of my UFOs are fit problems that I thought I would solve later. Well later has arrived for this one because when I pulled it down last week and tried it on, I couldn't believe it fit. Gawd, at least here is one benefit to the weight loss!

Honestly there are some challenges with the bodice because if I'd cut it now I would have cut a C cup bodice because both my bustline and bra size have changed. I also would have included the waistline darts that the pattern features. However I was able to made it work.

I know that I linked to my pattern alterations in an earlier post but reviewing them now I'm thrilled with the changes I made. Lately it seems as if I've lost my mind, not remembering simple pattern alterations, because I'm so overwhelmed by fitting challenges. So it's good to know that if I just settle down hopefully all of that will come back! 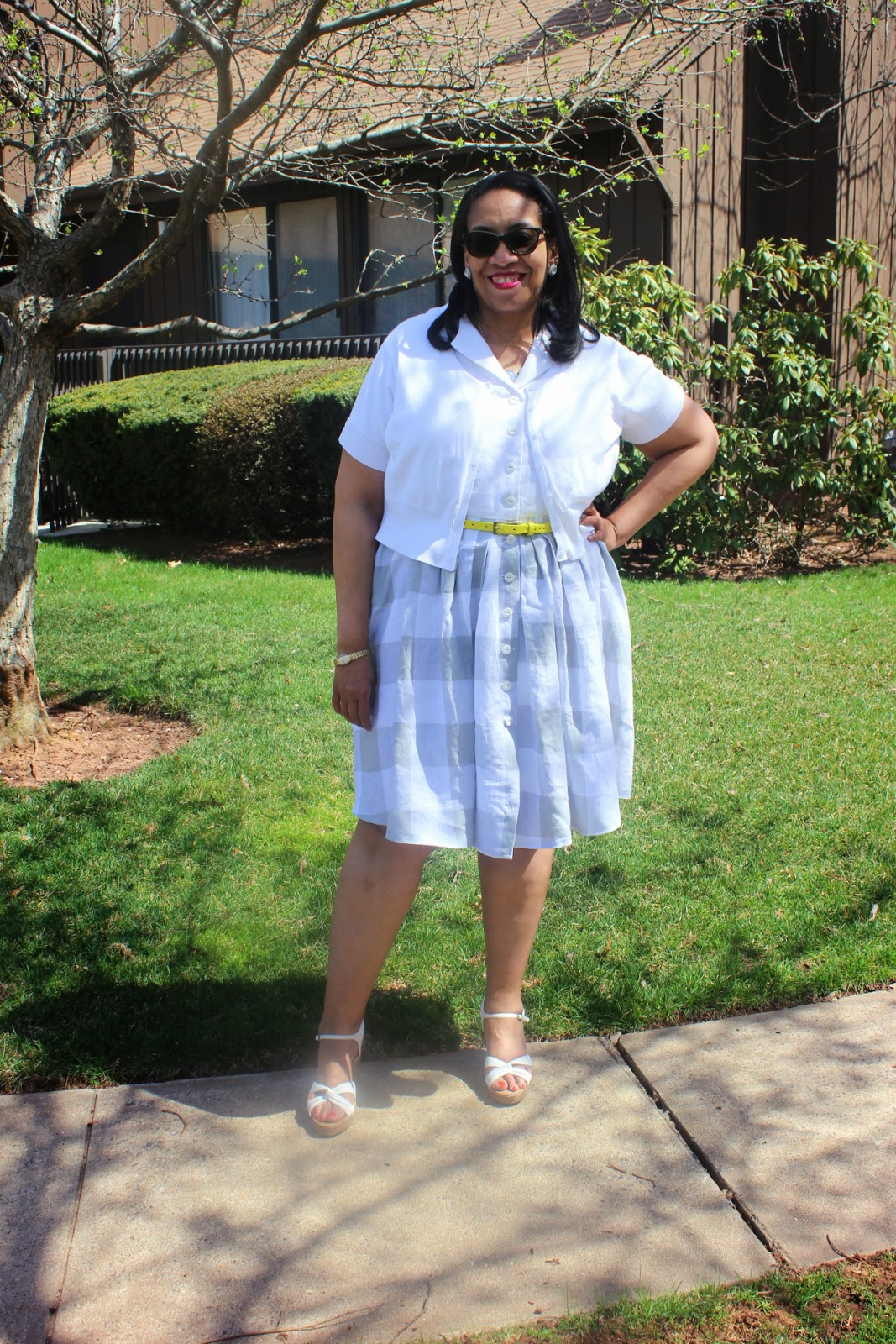 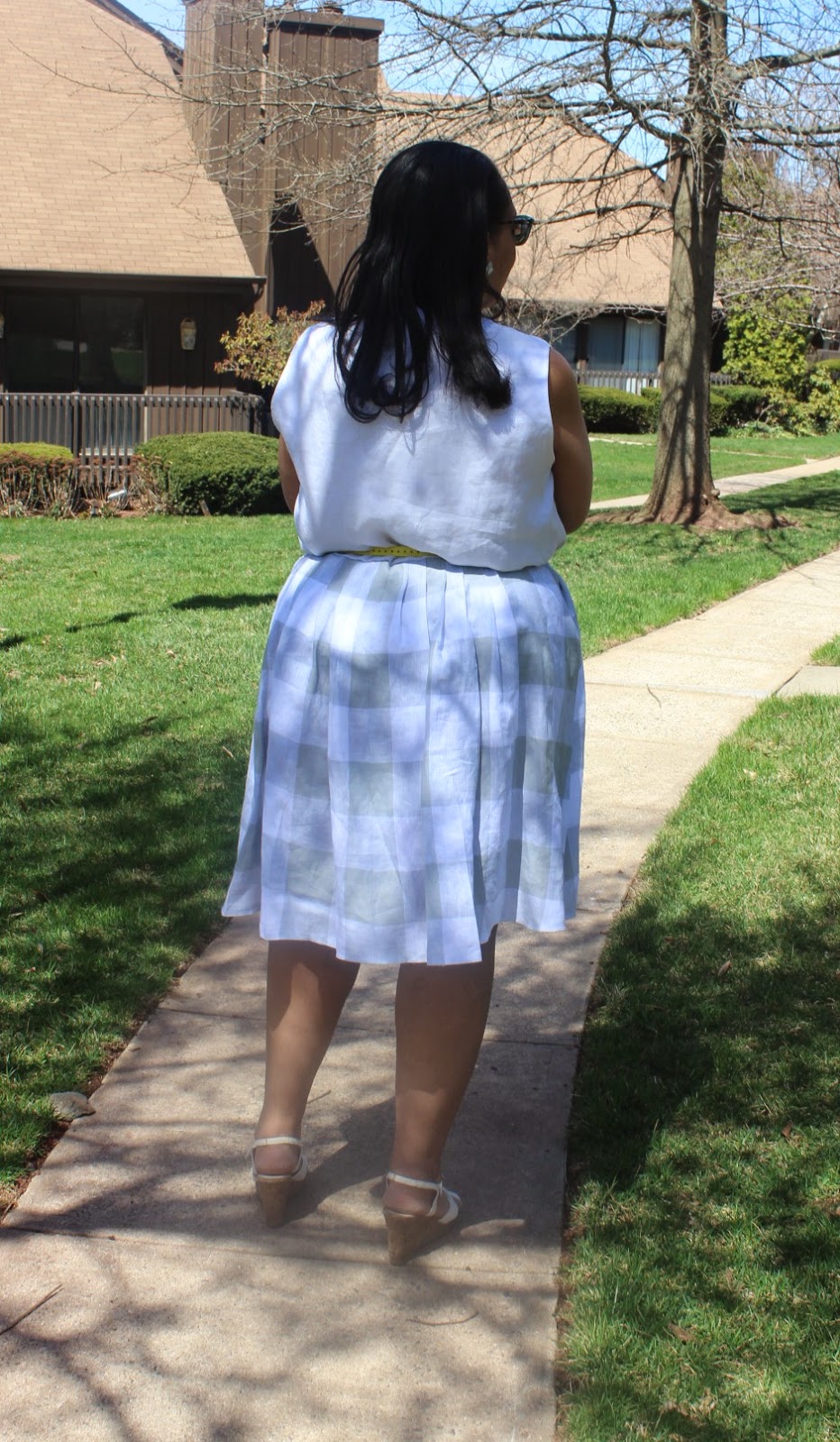 The changes I made to the pattern...

If you notice there is no collar on my version. It's not because I couldn't make the collar fit, but because when I tried the dress on again I liked it collarless.

So I drafted new facings for the dress front and omitted the front band since I was going in a different direction... 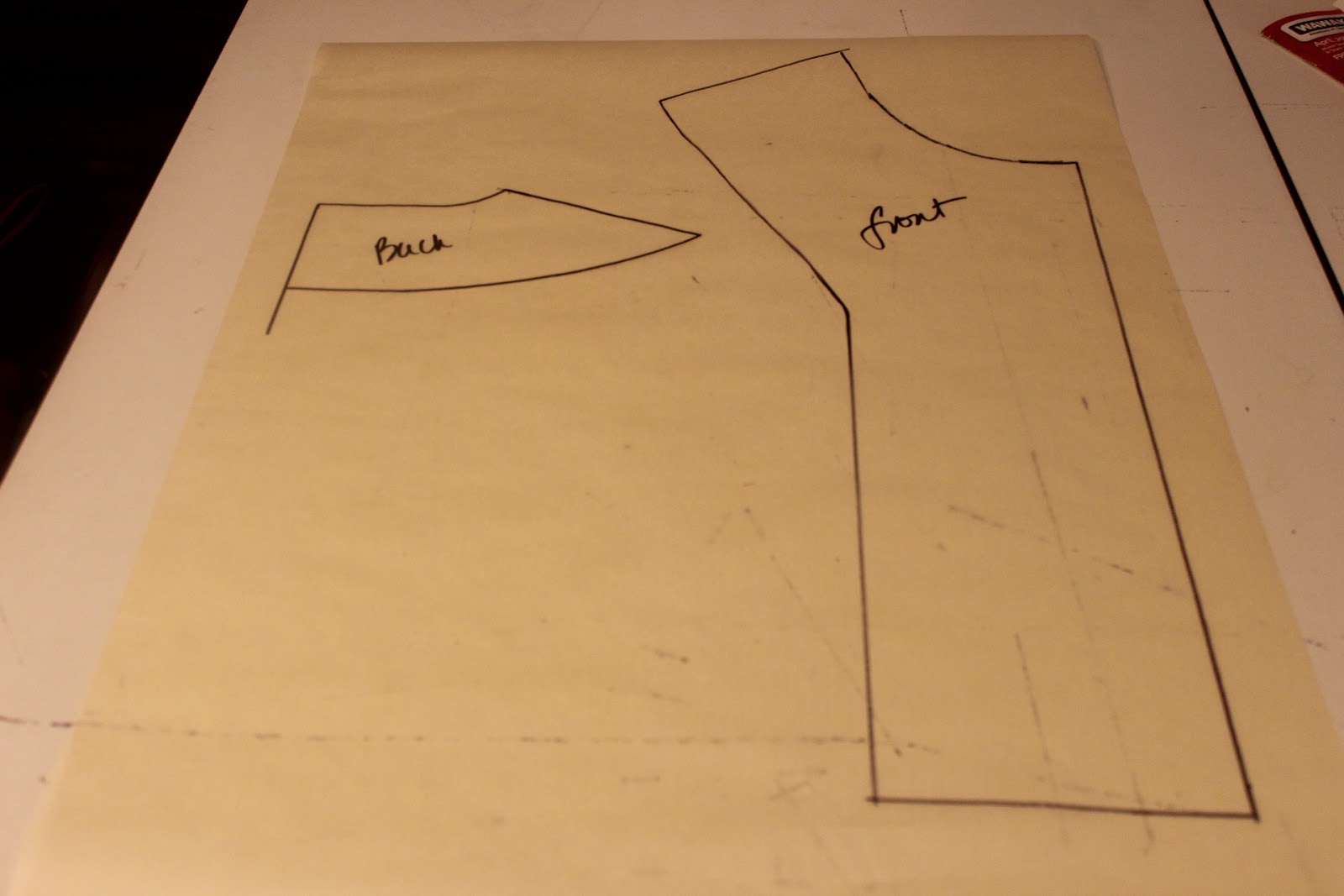 Facings for the bodice front 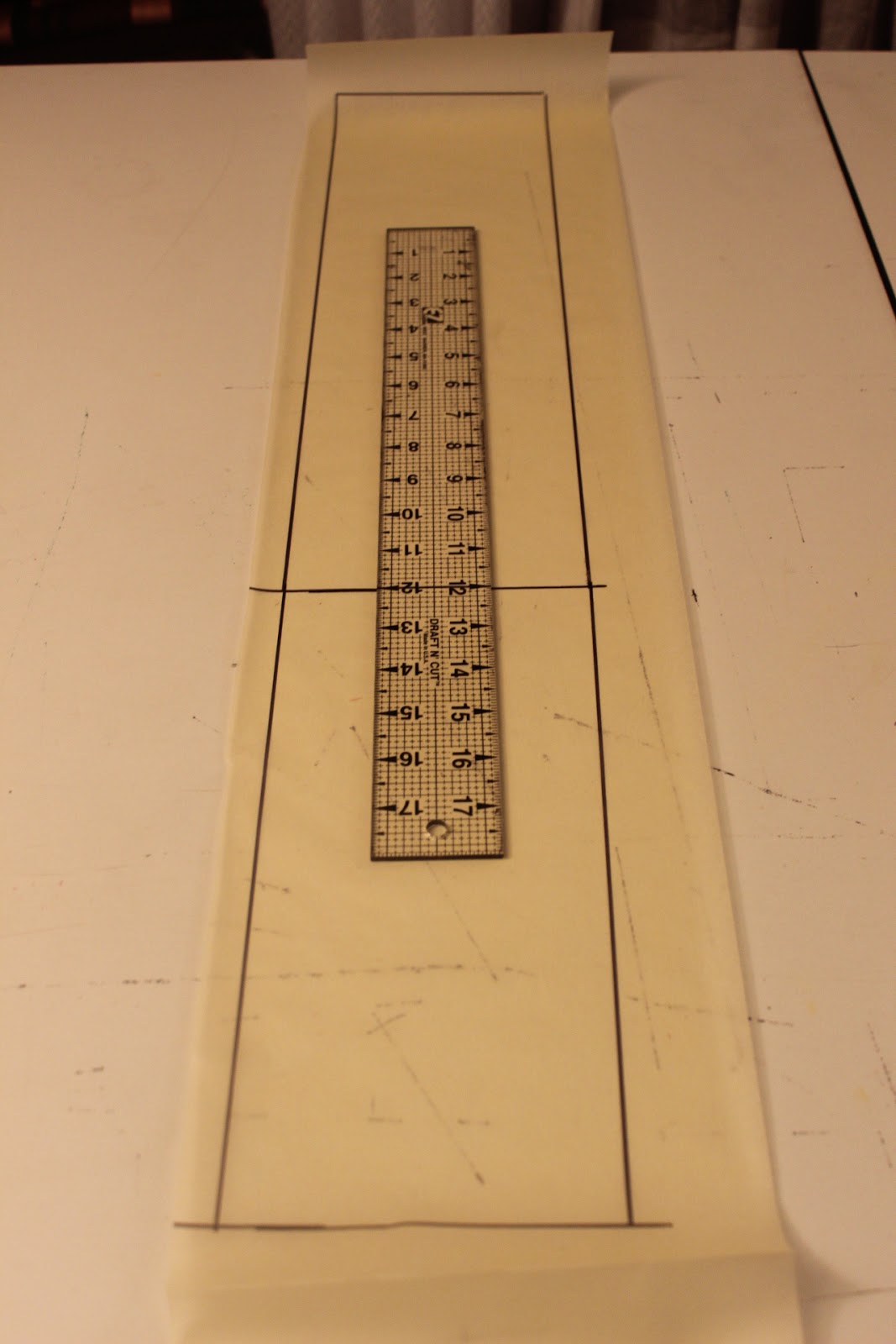 Front band facing for the skirt

Added them to the front...

Removed the pockets from the front because I wasn't feeling them and I'm really not a pocket kinda girl.

Used a store bought belt instead of the self tie belt with the pattern. 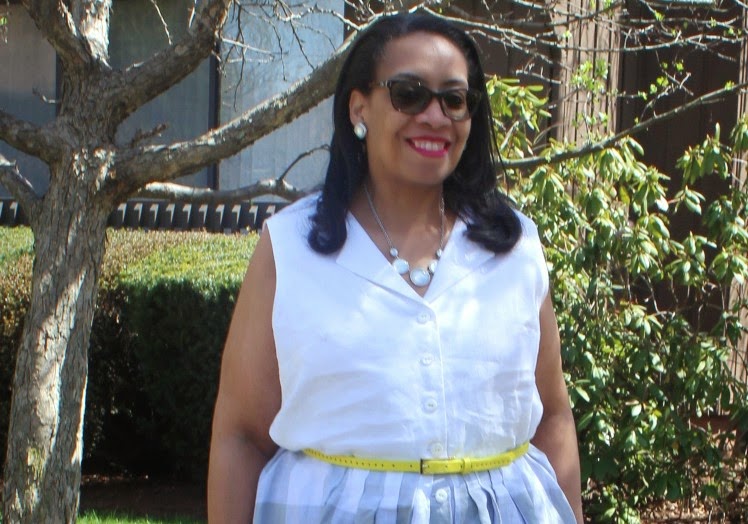 Now as excited as I was about this dress when I realized it fit, I'm as unexcited about it now. Even if I'd finished this dress exactly as the pattern describes, I wouldn't have liked it. What I became aware of is that I don't like this silhouette on me. It's probably why I have so few dresses like this.

It's interesting. People see you and think one thing or another NOT realizing that you don't see yourself that way.  AND no matter what they think, it won't change how you see yourself. I like and prefer to wear a slimmer silhouette. In my mind's eye, that's how I look best. So I will probably wear this dress, just very infrequently because it's sooooo not me!

Up next is another version of my TNT dress.  This time in a woven fabric (ltwt. wool/silk blend) using the four piece back pattern pieces to address my upper back fitting issues. 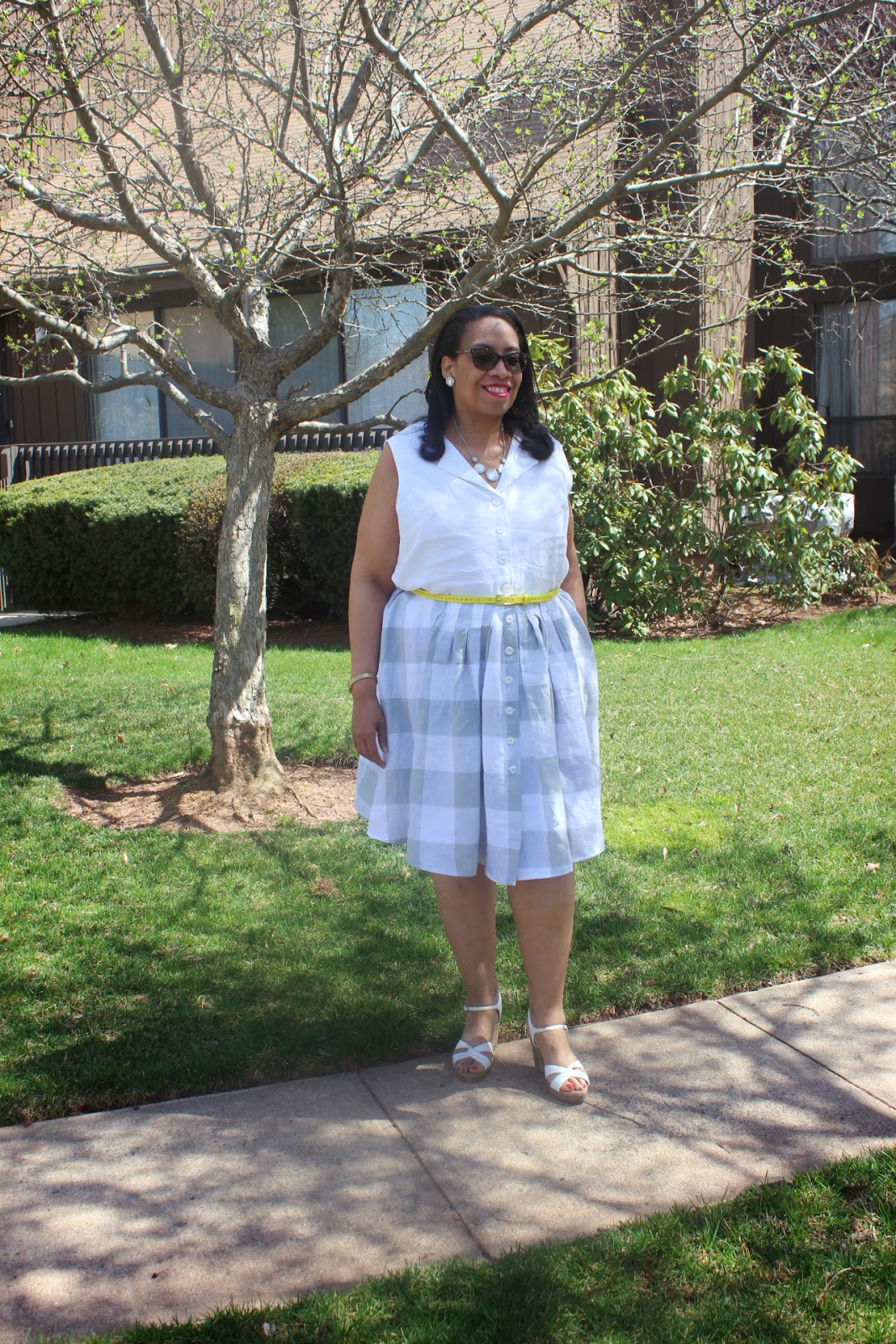 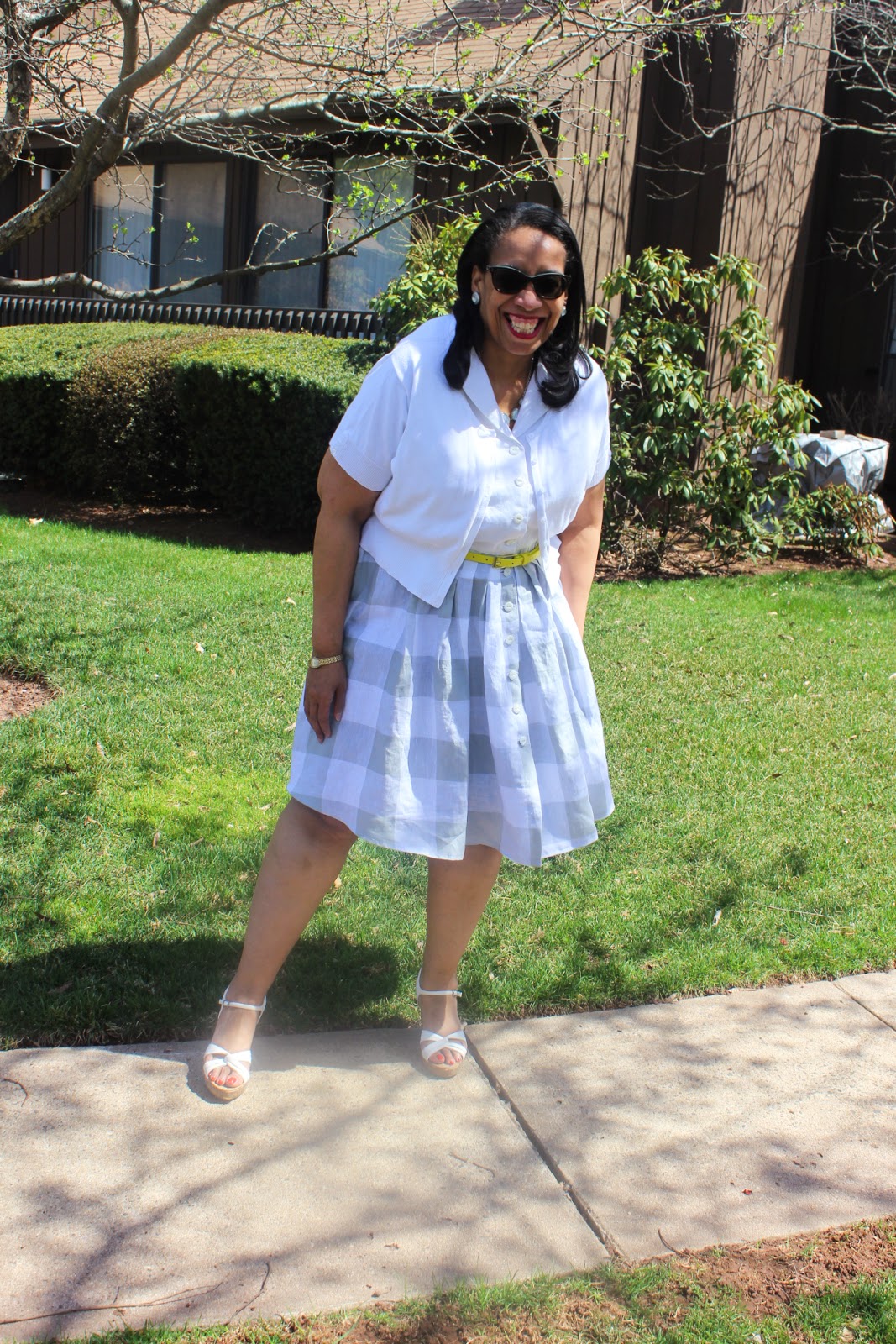