As you know my daughter has four little people living with her now.  She is a pretty thrifty shopper, scoring some amazing finds on eBay but still clothing four little people can get expensive. So I decided to give her an assist by sewing for the girls this year.

Last year I made shorts for Danny and his sister Lena was a little jealous. She is thrilled that Nana is sewing for her this year. She and her little sister will be the recipients of some Nana-made garments. I decided to start sewing for the littlest one first, using Vogue 8060. 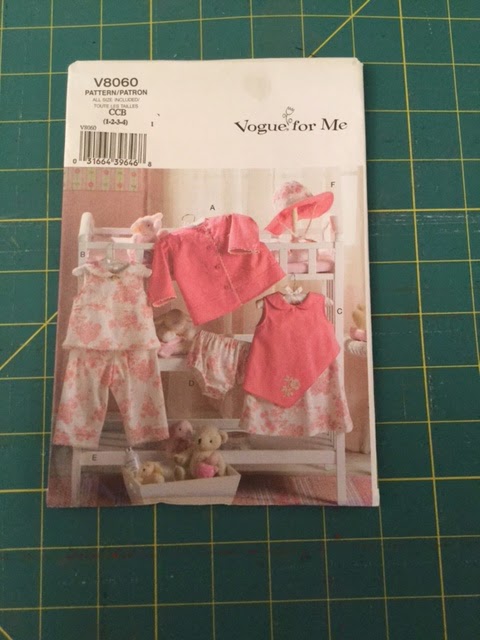 This pattern is now out of print.  It has a 2005 date on the pattern envelope and it's been in my pattern collection for a decade. I started off thinking that I would just make the dress and move onto the next lil girl's pattern that I set aside to use.

So I traced off the first size, rambled though the scrap pile and the notions stash...and then I lost my mind! Seriously, lost my mind! It was so much fun putting combinations together, using techniques like piping, inserting zippers and not worrying about FIT! I could just sew and be creative!

After we tried the first dress on Miss Sammy and determined that the length was good. I went to town.  Here are the first couple of dresses... 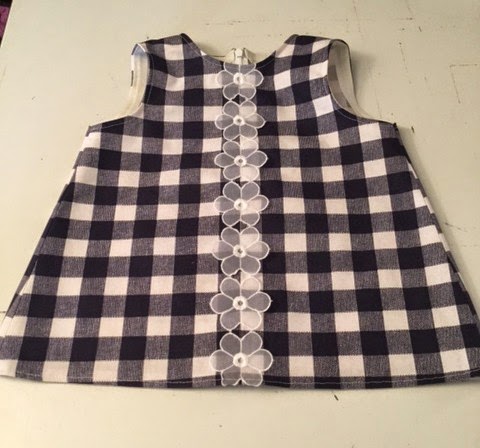 This one was made from the scraps of the skirt from the last post and not the actual remaining yardage because you know I have at least 3 yards left.  But on to the dress' details. I took way too long to make this one because I matched plaids, inserted an invisible zipper, added daisy trim to the front (purchased during The Expo) and added binding to the armholes and neckline. Hey it was the first one and I had to shed some of my more advanced sewing techniques because even little girls are harder on their clothes than grown women and I want her to wear these dresses with no worries. 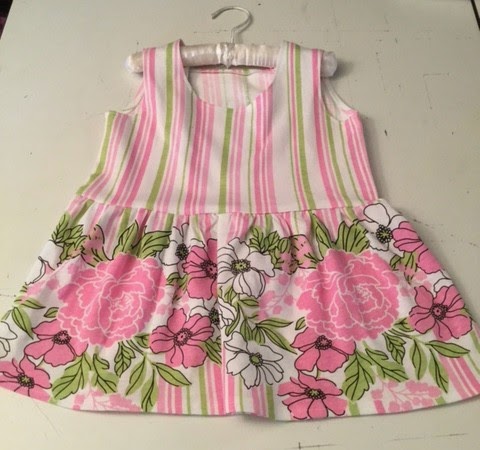 This dress is from a questionable rayon jersey I purchased from Fabric.com about four years ago. It was a border print that was more panels than a traditional border print. I could have made a series of pattern pieces for this dress but honestly she won't be this size in 3 months so why? Instead I folded the pattern pieces up and cut out the fabric. To add the skirt, I cut a band double the length of the top and the width of the border print. Then gathered the band and attached it to the bodice. The neckline and armholes are turned under and stitched. Most of this dress was made on the serger so it was a really fast sew. 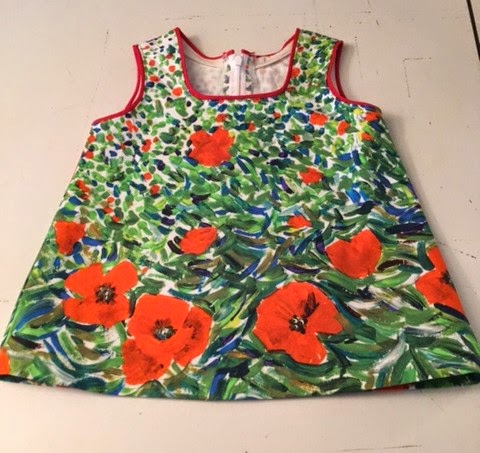 I purposely saved the scraps from my Milly dress to make a little dress for a granddaughter.  Of course I added piping and an invisible zipper to the dress. Also, the pieces are underlined with cotton batiste because the cotton is really light. I'm thrilled that I was able to get a dress out of this for Miss Sammy! 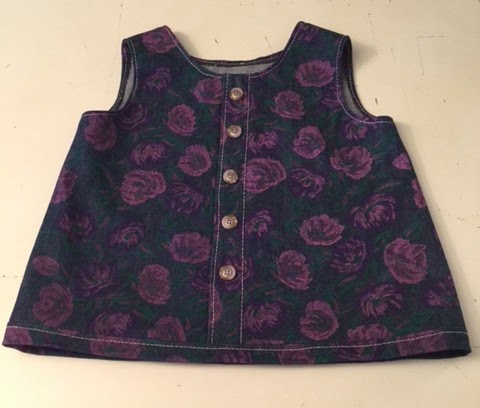 This one is made from a lavender floral denim that I recently purchased from Fabric Mart to make pieces for the granddaughters.  I added a lavender & metal button from the button stash and lots of topstitching in lavender to make this cute little jumper. The front and back necklines are lowered so that it will slip over her head. The front band was made by cutting the fronts into two pieces and folding, pressing and topstitching. I also added a 2" band on the bottom of the dress that was attached and topstitched down. As of now this is my favorite one! 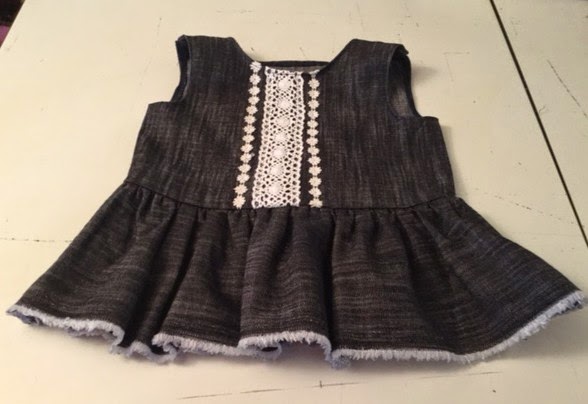 This dress was inspired by a piece of clothing I saw online at one of the RTW sites. After a quick trip through the notions stash I found some trims to make the center embellishment. The skirt is four times the size of the dress front and gathered using clear elastic. The hem is the selvedge of the denim. The dress has button/buttonhole closures on the shoulders. This is the same pattern piece from the original dress just folded at the waistline and side seams to make a straighter top. 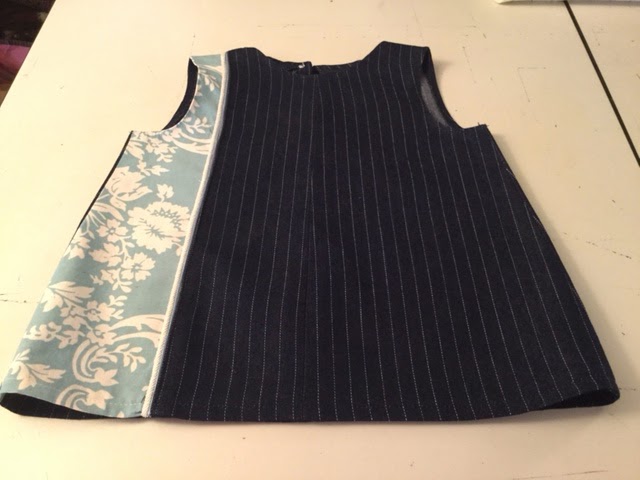 This dress is inspired by a series of dresses I pinned on Pinterest. I added two pieces of piping to the dress ~ a white piping and a thinner metallic blue piping. The base of the dress is a pinstripe denim from Fabric Mart and the insert is one of the scraps of quilting cotton gifted to me by Oona for the #fatquarterchallenge. It has a loop & button closure on the back and again the pattern adjustments were made by folding the main pattern piece. 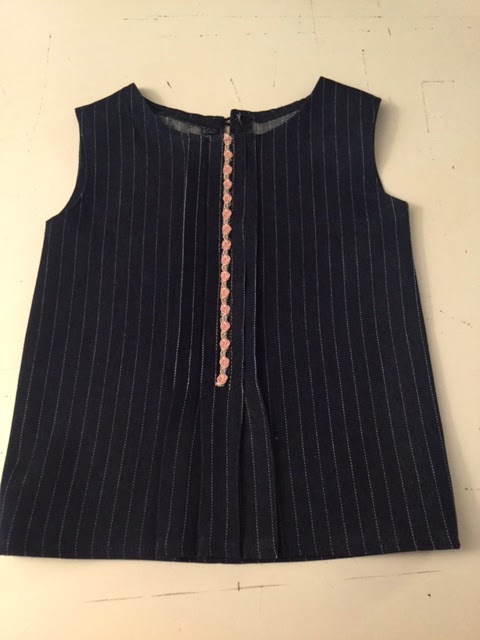 This is a slimmer version of the dress and how the next set of dresses I'm making will look.  I pulled the front piece about 4" from the fold and used the pinstripes to make the tucks in the front.  A piece of floral ribbon was added to the center of the tucks. 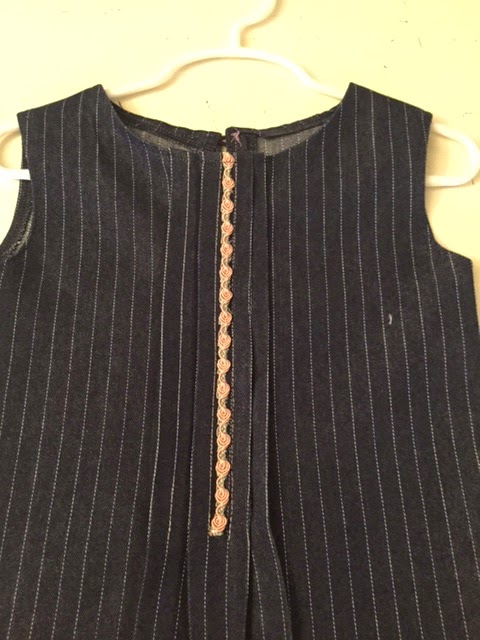 It also has a button & loop closure in the back and the pleats are only sewn 3/4rds of the way down the front of the dress. The tucks are pressed and then release out. This is probably the plainest version of the dresses. 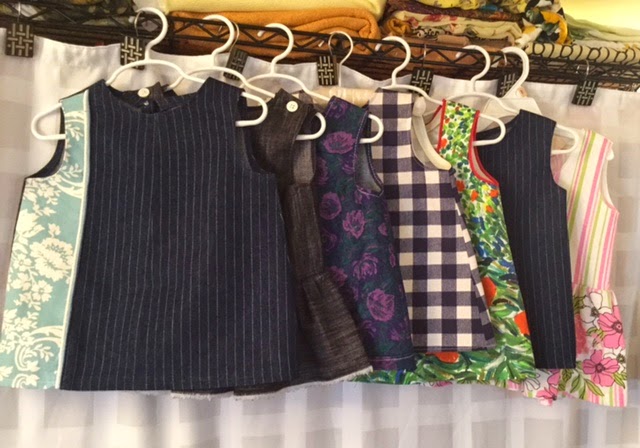 I'm going to make about 5 more dresses before I start on Miss Lena's outfits. She is four years old and has requested a maxidress or two! Really!?! A baby fashionista in the making! *LOL*

I will share a few modeled shots of the girls when I'm completely done and there will probably be another post or two about the garments construction. If you're not interested in children's clothing, I understand if you ignore the next couple of posts.

When I come out of little girl land, I will be working on the Vogue 9079 dress.

Posted by Carolyn (Diary of a Sewing Fanatic) at 11:33 PM