2007 has been a very good sewing year for me. I have added to and shared from my fabric collection...I have made some new sewing friendships...and I have challenged myself to sew more "quality" garments.
At the beginning of the year, I set a goal to make 100 garments in 2007. I abandoned that goal quite early in the year instead opting for quality sewing...making garments that had the best sewing techniques in them that I could do!
After reviewing the year, I believe that I did accomplish some amazing sewing feats...and if I had to use two phrases to describe my sewing in 2007, the phrases would be "TNT Patterns" and "Adaptability."
TNT Patterns - (tried and true)
I have worked the heck out of my TNT patterns this year. No pattern classification was exempt ~ from tops to dresses to pants and skirts, they all made an appearance in 2007. Some of the patterns were used to expand my wardrobe and some were adapted to become something new.
Adaptability
I believe that I have grown in my ability to change one of my TNT Patterns, turning it into something totally different from the original. This year has seen me move from one plateau to another when adapting a look from a picture into an actual garment. I want to use this "talent" even more in 2008, though it figured prominently in my top five garments for 2007!
Without further ado, here is the listing of my top five garments in 2007:
1. The "Corporate Chic" Wardrobe
from the 2007 Timmel SWAP
This wardrobe was completed totally from scratch. I planned, sewed and entered an eleven piece collection in the Timmel SWAP. Even though my collection did not win any of the prizes, it did accomplish its main purpose and that was to elevate the level of my work wardrobe. This collection was finished early in April and there weren't too many days left to wear it since it was a fall/winter wardrobe. However, it has played a prominent part in this Fall's wardrobe making me appropriately dressed in all of my work situations. 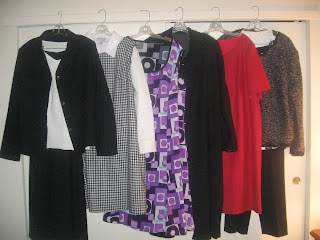 2. Brown Eyelet Dress & Jacket
(completed items 20 & 21)
I made this outfit during my Spring Sewing Vacay. It makes my 2007 best of list because it is a totally trendy outfit that was made in time to actually wear during the trend! *LOL* I also used a "classical" slant when constructing it so that it would work well beyond the trendy curve. The other thing that I love about this outfit is the well thought out embellishments, the fit of the dress and jacket and how easy the outfit wears! 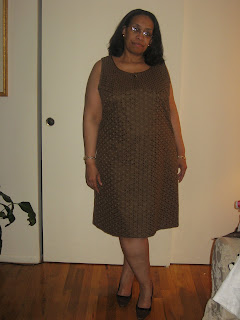 3. The Chanel Knock-off Dress
(completed item 25)
I know that a few other sewists have reached that "I really know that I can sew" plateau this year! They constructed a garment that just stretched their talent and abilities to the limit...that was the Chanel dress for me! Even now I am astonished that I was able to take a couple of pictures from People Magazine and turn what I saw into a wearable, well-fitted garment! That three day exercise reinforced and solidified my talent to me! Now five months later, I can't wait for spring to come so that I can wear the dress again! 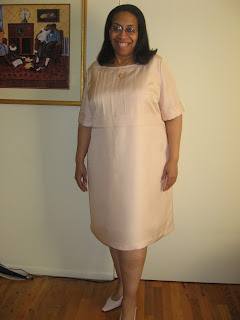 4. Jackie O Retro Suit
(completed items 34 & 35)
Sometimes I think I invested as much time in this suit as I did in my SWAP collection! It was a concept that I lived with for several months before it came to fruition. I used techniques that I had never tried before ~ quilting the lining ala Chanel ~ some interesting bias and grain treatments for the skirt ~ and once more adapting a picture into a finished garment. The other thrilling aspect of this garment that wasn't thought of at all during the planning phrase, was how much it inspired other sewists! This suit cemented my workday transformation and I'm so thrilled with it and everything I learned during the construction process! 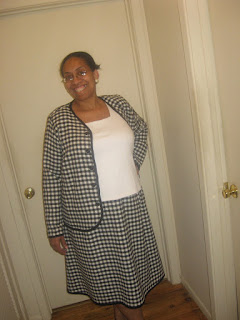 5. The Coldwater Creek Inspired Suit
(completed items 40 & 42)
There are two things that I love about this suit...one is that it uses the exact same jacket pattern as the one used in the Jackie O Retro suit. However, each jacket is totally different from the other! The second thing that I love is the subtle use of trim in this jacket. I am a total embellishment girl. I love adding trim to things and the use of the large gold braid and the buttons on this jacket totally makes the suit for me. Add to it my TNT 4-gore skirt and again I am not dialing up the same ole, same ole corporate black suit...yet, I am just as polished and professional looking as my peers. This suit is part of a wardrobe which needs a few more pieces to be completed but it is probably the last "quality" piece that I will work on in 2007! 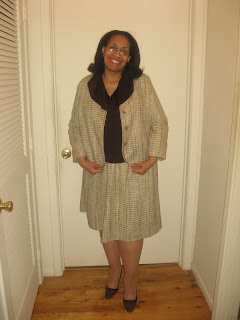 Now of the 48 garments that I have made this year, these are not the only stand-out pieces. However, I think these pieces symbolize the direction that my sewing is moving in and how much I've grown. Upon reviewing the sewn garments for this year, it is causing me to set different sewing goals for 2008...but overall, I am very pleased with my 2007 output...and believe that I accomplished my primary goal ~ to produce quality sewn garments this year!
So how about you? What did you learn sewingwise in 2007? What technique that you learned or garment that you constructed in 2007 are you most proud of? Most importantly though, did you enjoy your sewing journeys this year?
Because I certainly did!
Posted by Carolyn (Diary of a Sewing Fanatic) at 8:16 PM