I am a huge proponent of supporting the sewing magazines that are published because whether we sewists are aware of it or not, we are considered a niche market...meaning that the general public doesn't go out looking to buy a sewing magazine. Our magazines are not bought in the numbers that general magazines like People, Time, Newsweek or even the fashion magazines are purchased. So anytime I can highlight and support a wonderful issue of a sewing publication I will... 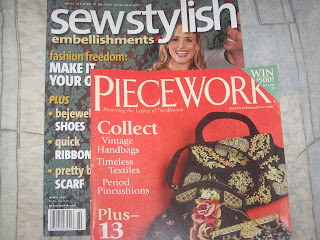 First up:
Sew Stylish's Embellishment Issue - Winter 2007
Of course if you've been sewing awhile some of these techniques aren't new to you, but I am championing and will continue to champion this magazine because of the collection of information it provides to new sewists and those returning to sewing. I believe that it is very kewl to have one focal point to go to as a reference source. Besides the wonderful embellishment techniques featured in this issue there are two other things I want to point out:
1. In Amber Eden's, the editor of Threads, welcome message she outlines the upcoming issues of Sew Stylish for next year! So hip hip hooray, this wonderful magazine is going to quarterly issues and NOT disappearing! The issues for 2008 will be:
*Quick Stuff to Sew in February 2008
*Spring Fashion in April 2008
*Accessories in June 2008
*Fall Fashion in August 2008
2. In Amber's p.s., she states that all of the fabric in the issue came from Metro Textiles! This is a fantabolious shout out to a wonderful fabric resource and a very kewl gentleman!
The other "craft" magazine is called "Piecework." I became aware of this magazine because of a blog post that Liana wrote. There is also a conversation taking place on Stitchers Guild right now about the article. Claire Schaeffer writes about how to spot a fake Chanel which is especially pertinent to our sewing community since several sewists have just recently completed their versions of Chanel-type jackets. There are also two other articles in this magazine that caught my attention, one about repairing a damaged crochet tablecloth and the other about collecting vintage sewing tools! 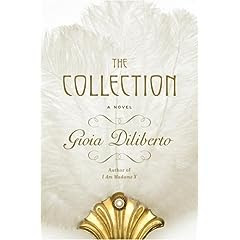 Finally the book, "The Collection" has landed in my mailbox. I have wanted to read this book since reviews started showing up in sewing blogland. Now it's in my hot little hands! I will read it right after I finish up "The Memory Keeper's Daughter" by Kim Edwards which I am really enjoying and highly recommend. Once, I've read it I will review it here and work on getting it passed onto someone else.
Sooooo, if you are interested in Chanel jacket construction or if you want to learn and/or review embellishment techniques, I hope you will pick up one or both of these magazines! Good sales of a sewing publication is a good thing for the rest of us sewists!
Enjoy your sewing journeys!
Posted by Carolyn (Diary of a Sewing Fanatic) at 9:02 PM