The History of a Pattern

So I requested two of the patterns offered by Cennetta. The first one, Vogue 7940, arrived in Monday's mail. As expected, the instruction sheet was chockful of directions ~ even complete step by step instructions on how to make bound buttonholes. That double-sided sheet of paper was a virtual instruction manual, so unlike the instruction sheets that are in today's patterns.
Due to the Christmas Eve festivities at my apartment, I only got around to pulling the instruction sheet out later that night. It was my reading material as I drifted off to sleep. Yesterday morning as I was getting out of bed, I noticed a brown slip of paper on the floor near the pattern file. 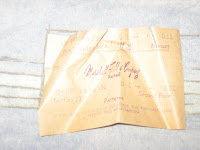 When I picked it up I found this ~ it's the actual receipt for the pattern...which was purchased at Marshall Field & Co. on April 4, 1953. The receipt details the floor, the department, the register number and of course the cost of the pattern including tax - a grand 61 cents!
If the pattern was interesting before, it now became a gem! But even more than that it got me to wondering about its journey from Marshall Field's in Chicago to Somerset, New Jersey. See this pattern was purchased in Chicago, six years before I was even born. My mom was only 12! The pattern was cut out and it appears to have been used...so I wonder what the owner made from it!
Now 54 years later it is in NJ in my hot little hands and I am curious about its sojourn from a sewist in another generation and time to a sewist in the 21st Century. I now have to make a garment from this pattern...somehow it only seems fitting to close the sewing circle!
Posted by Carolyn (Diary of a Sewing Fanatic) at 6:46 PM