The Jacket is Finally Finished!!!

Yes, it is finally finished to my satisfaction and was worn to work today...
The suit stood out like a beacon in a sea of blackness...yeah, most of the women in my office wore black pantsuits today and there I stood in a seagreen jacket, coordinating seagreen striped tank top and vanilla lined tencil pants. I looked "pretty"...hopefully pretty and professional!!!
I am going to describe the construction of this jacket in a series of posts. Mainly because there was just so much that went into turning my TNT jacket pattern into a version of the Vintage Vogue pattern, that it's too much information for one post. This was one of my most ambitious interpretations but I think the final jacket and tank were worth the effort!
The vanilla skirt still needs to be constructed. As noted above, I wore it as a pantsuit today because I really wanted to wear this spring-like outfit on a dreary and dank day that is suppose to be a spring day but definitely wasn't!
However, today's post is going to be about the buttons and snaps! Might as well start at the end and work towards the beginning since this was the last thing on the jacket. *LOL* Actually, I am starting here because I haven't made a covered snap in over 20 years, so I had to relearn a technique! 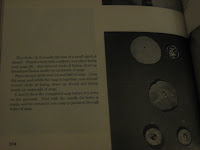 Because of the faux welt pockets on the jacket front, I decided not to make buttonholes exactly like the vintage jacket. Originally I was going to add covered buttons from the jacket fabric with covered snaps as closures. Working towards that goal, I found instructions for making the covered snaps in one of my Bishop books, "Fashion Sewing by the Bishop Method."
Of course, the first one I made was very rough. By the third set I had a rhythm down and they were passable enough to put on the jacket. However, I now need to make another jacket where I can use covered snaps so that I can improve this technique. 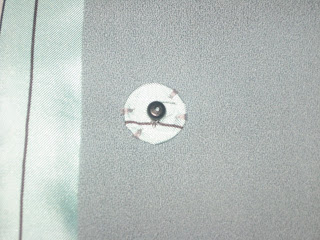 The instructions for making the covered snaps were really simple:

And a hint or two:
1. Use a straight pin to find the holes on the snaps to stitch through...it was a lot easier than stabbing the needle around looking for them.
2. I also used a double waxed thread in the needle so that I didn't have to stitch through the snaps so many times.
It is a simple technique that with a little practice gives a garment a really upscale finish. I will use this technique again soon!
The final change was regarding my button choice. As I was searching for my covered button forms, I found these amazing gold & flower buttons in my button collection. They gave the jacket a more vintagey flair so I used them instead of the covered buttons. It was like adding jewelry to the jacket and I'm glad that I went with them instead of the covered buttons...plus they hid a lot of the bad hand stitching that was used to stitch the snaps onto the jacket. 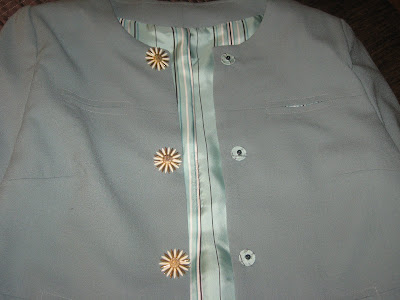 It was the last thing added to the jacket but it gave the jacket a wonderful WOW factor!!! More later on the pattern alterations and making the faux welt pockets!
Posted by Carolyn (Diary of a Sewing Fanatic) at 9:09 PM