12 on a Desert Island

Yesterday Lisa of Sew Random wrote this really kewl and fun post with these specifics:
Okay this is right up my alley! I use TNT's all the time. Most of my wardrobe is just a series of TNT patterns rearranged and made over and over again. So I happily sat down last night to write out my list and to my surprise I only have 10 TNTs that I would take with me! Egads! You mean I have so little sewing imagination that I use the same 10 patterns repeatedly! Excuse me but that is truly a heavy revy!!!!
So here are the TEN patterns I would take with me!
1. SW Mission Tank 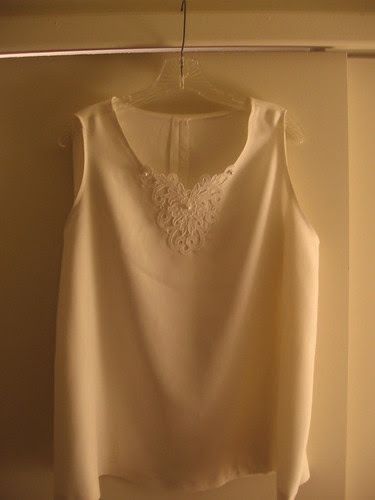 This is a workhorse in my wardrobe. I have been making this little tank top for the last 4 or 5 years and have made it out of every fabrication possible, linen, silk, wool w/lycra blend, cotton. It works so well with my corporate wardrobe and makes up quickly now that I've gotten the pattern fitted. A couple of weeks ago, I even made it out of a knit and added a bowtie to it...yeah, this one is definitely coming with me!

2. TNT Straight Skirt Pattern
I have worked with this pattern in several sizes and have transferred it to pattern paper after pattern paper when I've worn it out. I have altered my pattern from a smaller size to a larger size. I have sliced and diced it and used it so many times that I don't even remember which pattern it originally came from! I have made it in every fabric there is...so yes this would be in the shoebox of patterns that I would take with me.
3. TNT Pants Pattern
Take every sentence I wrote above and change the word skirt to the word pants! I even have this pattern in several pant leg widths. So this one would go too.
4. TNT Dress Pattern
I actually know where this pattern originated from - Butterick 5932. However, my pattern looks nothing like the original! A have imagined this dress into everything...a Chanel knock-off, a jumper, a dress with a pleat down the front and who knows what the future holds for it! Definitely coming along!
5. Vogue 7944 Jacket
This pattern has only recently been added to my TNT list. It is a notch collar jacket that makes up easily and has seen three renditions in my wardrobe...well one is in the post production stages...but if I needed a great little jacket for any event, this would be the one!
6. TNT flare skirt
This skirt pattern started life as a one piece, floor length, bias cut skirt which I made at least 10 versions of before I cut it apart. After it was cut apart, I shortened it, changed the grain line not once but twice and generally ended up with a pattern that works for all occasions. It was an important piece in my Jackie Kennedy knock-off suit as well as used for my DD's Easter skirt. Definitely sticking this one in the shoebox! 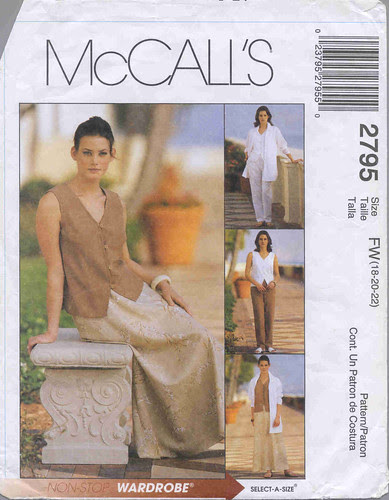 7. Simplicity 3631
When Simplicity issued this pattern and then Sew Stylish dedicated a magazine issue to its usage, I was intrigued and in awe...an entire issue about taking a pattern and making it your own! You know I had to make some garments from it! After much wrestling and pattern alterations, I have managed to make it a TNT pattern. This pattern offers so much and I haven't begun to explore all the variations yet, so this one would most assuredly make the trip!
8. Burda Twinset
I love twinsets and I suffered through the fitting and sewing of several big 4 patterns before I stumbled onto this one. I loved it so much that I bought two copies of it so that I would never have to worry about having it. This has been lengthened to dress length and fingertip length. I have shortened it and made from thin, thick, ribbed and rayon knits. It is a workhorse and a vital part of my wardrobe...into the shoebox it goes!
9. Tamotsu dress pattern
Its funny that shirt dresses are so hot this spring because this classic style has been in my TNT collection for at least 5 or 6 years. The first time I made it from a lt periwinkle blue linen, I knew I had a winner. It has subtle waist shaping, and an easy to apply collar and collar stand. The original pattern came with short sleeves but my best rendition of the pattern has long sleeves. Its been made in several fabrications and my next version will be an embroidered eyelet sleeveless version for spring. This pattern is seasonless and a classic. It would definitely go with me! 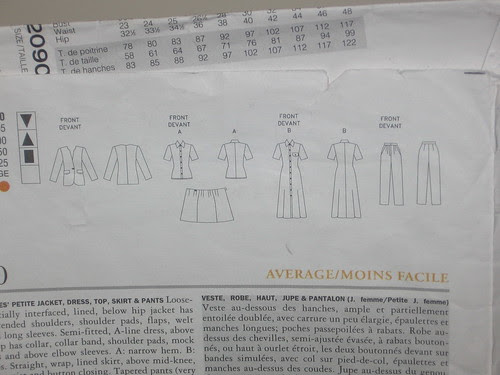 10. Vogue 2285 Jacket
Another hard-working jacket that has been altered from the original pattern! I have used it in several skirt suit outfits, it was the basis for my Easter suit jacket and it's original inception was as an eyelet jacket for spring. This pattern is another great jumping off point...I can use it and end up anywhere!
So Lisa has asked others, "What would they take?" And now I'm asking? What TNT patterns would you take, if you could only take 12? Also, do you use TNT patterns or are you a one-time only user? Think about it and let us (me and Lisa) know!!!

***Special Note***
I am pulling the names for the free Threads magazines tomorrow instead of today! So if you thought it was too late to enter the free giveaway its not! Leave a note tonight 'cause I'm definitely pulling the winner(s) tomorrow!!!!
Til tomorrow!!!
Posted by Carolyn (Diary of a Sewing Fanatic) at 5:06 PM