"You are making great progress on your SWAP. Three pieces, including the jacket, which is one of the more labor intensive pieces. It seems like you planned out your SWAP work load really well."

Audrey left this message in the comments today and it made me think.  This is my 4th SWAP "contest" so I do have an idea of how to sew for one...but more importantly, I think that everytime you participate in one, you hone your wardrobing skills just a little more.

There are several things that I'm doing differently this time around because of my experience in the other three SWAP contests.

1.  No storyboard
I know that this idea is considered heresy because the storyboard is the starting point for most sewists when they begin a SWAP.  Technically, you really do need one since the entire point is to "Sew With A Plan."  However, I've found that being so tightly bound to a list limits my creativity and causes me to be bored with the plan before it's finished.  Then I start to sew other stuff in the meantime and I wind up doing all night sews at the end just to complete the SWAP...so NO storyboard!

2.  Sew the most complicated garments first
This is when your enthusiasm for the process is most high.  Knock out those all-encompassing pieces first.  It allows you to feel a measure of success and will encourage you to press on to the finish line.

3. Don't be married to your plan
THIS IS A VERY IMPORTANT ONE!  Make allowances to veer off on another path.  That's why I just purchased the last piece of fabric that I need for my plan...and there are still chances that something can change! *LOL*  Leave room for creativity or inspiration to strike...you just never know...you may end up with an amazing reversible dress!

4.  Don't enter the contest to win
This might be controversial but what the h*ll, my blog, my opinion.  I've never seen a plus size woman win this contest anywhere.  I don't know what's up with that, but I'm of the firm belief that I can't win this contest due to my size...so I'm making a wardrobe FOR me!  The prize is that I will have all of these great new garments in my wardrobe and I will feel wonderful wearing them!

And this is the biggest change of all for me and this SWAP...most of the garments will come from new patterns and not a TNT pattern!  Now I'm not going to remake the wheel for a pair of pants and even one of my dresses is from my TNT dress pattern, but most of the tops in this SWAP are from untried and new patterns...the ratio is something like 40% TNT and 60% new!  Yeah, I know...

Here's a preview of some of the new patterns that will be incorporated into my SWAP: 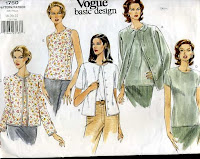 So that will be four new patterns included so far in the collection...there's a chance that one more will yet make the cut!  I also chose a different color this year...in the past I've used basic colors or in the case of my first SWAP a brightly colored lime for a summer SWAP that didn't really impress anyone...even me!  *LOL*  The choice of color (navy) was to expand my wardrobe horizons and hopefully by working with it and some new color combinations, I won't be bored!

I will be working on the bottoms or the two pairs of pants for the SWAP this weekend.  I want to get them out of the way so that I can concentrate on the tops.  If you've noticed, I don't make a lot of tops and in the last SWAP I participated in, only two of the tops I included actually got any wear.  One got donated pretty quickly after the contest so I'm trying to make sure that each top that gets made this time will actually get worn.

That's an update on my SWAP...my thoughts...and a little bit of a sneek peak of where I'm going!

This is a new section that will be making periodic appearances here.  It will sometimes show up at the end of a post and sometimes it will be the post.  It will just be a bunch of thoughts that I want to share...

Tonight's Diary Bit is about my Vogue 8593 - navy blue doubleknit Michelle Obama knock-off dress.  It's been finished since December but today was the first time I wore it to work.  And I can't believe the number of compliments that I got on this dress.  Both bosses were impressed...with one saying that she couldn't believe how great this dress was...even the "evil one" in my office took a second look!  So even though I more than likely won't make this dress again...it was a home run!

Posted by Carolyn (Diary of a Sewing Fanatic) at 9:33 PM

Labels: Midnight at the Oasis SWAP 2010