I love Dancing with the Stars - USA Version! 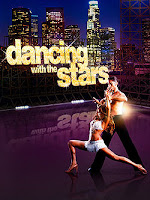 ...and I watch it faithfully!  I love how they pick a variety of athletes, actors, comedians and actresses to dance.  They've had some interesting people dance ~ the guy from Jackass (SteveO), Kate Gosselin, George Hamilton...and I've rooted for several of the winners (Kristi Yamugichi, Nicole Scherzinger) and a few of the non-winners (Mya, Mario Lopez).  I've also been surprised by how light of foot quite a few of those huge football players (Jason Taylor, Emmitt Smith & Warren Sapp) have been!
Now I'd like to suggest a few participants for a "professional" season of Dancing with the Stars...
Okay I know this has nothing to do with sewing unless I talk about the amazing costumes that they make for the stars each week... but if you like Dancing with the Stars ...who would you like to see dance on the show!?

BTW, I think Jennifer Gray has it in the bag for this season!