As you know I've made over 40 variations of my TNT dress pattern.  I've done this by copying the master pattern pieces and then cutting up the copies to achieve the look I wanted.  Then when I was finished with the pieces I would stuff them all back into the original pattern's file folder: 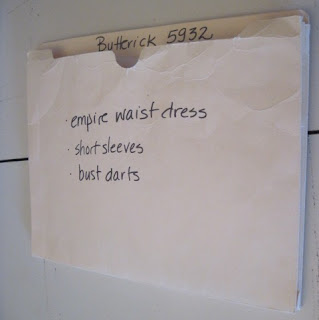 But lately this has really started to get on my nerves, looking through all of those pieces and trying to remember which pieces went with which dress.  So I got the bright idea to make separate folders for each version of the dress as I pulled the pattern pieces out and used them.  I now have 4 folders for four different versions of my TNT dress pattern. 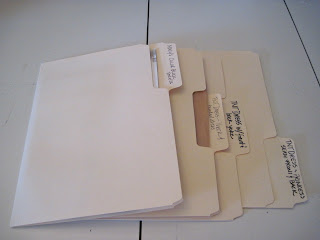 However, today when I went to look for a folder, I found that my description wasn't adequate enough for me to remember which v-neck version of the dress I've made.  So I went to my flickr account and printed out pictures of the dresses and taped them inside the folder. 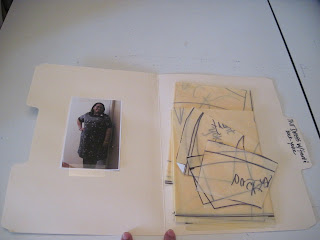 I had already placed a copy of the Macy's ad
inside the pattern pieces for the Macy Dress. 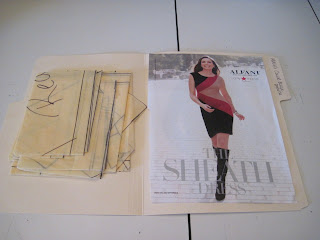 Now when I need to make another one of my TNT dress variations, I can easily flip open the folder and see not only the pattern pieces but a picture of the completed dress.

And yes, I'm sewing...even though the super has cleaned out all of the parking lots he still hasn't managed to snow blow out all the sidewalks yet...so I'm stuck in the house!  'Cause there was no leaving the state of NJ this morning since all bus service was suspended.  Hopefully everything will be back up and running this evening.

As an aside, I was reading an article in the January 2011 issue of Bazaar, "The Untold Jackie O" by John Loring.  He wrote a book with the same title that was recently published and the article is an excerpt from his book.  What struck me was when he talked about the designers that Jackie loved to wear..."obsessed" was the word he used to describe how she felt about Carolina Herrara (and I can understand since she is one of my favorites too!) and that she was wearing a dress designed by Sybil Connolly (another one of my favorites!) for her official White House Portrait. 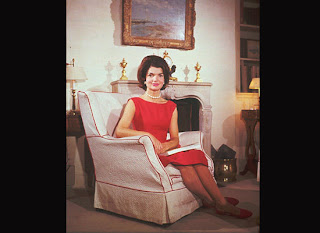 courtesy of  The Huffington Post
I haven't decided whether or not I'm going to read the book yet but I was just tickled to learn that fact!

I'm headed back to my sewing machine.  I will have pictures of the finished dress soon.