Yesterday was moving day...in the middle of a snowstorm.  Yes, that's right...the snow that was anticipated to arrive around 2-3pm actually showed up at 10:45am in my neighborhood.  I know.  I looked at my watch at that time because I couldn't believe that the rain had turned to SNOW!  It snowed the entire time of the move, as well as, well into the night.


However, I am all moved in and typing this post from my new sewing room.  My amazingly disorganized and stuffed to the brim with fabric totes bin...but in nevertheless.  I wanted to share a few moving observations while the horror of it was still fresh in my mind.  Horror because I HATE moving, not horrible because the move was bad.  Actually, the movers were fantastic.  Funny, fast and unperturbed by the snow...if anything the snow caused them to move it along a little quicker...


Some observations:
1.  As stated above the movers were fast, funny and professional.  They were such good sports about moving in that horrible weather and even took the time to wipe the boxes off before moving them into the house, that I'm sure I overtipped them.  But they did make moving extraordinarily easy.


2.  Ummm no I don't sew for a living and no I won't make you anything...enough said about that!


3.  I have alot of fabric.  I know I have alot of fabric.  And yes, I did have two large garbage bags full of fabric after the great pack up to donate, as well as giving two large 20 gallon totes of fabric to my daughter.  I have culled quite a bit...so no I don't want to donate any more.  Yes, I'm quite aware of the fact that I won't be able to sew it all in my lifetime...but that's why I have daughters! *LOL*  It will be their problem to deal with once I'm gone.


4.  The room diagram my friend John made up for me works.  Of course the room needs a little tweaking...but having some directions made getting all the items in far easier.  Now unpacking...I'm going to be doing that for weeks!  My computer is up and next is the sewing machines and after that the boxes.  Thank goodness I don't go back to work until Tuesday morning.


5.  My bedroom is in the best shape of all the rooms since I bought new bedroom furniture, someone else built it and made sure it was right.  All I have to do there is hang up my clothes because while I was waiting for some tech to come and hook something up, I filled all the drawers.


6.  Of course last night after going through everything, I noticed a missing box which I have no hopes of recovering...especially since this same thing happened the last time I moved and I swore that I would be more careful this time...box still went missing! *sigh*


7.  I'm broke.  Moving is terribly expensive and I don't want to do this again any time soon!  Last time was 6 years ago.  I'm hoping that I can stay here another 20 years...I'm getting to old for this!  *LOL*


Finally because I have no shame, a few pictures of the mess that currently is my sewing room: 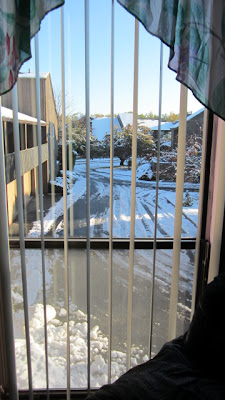 Picture from my new bedroom window
early this morning so you can see the snow! 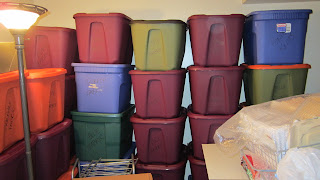 The wall of fabric bins 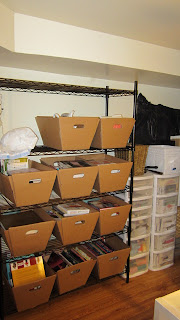 The new home of my book collection
Some day it will come out of the totes! 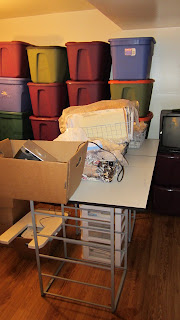 The sewing table that needs
to be set up

Of course, I'll post pictures when the room is finally in shape and receiving visitors - but doesn't the floor look good!  My daughter did a great job of putting it down!